After a refugee team featured for a second time at an Olympic Games in Tokyo, six athletes will also compete this month as part of the Refugee Paralympic Team. 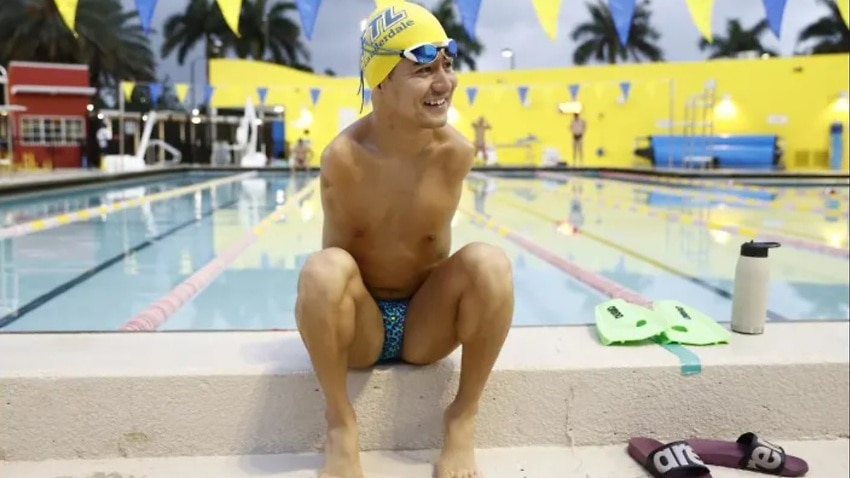 Of the world's 82.4 million refugees, 15 per cent - or 12 million people - live with a disability. Bringing attention to this group this month will be six athletes who have been selected as part of the Refugee Paralympic Team.

The size of the team is three times larger than the two athletes who formed the first-ever refugee Paralympic team, which debuted at the 2016 Rio Games.

Born in Greece, Syrian refugee Alia Issa has made history as the first female athlete to represent the Paralympic Refugee Team.

Alia Issa says she is on a mission to empower women with disabilities to become athletes. Source: Getty Images/International Paralympic Committee

After surviving smallpox as a four-year-old, Issa suffered brain damage affecting her intellectual and physical capacities. She now competes internationally in the club throw event for athletes unable to grip a javelin, shot put or discus.

She discovered the sport three years ago after the death of her father due to cancer.

"Being introduced to sport three years ago was very important to me," she said in an interview with the International Paralympic Committee. "I felt stronger and more confident with my body and mobility."

She says empowering more women with disabilities to get into sport has become her mission.

"Do not stay inside your homes," she said. "Get active. It will give you your independence and a way to be included in society."

'Talent in my feet'

Afghan refugee and para-swimmer Abbas Karimi was born without both arms.

That did not stop him from becoming the first refugee to win a World Para Swimming Championships medal when he took silver in the S5 50m butterfly in 2017.

His disability and ethnicity made him a target in Afghanistan, forcing him to flee at the age of 16 through the Zagros mountains to Turkey where he lived for four years.

He eventually resettled in Fort Lauderdale in the United States.

He says his philosophy on life has totally transformed through swimming.

"I believe God took my arms by mistake, but he gave me a talent in my feet," he told US TV network NBC.

When he first learned how to swim at the age of 13, he had his doubts.

Using a life jacket, he completed a 25-metre swim along the length of the pool and eventually developed a dolphin kick stroke technique that propelled him to win competitions in Afghanistan.

He said the experience took his life on a new trajectory for which he will be forever grateful.

"I believe without swimming, I’d be a very dangerous person, I’d be in trouble," he said in a post on Instagram. "Swimming opened my heart. It's in my soul."

UN High Commissioner for Refugees Filippo Grandi says he feels positive that the team will inspire and deliver hope.

"They are truly trailblazers in promoting refugee and disability inclusion, in elite sport and in life, and we hope their example will move us one step closer towards an inclusive and equal world for all," he said.

Stateless athletes were initially allowed to participate in the Olympic and Paralympic Games under the category of 'independent athlete'.

Western Sydney University Emeritus Professor David Rowe has written about the intersection between sports, culture, politics and human rights. He says there is a growing recognition in international sporting competitions to remove barriers of entry for stateless athletes.

"The role of sport as a social, cultural and political entity is on the rise," he told SBS News.

"And across all areas of sport [we're seeing this phenomenon]. For example, there is a Homeless World Cup in football. And football, because it is the global game, has pioneered many of these initiatives."

On Monday, Canadian footballer Alphonso Davies, who plays for Bayern Munich, showed his support for the Refugee Paralympic Team in an open letter.

Davies was born in a refugee camp in Ghana.

"Not everyone understands the journey you have been on, but I do ... You are the most courageous sports team in the world right now," he wrote.

Professor Rowe says the issue of stateless athletes seeking asylum also becomes a salient issue that emerges when the spotlight is on refugee athletes.

"That is why in authoritarian countries ... the sporting teams, are kept very tightly under wraps to stop them from making an asylum claim."

"And in many cases, if there is a suspicion that they may, they are refused entry into the host nation."

Last month, chef de mission of the Tokyo Refugee Olympics Team Tegla Loroupe, a Kenyan former marathon runner, urged Australia to "open their arms" to refugees ahead of Brisbane being chosen to host the 2032 Olympics and Paralympics.

Tegla Loroupe has called on Australia to end its policy of detaining asylum seekers and refugees. Source: IOC

In an interview with the South China Morning Post, she called on Australia to end its policy of detaining asylum seekers onshore and offshore.

"The more you keep someone in that hotel the more you are feeding them [and spending money], so you are making the wrong decision," she said.

"Many human beings are there because they were oppressed so why you want to oppress them again when you have the opportunity to help?"

Other former athletes have also added their voice to calls for Australia to consider more refugee resettlement options.

The trip was part of a campaign backed by human rights group Amnesty International to end Australia's detention of asylum seekers and refugees.

Foster says athletes are seeing they have a bigger role when it comes to sports and their role in society.

"And therefore the IOC, and FIFA and FIBA and Formula One all of these global sports, institutions have a broader responsibility to contribute to creating and helping shape a better world in future.

"The time when sport purported to - or that it was necessary for sport to stand aside from issues that it deemed to be political - is over. Today, athletes are saying that they and sport need to do much more."

The Tokyo Paralympics will take place from 24 August until 5 September 2021.