Every day for almost a week, Manette Sharick and her young daughter would wake up to find the word "black" erased from their Black Lives Matter chalk drawing.

A neighbourhood in the US has rallied around a mother and her daughter whose Black Lives Matter drawings were repeatedly altered by a white man outside their home.

For almost a week, Manette Sharick and her three-year-old daughter Zhuri, who are black, drew "Black Lives Matter" in chalk on the footpath outside their California home.

The movement was prompted by the killing of unarmed black man George Floyd at the hands of police, which has sparked widespread protests around the globe. 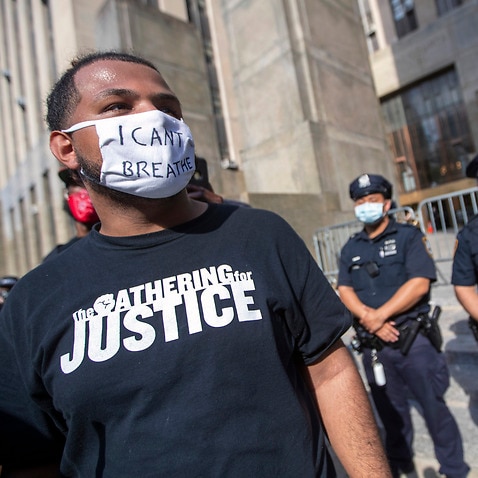 Ms Sharick told CNN she wanted to teach her daughter that "black lives matter, black culture matters, black communities matter, and that [we] are the movement for black lives".

But each time they drew the message, they would wake up the next morning to find the word "black" had been erased.

Ms Sharick said she was "shocked that someone could be purposefully doing this".

"It hurt a lot, it made me extremely upset," she said.

After four days, Ms Sharick's security camera caught a white man on a bike pouring water over the word to wash it away.

The mother posted an eight-minute video on Facebook of her confronting the man, reported to be named Jim,  who says he will continue to do so "as long as she keeps on doing this". 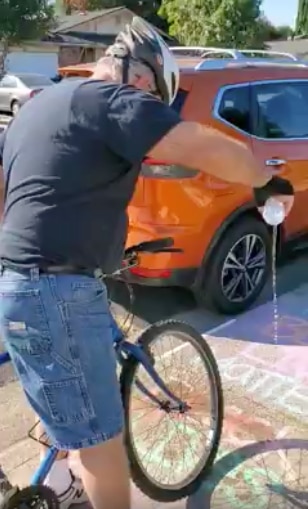 "You are racist, and you are on my camera, too. I will call the police. Keep on moving," Ms Sharick can be heard saying.

"You can't make me go. No, you can't," the man responds. "You call the police and I'll stay right here."

The man later says, "God bless your daughter", before Ms Sharick fires back.

"God bless you too. You and the way you think, you racist a** ... You come prepared with water bottles so you can erase this every f****** day? You have that much hatred in your hearts about blacks..."

"This is my neighbourhood," the man responds.

"So what? You can ride up and down this neighbourhood all you want to. But mind your business, and leave this s*** alone," Ms Sharick replies. 'As Black Lives Matter protests continue in Australia, so does racism. Here's how you can help'

The man later told CNN affiliate KGO he only poured water across the word because "[he] believes that all lives matter".

"I don't care what nationality, sexual orientation or any of that, we are all human beings," he said.

He goes on to say he is "not a racist" and that he thinks the Black Lives Matter movement has been "hijacked".

Ms Sharick wrote on Facebook she had filed a police report and planned to file a restraining order.

A neighbourhood shows up

After posting the video on social media, support from the family's community began to flood in.

Neighbours started writing similar supportive messages on the footpath and in front of their own homes, while others sent gifts and donated chalk.

"Thank you to everyone who has come out to stand with me and support the Black Lives Matter movement!" Ms Sharick wrote on Facebook on 2 August.

Ms Sharick later told CNN her family was "deeply thankful" for the help and support they have received from the community.

She and her daughter have reportedly continued to write their message on the foorpath every day. So far, the word "black" has not been erased.