The nephew of David Dungay Jr, who died in custody in NSW, says there are striking similarities between the death of his uncle and George Floyd.

The family of Aboriginal man David Dungay Jr, who died while being pinned down by five prison guards in December 2015, says there are startling similarities between the United States and Australia when it comes to deaths of black people at the hands of police.

Mr Dungay, who was 26 when he died, was weeks away from being released from Long Bay jail when prison staff ordered him to stop eating biscuits. When he refused, guards moved him to another cell and held him down.

In CCTV footage, Mr Dungay could be heard saying "I can’t breathe" at least 12 times.

The nephew of David Dungay Jr says seeing the video of George Floyd's treatment at the hands of police in Minneapolis has driven home the suffering faced by both communities in the US and Australia. Twitter users pointed out the similarities between what's happening in the US and Australia.
AAP

"I want to send a message of solidarity to everyone on the streets in the United States fighting for justice for George Floyd. I really feel for the family of George Floyd and want them to know we feel their pain and stand with them.

"The masses of people on the streets in the United States calling for justice is amazing. That is the only force that can hold the police accountable. More people are starting to realise the injustices against Black people and against First Nations people everywhere," Paul Francis wrote in an online post.

He said the video of George Floyd's violent arrest has moved many, but for him the similarities between what happened to Mr Floyd and his uncle were startling.

"When I saw the video of George Floyd being murdered, I had to stop the footage. It took me straight back to when I first saw the video of my uncle’s death. Both men died from “positional asphyxia”. This happens when police or prison officers restrain someone face down with too much pressure.

"Both men were continuously saying “I can’t breathe” and begging for their lives. Both men had multiple officers restraining them, pushing them into the ground and ignoring their cries for help, until they took their last breath."

'Our struggles are entwined and united'

Meanwhile, Australian social media users have been outraged at the death of Mr Floyd after his arrest by Minneapolis police, sharing hashtags such as #Ican’tbreathe and #BlackLivesMatter.

As the protests ramped up across the country in the United States, Indigenous activists and voices were quick to point out the similarities to various Aboriginal deaths in custody cases here as well noting that sometimes it is easier to look abroad then closer to home. 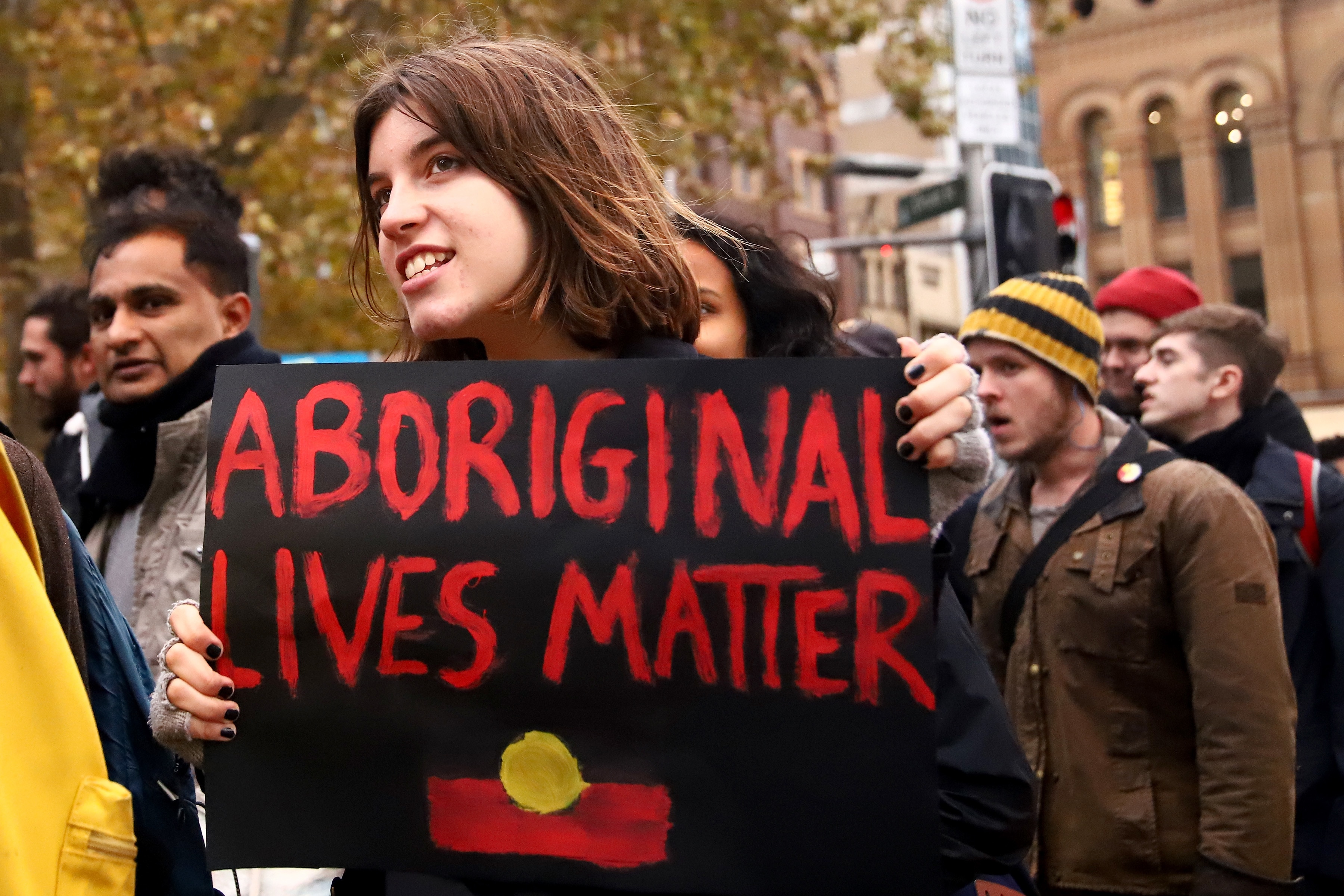 Protesters during the Black Deaths in Custody Protest at Town Hall in Sydney on Saturday in 2018.
AAP

Journalist Amy McGuire noted on her blog the lack of media coverage and outrage over the deaths of Aboriginal woman Joyce Clarke and 19–year old Aboriginal man Kumanjayi Walker, both cases which have seen police officers charged with murder.

"But despite both communities coming out immediately in protest, the deaths of Ms Clarke and Mr Walker have failed to reach the same level of Australian outrage when it comes to cases far from our own home," she wrote.

"Our struggles are entwined and united. If you want to support ‘Black Lives Matter’, support it in this country too," she goes on to say.

"For Aboriginal people, every death, every injury, every grieving mother, is remembered. They are not just numbers. We remember and we watch and we protest in the face of this national silence," she added.

While we witness the outrage happening in the US, we can never forget the injustice of this nation that is also built on genocide and the disposition of Black bodies.

It's always easier to look outside rather than our own backyard. https://t.co/QAt18HvuMV

Others on Twitter pointed out the hypocrisy of those who were quick to condemn what is happening in the US.

“You can’t support the “Black Lives Matter” movement internationally if you do not support or care about black/aboriginal lives here in Australia!” Alec Doomadgee wrote on Twitter.

You can’t support the “Black Lives Matter” movement internationally if you do not support or care about black/aboriginal lives here in Australia! https://t.co/94c9f7tXop

“While we witness the outrage happening in the US, we can never forget the injustice of this nation that is also built on genocide and the disposition of Black bodies. It's always easier to look outside rather than our own backyard,” another Twitter user Rafeiflsmail wrote.

Readers seeking support and information about mental health can contact Lifeline 24 hours a day online and on 13 11 14. Other services include the Suicide Call Back Service on 1300 659 467, Beyond Blue and Kids Helpline (for people aged five to 25) on 1800 55 1800. More information is available at Beyond Blue.