A car has hit pedestrians on Melbourne’s Flinders Street resulting in the arrest of the driver - who police say has a history of mental illness.

The driver, 32, has been arrested after a car ploughed into 19 pedestrians on Flinders Street.

A second man, 24, was initially arrested but police have since said he has no links to the incident.

Victoria Police are currently attending the scene of the incident between Elizabeth Street and Swanston Street.

Police officers will remain at the scene for the foreseeable future - at least until 7am tomorrow.

Police say the driver of the vehicle, was arrested by an off-duty police officer. 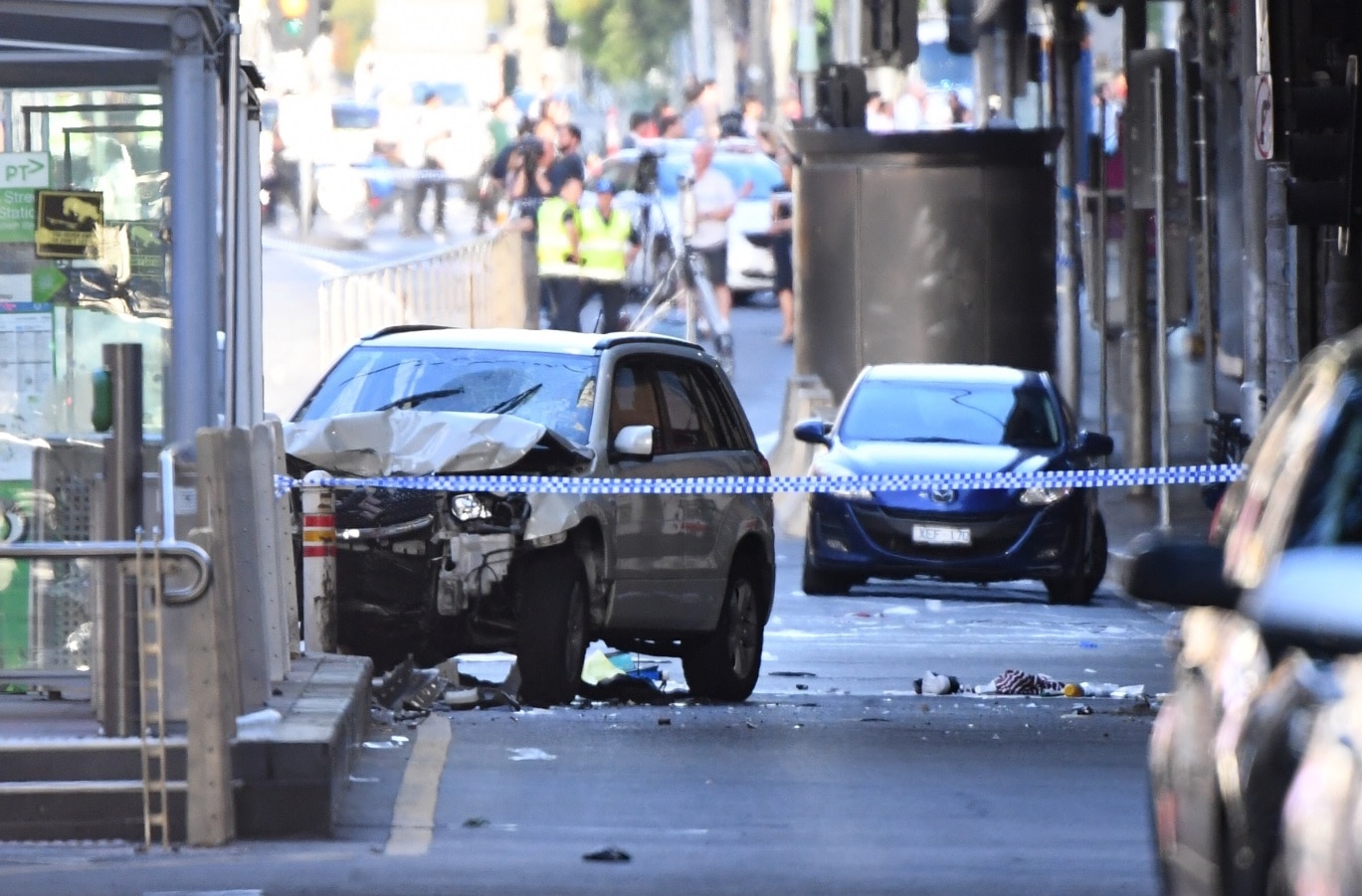 A damaged vehicle is seen at the scene of an incident on Flinders Street, in Melbourne, Thursday, December 21, 2017.
AAP

Police said the driver, an Australian citizen of Afghani descent, had a history of mental illness and did not have links to terrorism. He was taken to hospital and remains under police guard.

"The officer sustained shoulder and hand injuries during the arrest and has been conveyed to hospital," a police spokesman said on Thursday night.

Police said the driver was the only person inside the vehicle during the incident.

Nineteen pedestrians were injured in the incident and all were taken to hospital. Two others were also treated for non-collision related injuries.

Among those injured were five men, six women and one four-year-old boy.

Victorian Premier Daniel Andrews said the incident was an 'act of evil and cowardice'.

He praised police for being on scene within seconds of the incident occurring.

“Stay safe, check on your loved ones and thank you to our brave emergency services,” he tweeted earlier in the day.

Commander Russell Barret told media earlier today that police suspected the act was ‘deliberate’ however the motive was unclear.

“Police will continue to have a strong presence in the Melbourne CBD tonight,” Commander Barrett said.

As you will know, there's been a horrible incident on Flinders St. Police have secured the scene and will provide info as it's confirmed. Please avoid the area. Trains running but trams affected. Stay safe. Check on your loved ones. And thank you to our brave emergency services.

“We understand that this has been a very traumatic event… and there will be witnesses, victims and family members affected.”

“We believe based on what we have seen that it is a deliberate act. 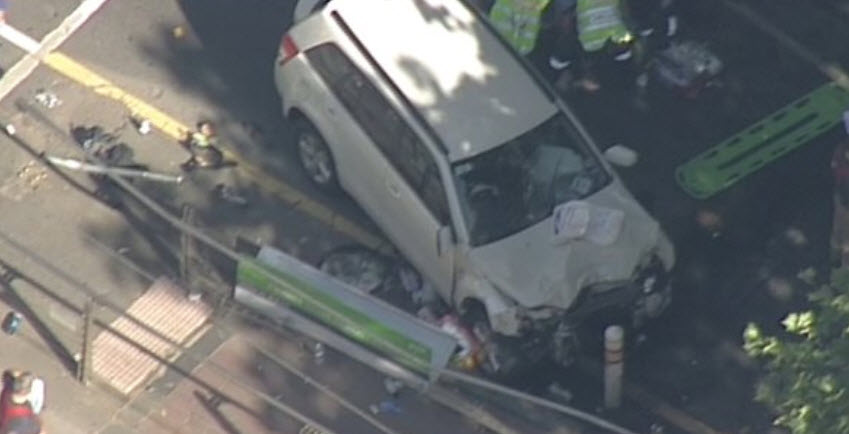 A photo of a crashed car filmed after pedestrians were hit in Melbourne.
SBS News

“The incident occurred when the vehicle struck a number of pedestrians in front of Flinders Street Station just after 4.30pm,” she said.

The extent of the pedestrians' injuries is unknown at this stage but includes a pre-school aged child with head injuries. An aerial photo of a crashed car in Melbourne after more than a dozen pedestrians were hit.
7 News

Police are asking any witnesses to go to the Melbourne West Police Station at 313 Spencer Street, Melbourne and all vehicular and pedestrian traffic have been asked to avoid the area.

Police are currently attending an incident on Flinders Street between Elizabeth and Swanston streets where a vehicle has collided with a number of pedestrians. Police have arrested the driver of the car. Extent of injuries are not known at this stage. (1/2)

Police are asking any witnesses to go to the Melbourne West Police Station at 313 Spencer Street, Melbourne and all vehicular and pedestrian traffic to avoid the area. (2/2)

"People are running everywhere. It's terrible."

Emergency crews rushed to the scene to help attend to the injured.

Ambulance Victoria said in a statement: “Paramedics were called to a report of pedestrians hit by a car at the corner of Elizabeth Street and Flinders Street at 4.41pm this afternoon. Paramedics are on scene.”

"Due to a major incident at the intersection of Elizabeth and Flinders Streets, passengers are advised to defer travel through Flinders Street Station," Metro Trains tweeted.

UPDATE Flinders Street: Due to a major incident at the intersection of Elizabeth and Flinders Streets, passengers are advised to defer travel through Flinders Street Station. Please interchange for services at City Loop Stations. pic.twitter.com/M4YVMi8Jsv

As our federal & state police & security agencies work together to secure the scene and investigate this shocking incident our thoughts & prayers are with the victims & the emergency & health workers who are treating them. https://t.co/JkUM9TuIQe

My thoughts are with Australia and the people of Melbourne- such a shocking incident this afternoon. Thinking of all the victims and their families.

“As our federal and state police and security agencies work together to secure the scene and investigate this shocking incident, our thoughts and prayers are with the victims and the emergency and health workers who are treating them,” he wrote on Twitter.

'It just mowed everybody down': Witness An aerial photo of the scene.
7 News

Witnesses told the Herald Sun they saw a white Suzuki hit a number of pedestrians crossing over Flinders St, one of Australia’s busiest intersections.

It's understood there was up to 60 people crossing the road at the time - the area was packed with people doing their Christmas shopping.

"The driver was speeding, it was horrific, I can't believe it," one witness claimed.

"There was people's bodies on the ground. I didn't know what to think (sic). Witness Sue who works at a doughnut shop in the area told 3AW she saw a white car approach the intersection where a lot of people were crossing the street at the time.

‘We turned to the left… we see this white car as it approaches the intersection – it just mowed everybody down… people are flying everywhere,” she said.

“Then we hear this thump…thump… the car must’ve hit the tram stop in the middle.”

Victoria Police has urged the public to share photos or images of the incident to assist with their investigation here: http://australiauploadserviceweb.cloudapp.net/