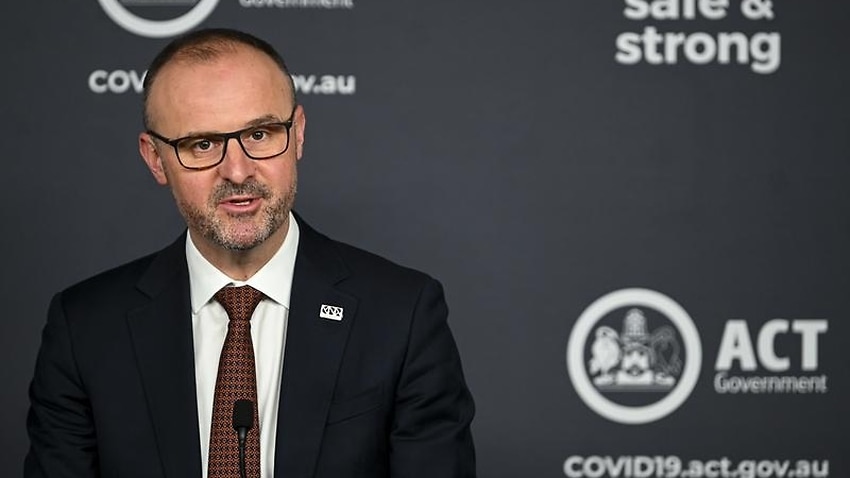 Chief Minister Andrew Barr is not backing away from reopening plans despite another 52 virus cases. (AAP) Source: AAP

A further 52 locally acquired COVID-19 cases have been reported in the ACT along with three more deaths.

The territory's total case count now stands at 939, of which 617 have recovered and 319 are active.

ACT health chief Dr Kerryn Coleman says 30 of the new infections can be linked to existing cases. Ten of them were in quarantine, the status of 13 are under investigation and 29 are known to have been in community for at least part of their infectious period.

Thirteen COVID-19 patients are in Canberra hospitals. Three of them are in intensive care and all three currently require respiration.

Chief Minister Andrew Barr says plans to end the ACT's lockdown as scheduled in a fortnight's time will depend on Dr Coleman's advice.

No one was walking away from the commitment to reopen, he said. However he continued to be concerned about the high case numbers and the high numbers also being recorded in neighbouring Queanbeyan.

"Our vaccination rates are a really significant way in which we can protect our community," he told reporters on Saturday.

Almost 92 per cent of ACT residents have now received at least one vaccine dose, while 63 per cent have had both jabs.

More than 3240 virus tests were also conducted in the ACT on Friday.

Dr Coleman said on Friday she hoped the ACT would not need to deviate from its mid-October reopening plan.

"All of that will play into next week's discussions. My aim is to leave the settings as we have announced moving forward," she said.

Mr Barr described Friday's new case number - also 52 - as a shock and an important reminder that the virus remained active in the community.

"When we get to higher vaccination rates and we start to further reduce our public health safety measures, daily case numbers like this will become the norm. We are not at that point yet," he said.

"I don't want to rule anything in or out based on one day's numbers. They're not good. They're not where we want them to be. But one day isn't a trend."

The ACT on Friday relaxed restrictions slightly, including allowing two visitors to a home.