Zaatari Refugee Camp is home to 80,000 Syrians – over half of them children – and is now Jordan’s fourth biggest city. TV chef, UNICEF Australia ambassador and father-of-two Adam Liaw tells SBS News what he witnessed there.

Kicking a soccer ball with one of the children in Jordan’s giant Zaatari Refugee Camp is like any game at the park with my son - until the child mentions that he hasn’t seen his father in the seven years since they left Aleppo in Syria.

Dancing with a little girl at a learning centre for children is like dancing with my daughter - until she turns her face and I see that one half is badly scarred, and she has been blinded in one eye by the fires of war. 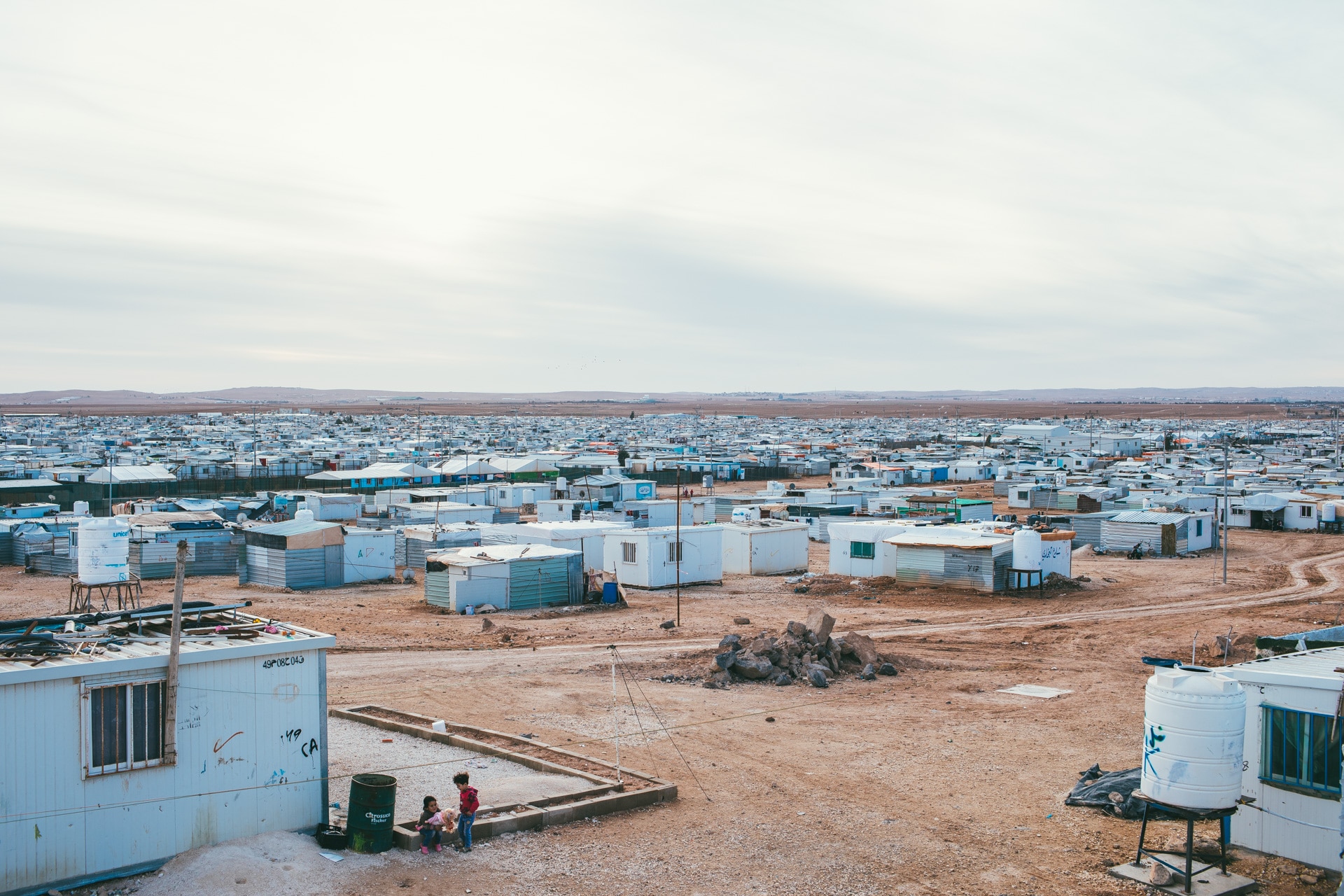 The Zaatari refugee camp is the largest of its kind in the world.
UNICEF Australia

It’s impossible to understate the human cost of the Syrian refugee crisis. In the seven years since the Syrian Civil War began, hundreds of thousands of people have been killed in the conflict, thousands of them innocent children. A further five million Syrians have fled to neighbouring countries, including Jordan, and an entire region now strains under the weight of humanity, depleted resources, and the uncertain future that war brings.

The Zaatari Refugee Camp is at the forefront of the effort to provide stability, shelter and assistance to the many who now find themselves unable to return home. Just 15 kilometres from the Syria-Jordan border, Zaatari has hosted nearly half a million registered refugees in the seven years it has been operating, and it now supports a stable population of around 80,000. More than half of those who live in the camps are children, and in my role as an ambassador for UNICEF Australia, it was my privilege to visit these camps to experience what life is like for the people who live there. Adam Liaw, centre, dancing with some of the children in the Zaatari camp.
UNICEF Australia

For me, the most striking aspect of the camp on first visiting is the size. I gasped when I saw it. It’s a sprawl of thousands upon thousands of dusty caravans and tents that stretch to the horizon, and without trees or other greenery to break the endless sea of monotony, it feels like it could go on forever.

When you see it up close, however, Zaatari is made up of much more than a sea of temporary homes. It’s made up of people, and children. A house inside the refugee camp.
UNICEF Australia

There are children everywhere. And it’s these children who tell the true story of life in Zaatari. When I ask them what they want to be when they grow up, every child has the same response – a teacher. Where opportunities for the future are so unclear, it’s the teachers who provide a glimpse of hope.

When I ask them what they want to be when they grow up every child has the same response.

There’s a school in each sector of the camp, and at least one Makani centre, a unique UNICEF initiative. Makani means “my space” and these community centres play a vital role in camp life, focusing on learning support, community outreach, psychosocial activities like art and music, as well as teaching life skills such as hygiene, health and nutrition. The children come to the centres daily, either before or after school, and some also work on stalls run by their parents, baking bread or selling corn, to earn a little extra money for their families. 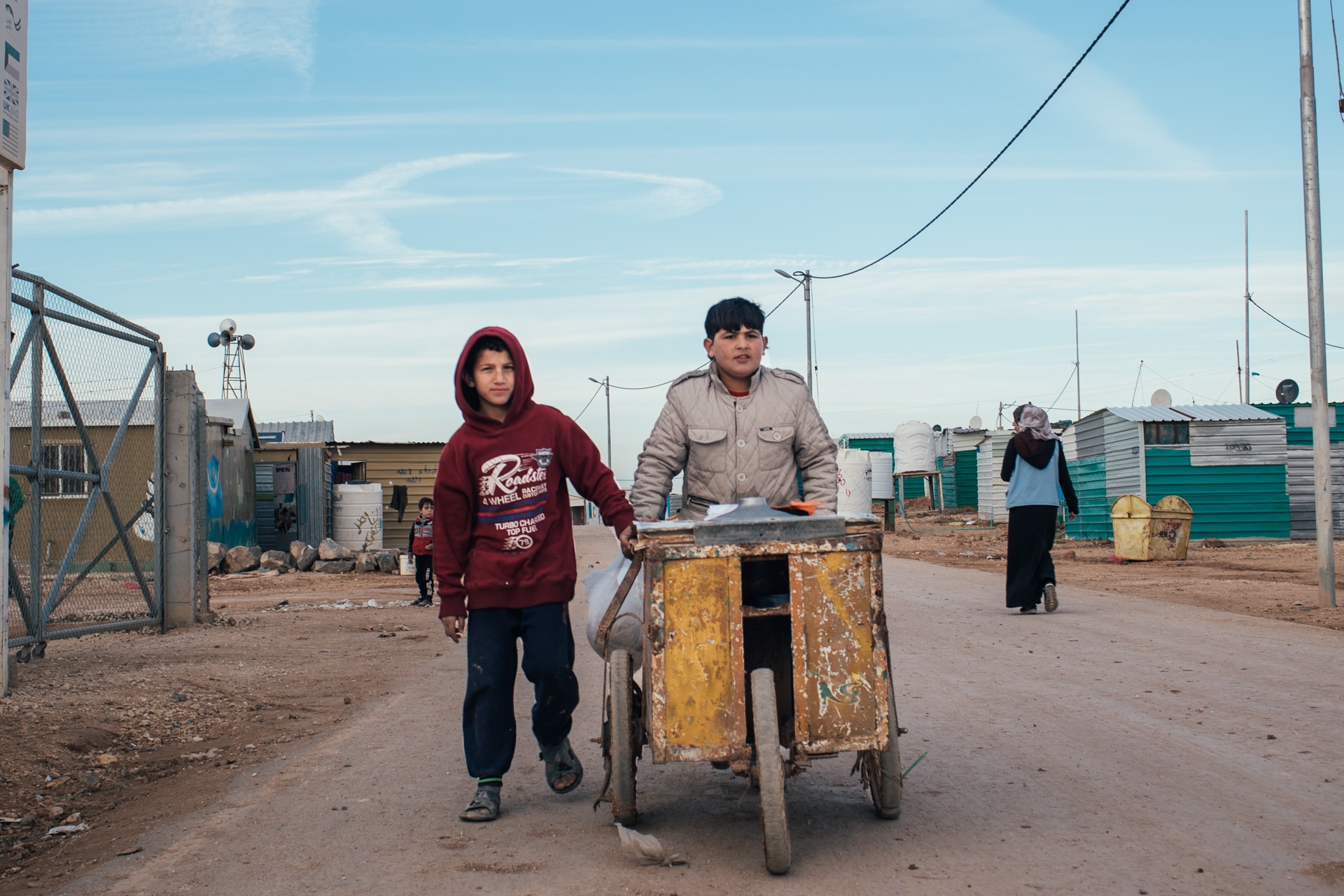 Through the children’s art created in these safe spaces, life in Zaatari is laid bare. When they first came to the camps, many children’s art depicted scenes of the war that dominated their thoughts – death, blood and destruction. After a few years, however, the art started to depict a more general sense of hope. They created images of nature featuring rivers, fish, birds and abundant, fruit-laden trees. I wondered why these were such common themes but then it struck me that some of these children had not seen a river in their lifetime, or even a tree as there is not a single one in the camp.

Some of these children had not seen a river in their lifetime, or even a tree

It’s that kind of simple revelation that shakes you. I drew pictures with the kids like I draw with my own children, and when in their company you focus just on the beautiful child in front of you. They are healthy, clean and smiling, and it’s easy to forget that these children have been through unspeakable horrors, are still going through so much, and face a very uncertain future. 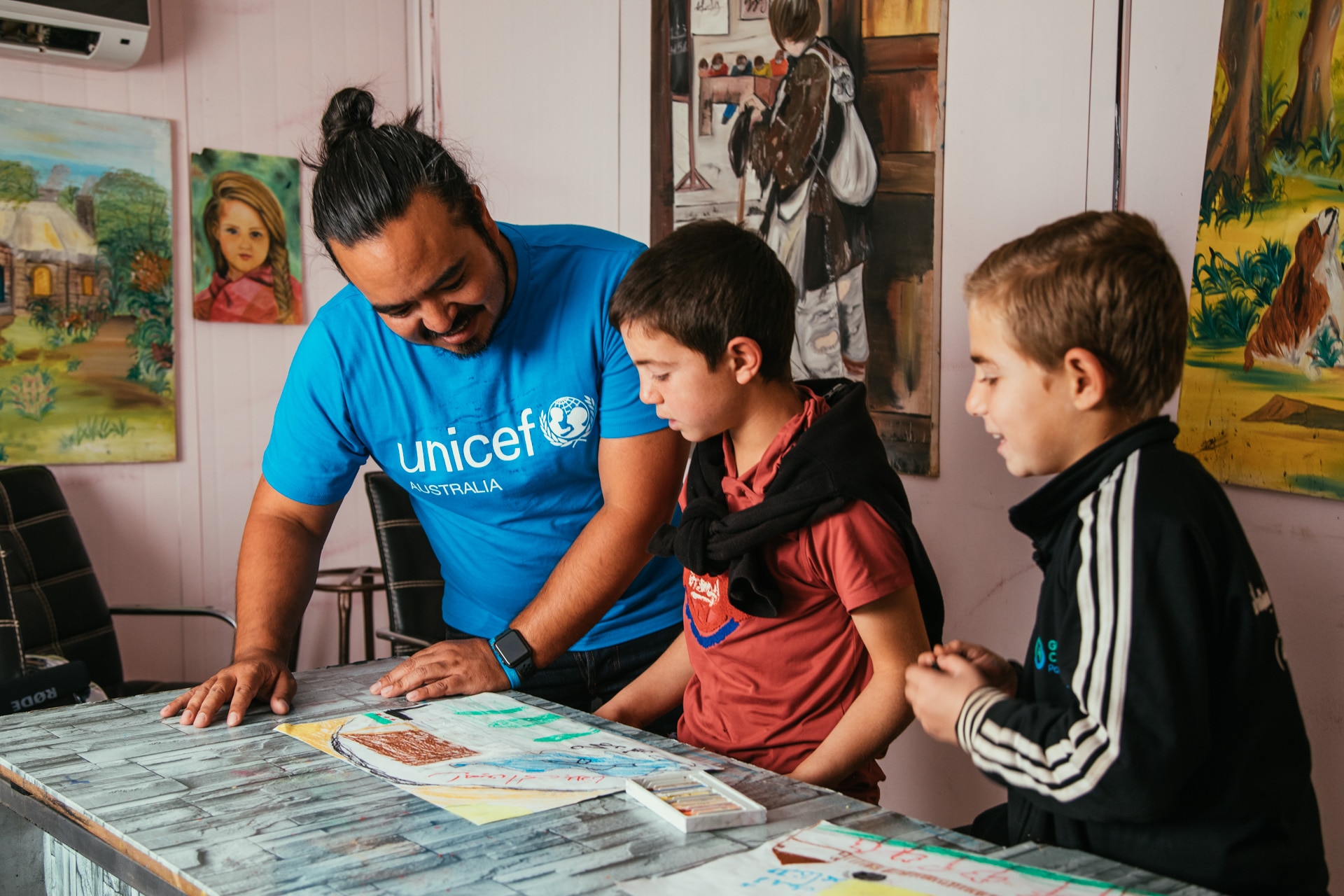 "It’s easy to forget that these children have been through unspeakable horrors". Adam Liaw, left, with Ahmed, right, at a Makani centre.
UNICEF Australia

Lately, the children’s art has taken another shift. An emerging theme of returning to Syria reflects what the children hear in conversations at home and in the community. I spoke with 12-year-old Ahmed who had drawn a picture of his family in a taxi, on their way to Syria. “They’re all smiling because they’re going home,” he said.

Perhaps in my mind before visiting Zaatari, I had expected wailing, breadlines, field hospitals and the hopelessness of people who have lost everything. But Zaatari is separated from the war if not wholly by distance, then at least by time. Most of the residents of Zaatari have been at the camp for more than five years, and while the horrors of war might have coloured the early days of the camp’s establishment, the feeling now is one of community.

I had expected wailing, breadlines, field hospitals and hopelessness

Through the centre of camp is a long market street known colloquially as the Champs-Élysées, named after a French field hospital that was on the street many years ago [and the Paris avenue]. It bustles with activity, crowded with shoppers and people who just come to meet friends and chat. A patisserie on the 'Champs-Élysées'.
UNICEF Australia

Operating an informal economy where goods are bartered, or sold for small amounts of cash, there are grocers, butchers, clothing stores and supermarkets, as well as food stalls selling shawarma [a Middle-Eastern meat dish], bakeries, and patisseries where Syrian sweets including konafa, maamoul and baklava are made fresh daily. The most popular stores though are those selling and servicing mobile phones – the main source of news, community, and connection to family and friends still in Syria.

That life in Zaatari is not one of utter despair and destitution is testament to the wonderful work that UNICEF and other agencies do in the field. From the nothingness of rocky desert, aid agencies provide food, water (3.3 million litres every single day), healthcare, security, shelter, education and employment. These tangibles are what keeps daily life running and they do it on a scale that it is nothing short of a modern miracle. That they do it with limited, and as I read while in Jordan, worryingly decreasing donations, is even more extraordinary.

The basic necessities of life that UNICEF is able to provide is what keeps these children healthy and fed, safe and educated, and holds the wolf from the door. But beyond these tangible basics there is an intangible element that can only be realised when a person doesn’t have to fear for their safety or worry whether they will eat tomorrow, and it’s that intangible element that I think these people need most – the freedom to hope for a future, and a return to the lives they left behind.

Later this year UNICEF Australia will hold its second #CookForSyria campaign. Anyone can host an event and proceeds go towards helping the many children affected by conflict in Syria. To find out more visit unicef.org.au/cook-for-syria.