The Queensland African Communities Council has responded to an Australian Press Council ruling on the Courier-Mail's 'enemies of the state' cover story from last year. 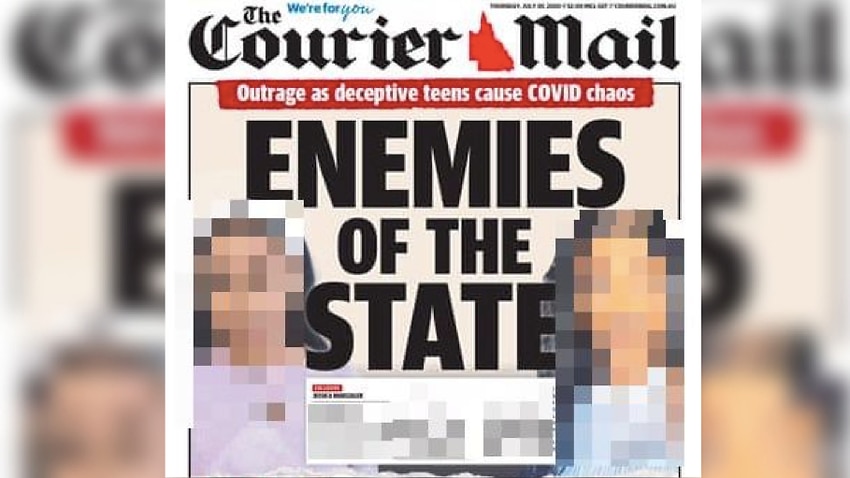 The newspaper cover identified the two women. Source: The Courier-Mail

The Queensland African Communities Council says it has “no confidence” in media regulator the Australian Press Council after it ruled a front page newspaper story labelling two African Australian women “enemies of the state” was not racist.

Responding to complaints made to the council, News Corp’s Courier-Mail denied responsibility for a torrent of racial vilification and death threats the women received after the story was published.

The newspaper published the identities of the two women who tested positive for COVID-19 and caused an outbreak in Brisbane and Logan last year. They were sentenced for making a false declaration when returning from Melbourne, which was a COVID-19 hotspot.

SBS News has chosen not to identify the women.

The Press Council ruling on Thursday said the story did not breach its Standards of Practice rules and publishing their identities “reflects the seriousness of the women’s actions” and was not due to “personal characteristics”.

“It’s a very disappointing outcome because it sanctions racism, it sanctions racial vilification and it sends a message that you can publish an article targeting a particular racial or religious group and that’s okay,” said the president of the Queensland African Communities Council Beny Bol.

“It shouldn’t be okay, it’s encouraging that sort of behaviour and it also diminishes the community confidence in the institution.”

“Given the outcome and the ruling we’ve seen, who would waste their time to lodge a complaint to the Press Council hoping that they would correct their wrong? I don’t have confidence in the way they handled the matter.”

The Press Council in its ruling said “at the time of publication, it was a matter of public record that the women … had been charged with criminal offences” over failure to comply with COVID-19 travel restrictions and so “their reasonable expectations of privacy had been diminished”.

“The Council acknowledges that the headline is provocative given the language used and the prominence of the women’s images alongside it …. [but] accepts that the reporting reflects the seriousness of the women’s actions and risk to the community and was not due to any personal characteristic of the women involved.”

The Courier-Mail in response to complaints to the Press Council said it consistently published names and pictures of people who had breached COVID-19 rules and “it could not be held accountable for the actions of people on social media”.

“The publication noted that the criminality of their actions had seriously endangered the state of Queensland. Accordingly, it said naming them was necessary in the public interest,” the Press Council ruling said.

“It said that the headline was entirely fair and appropriate given the severity of the crimes committed and the impact of the lockdown on business and the disruption to society.”

The two women, and a third who was involved, all aged in their early 20s, spent four nights in Melbourne where they attended a party before flying back to Brisbane via Sydney.

All three pleaded guilty to failing to comply with a public health direction.

They faced a maximum penalty of a $13,000 fine and six months in prison but were sentenced to community service orders ranging from four to eight months and were fined in Victoria for failing to comply with gathering restrictions.

Mr Bol is due to give evidence on Friday to a Queensland parliament inquiry into reforming the state’s 30-year-old vilification laws.

“It’s one of the typical examples that I incorporated into my submission," he said of the Courier-Mail's story.

"It’s racist, clearly racist, and sends a strong message to the community that you don’t belong here.”

“There should never be a relationship or correlations between the crime and the actions of individuals and their racial background and we’ve seen this again and again from particular media outlets."

“We should stand up and call such behaviour out.”