New Caledonia's Indigenous population, the Kanaks, are the driving force behind Sunday's independence push, but not all are in favour of severing ties with the French.

New Caledonia is in a small Pacific club with Australia and New Zealand whose Indigenous populations are outnumbered by those who have arrived since colonisation.

Known as Kanaks, their resistance to colonisation was brutally suppressed but never extinguished and has lead to a referendum on independence from France on Sunday.

Expectations are the result will be a “non” - but it is not the end of the process. New Caledonians gathered in Toulouse before the independence referendum on Sunday.
AAP

Some Kanaks reject independence and will vote with the large French migrant community, known as “Caldoche”.

There are also citizens of French Polynesian, Chinese, Japanese, Wallisians and Algerian backgrounds eligible to vote.

The word ‘Kanak’ derives from the Hawaiian “kanake maoli”, an expression of pride meaning “true person”, and was applied widely by the early Europeans in the Pacific to islanders.

New Caledonia was first inhabited about 3,000 years ago but there are no reliable figures on the population when the French arrived, though they are thought to have numbered in the tens of thousands.

French soldiers landed in New Caledonia in 1844. The first massacres are reported to have happened from 1847.

Formal annexation by France in 1853 saw the Kanak legally and politically disenfranchised and forced land seizures began around what is now the capital Noumea. What New Caledonia could look like after independence vote

A penal colony was set up in 1869 to help populate the island and land was allocated to convicts, which they would own when they had served their sentence.

Thousands of exiles were also sent from the Paris Commune and the Algerian Kabyles, who fought French colonial rule.

During this time “blackbirding” by forced-labour recruiters from Australia began.

Thousands of Kanak were kidnapped and put to work in Queensland’s agricultural industry before most were deported in the early 1900s under the White Australia Act after federation.

Many stayed behind and married into the Aboriginal and Torres Strait island communities, creating an enduring link with Australia’s indigenous people.

The arrival of the Kanak with the London Missionary Society in the Torres Strait in 1871, after their expulsion from New Caledonia by the French, resulted in the evangelising of Australia’s Indigenous Melanesians in what is today known as “The Coming Of The Light”.

By 1878 in New Caledonia, large tracts of the most fertile land had been seized and European diseases ravaged the Kanak population that lacked immunity. The Kanak economy collapsed, resulting in an uprising.

Over several months the Kanak launched deadly assaults on European settlements, but the French military retaliated with brutal force. 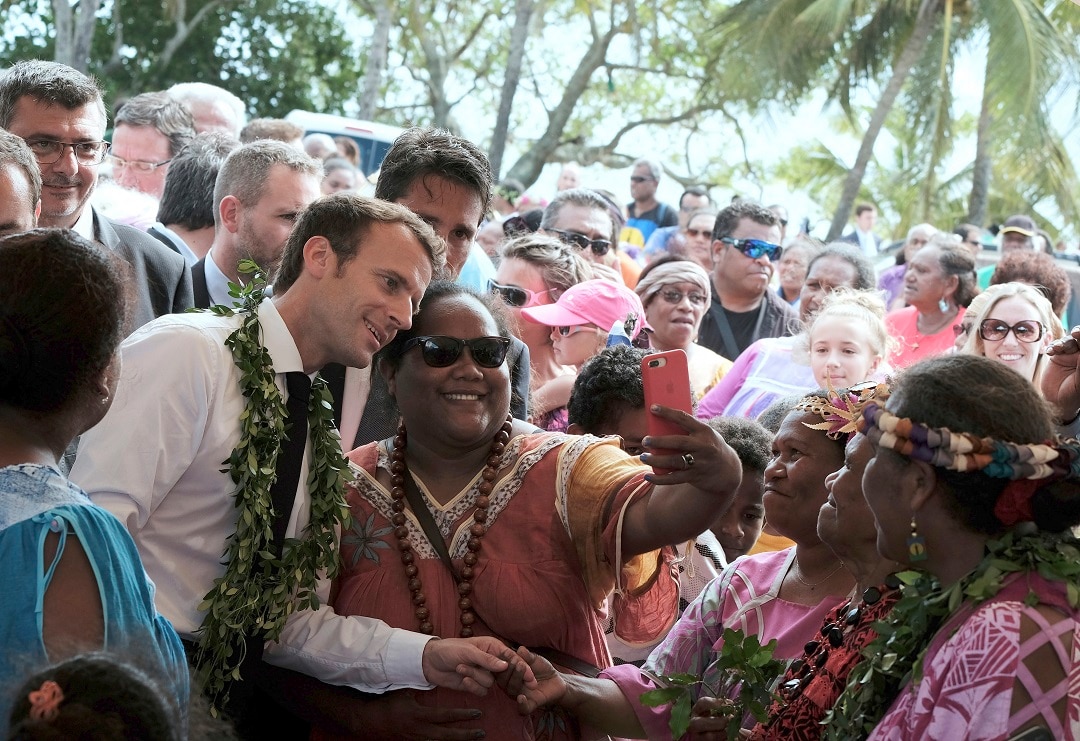 Hundreds of Kanak warriors were defeated and their leader Grand Chief Atai killed. His severed head was sent to Paris for display.

About 1,000 Kanak of an estimated population of 25,000 were killed, as were about 200 of the 16,000 Europeans in the colony during the short conflict that has marked relations ever since.

A second rebellion in 1917 was again brutally suppressed.

Having fought in the French military during both world wars, the Kanak were given citizenship and New Caledonia ceased being a colony and became French territory in 1956, with universal suffrage granted a year later.

At the time population numbers were roughly similar between Kanak and non-Indigenous but strong migration from France soon saw the balance tip as the economy boomed from nickel mining exports.

Another revolt in 1967 was suppressed but tensions again erupted into violence in the late-1980s.

Since 1984, the independence movement has called for the September 24 anniversary of the French annexation to be made the “Kanak Mourning Day” public holiday.

Led by Jean-Marie Tjibaou, the provisional government of the Kanak Socialist Republic was declared in December 1984. 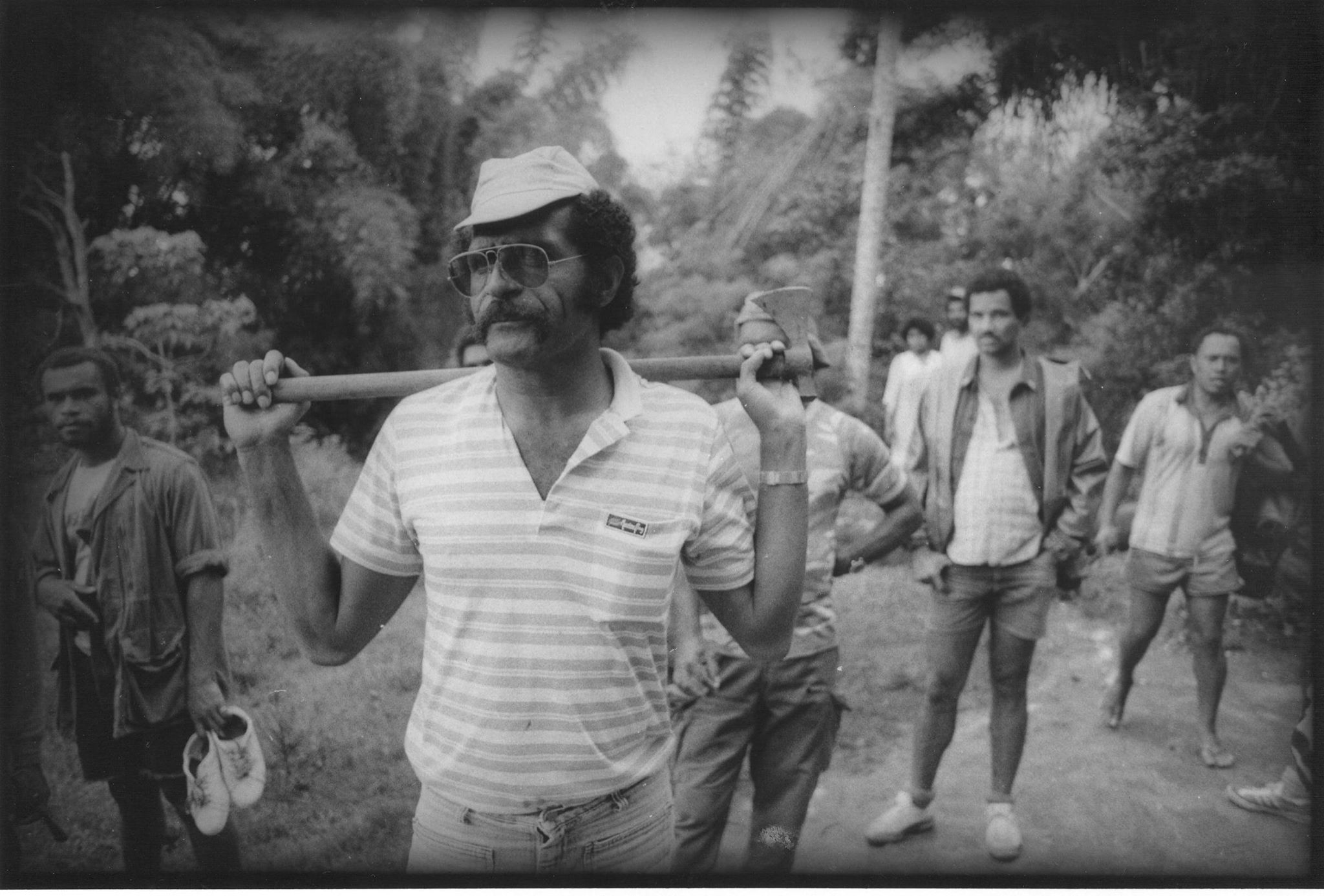 Kanak leader Eloi Machoro famously shattered a ballot box with an axe as part of a boycott of French elections.Credit: David Robie (with permission)
Supplied

An enduring image of the time is radical leader Éloi Machoro shattering a ballot box with an axe. He was later killed by a French sniper.

In a major victory in 1986, the FLNKS backed by the Pacific Islands Forum, Melanesian Spearhead Group and Non-Aligned Country Movement succeeded in having New Caledonia inscribed on the United Nations Decolonisation List of Non-Self-Governing Territories.

The increasingly violent struggle resulted in the Ouvea crisis in 1988. Young separatists attacked a police station and seized 25 hostages in a cave.

The Matignon Accord peace agreement emerged out of the conflict, signed by Jean-Marie Tjibaou, who was later assassinated by another Kanak who believed he was a traitor to the cause.

The Tjibaou Cultural Centre was named after Jean-Marie Tjibaou, who led the establishment of the provisional government of the Kanak Socialist Republic.
Supplied

French president Francois Mitterrand responded by ordering Tjibaou’s vision of a Kanak cultural centre be built as an act of reconciliation. The striking structure is a Noumea landmark.

A decade later the Noumea Accord signed in 1998 promised greater French investment and devolution of government power to bring equality and autonomy to New Caledonians, culminating in a series of referendums to decide the territory’s future.

The Accord recognised the impact of colonisalism on the “first occupants” but talks of a “double legitimacy”, referring to those who arrived under the French, with a view of creating a common destiny with a “Kanak identity and a future shared by all”.

But despite the 20-year lead-up to this Sunday’s referendum, Kanak people of New Caledonia are still substantially behind on almost every social and economic indicator.