Michigan Republican leaders delivered another blow when they said they have no information that would change the outcome of the presidential election in the state, and will follow the "normal" electoral process.

Joe Biden has reached the two-week mark since becoming US president-elect, while President Donald Trump is stinging from back-to-back setbacks in his unprecedented bid to undo his election defeat.

Mr Biden, a Democrat, is preparing to take office on 20 January but Mr Trump, a Republican, refuses to concede and is seeking to invalidate or overturn the results through lawsuits and recounts in a number of states, claiming - without proof - widespread voter fraud.

That effort, which critics call an unparalleled push by a sitting president to subvert the will of voters, has had little success. 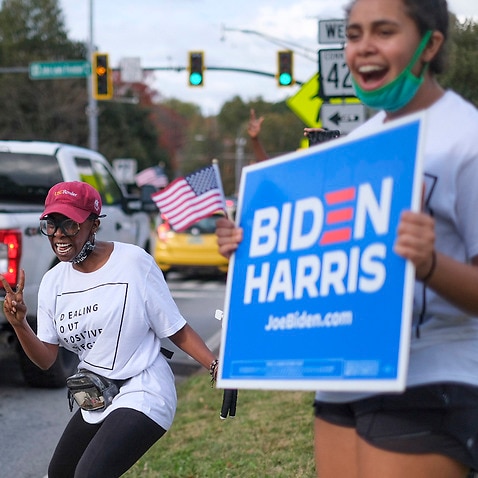 Mr Trump's campaign has suffered a string of legal defeats and appears to have failed to convince key fellow Republicans in states that he lost, such as Michigan, to buy into his unfounded conspiracy theories.

Mr Trump's bid to cling to power appeared more tenuous on Friday after Georgia Secretary of State Brad Raffensperger announced a manual recount and audit of all ballots cast had confirmed Biden as the winner there.

The final results certified by Mr Raffensperger had Mr Biden with 2.47 million votes, Mr Trump with 2.46 million and Libertarian Jo Jorgensen with 62,138. That leaves Mr Biden leading by a margin of 12,670 votes or 0.25 per cent.

"Working as an engineer throughout my life, I live by the motto that numbers don't lie," Mr Raffensperger said during a news conference at the state Capitol.

A pair of Michigan Republican leaders delivered another blow when they declared on Friday night after a White House meeting with Trump: "We have not yet been made aware of any information that would change the outcome of the election in Michigan."

Mr Trump, in his first public comments in days about the election, again asserted "I won" during a White House event on lowering drug prices earlier on Friday.

After legal defeats, the Trump team is resting its hopes on getting Republican-controlled legislatures in battleground states won by Mr Biden to set aside the results and declare Mr Trump the winner. It is a long-shot effort focusing on Michigan and Pennsylvania but even if those states flipped, Mr Trump would need to overturn the vote in another state to pass Mr Biden in the electoral college.

Mr Biden, who became President-elect on 7 November after his win in Pennsylvania prompted major television networks to call the election, was due to spend Saturday meeting Vice President-elect Kamala Harris and transition advisers.

Mr Trump will take part virtually this weekend in the last summit G20 summit of his term. When does Joe Biden become president and what happens to the US coronavirus fight until then?

Pressure for Mr Trump to start the formal transition process has mounted, with a few more Republicans voicing doubts over his unsubstantiated claims of fraudulent voting.

Susan Collins, the Maine senator, said for Mr Trump to contest election irregularities, "the right way is to compile the evidence and mount legal challenges in our courts". The General Services Administration, run by a Trump appointee, still has not recognised Mr Biden's victory, preventing his team gaining access to government office space and funding usually provided to an incoming administration.

Critics say Mr Trump's refusal to concede has serious implications for national security and the fight against the coronavirus, which has killed more than 250,000 Americans.

Shut off from government funds, Mr Biden's team has ramped up fundraising for the transition, turning to their vast mailing list of small donors, asking for contributions as small as $US25.