Tony Ayres is one of the most in-demand talents in Australian film and TV. But his success followed a childhood marked by chaos and tragedy.

Writer, producer and director Tony Ayres is behind some of the most interesting film and TV content coming out of Australia today.

But his own story rivals many of those he's currently telling on screen.

Speaking to SBS News, the 58-year-old recalls a "chaotic" childhood that seems both a distant memory and an intrinsic part of the man he became. A young Ayres and his mother.
Supplied

Ayres was born in 1961 in Macau, a Portuguese colony that has since been handed back to China.

He never knew his father, and when he was three, his mother married a sailor who was visiting from Australia. Before long, Ayres and his older sister were being taken to their new home in Perth.

But soon after arriving, Ayres' mother decided to leave her Australian husband. What followed was a "tumultuous" decade of moving around as she worked as a nightclub singer.

"We lived in housing commission flats and at one stage we lived in the storeroom of a Chinese restaurant, amongst the takeaway containers and coke bottles ... I think I went to 11 different primary schools," Ayres says.

"It was a very impoverished and pretty unstable life. My mother was trying to survive in the best way that she could, but that meant there was a string of different boyfriends and we had to move from place to place." A family portrait from the 1960s.
Supplied

"She tried to take her life quite a few times in my childhood, so I grew up in a very uncertain way. I never knew what was going to happen next," he says.

It threw his young life into even more uncertainty. Ayres was born in Macau but grew up in Australia.
Supplied

Ayres and his sister went to live with their stepfather - the sailor - and his new fiancée.

"He very kindly took me and my sister under his wing, even though he had been estranged from my mother for all that time."

But just as the siblings were starting to rebuild their lives, their stepfather unexpectedly died of a heart attack.

"We were orphans," he says.

With no one else to turn to, they were cared for first by their stepfather's fiancée and later by Ayres' history teacher.

An escape through storytelling

In these darker times, Ayres found an escape that would partly set his career in motion.

"Storytelling was always a way out of my fairly chaotic childhood," he says.

"I used to tell myself stories as a way of going to sleep at night. I used to create all sorts of fantasy worlds."

"I created things. Because the world was so out of control I thought that my one way of controlling it was through narrative. And weirdly so, that stuck with me."

Ayres graduated from high school and went on to study literature at the Australian National University in Canberra.

"I realised there was a way of shaping that therapeutic tool into something that was actually a narrative experience for other people." Ayres on the set of The Home Song Stories.
AAP

After university, he made a number of film and TV projects that were influenced by his own backstory.

It culminated with writing and directing the 2007 feature film The Home Song Stories, which was based on the early stages of his life and his mother's suicide.

The film played around the world and earned Ayres a swag of accolades, including two Australian Film Institute Awards.

During the interview, it becomes clear there is another part of Ayres' backstory that has deeply defined him.

While at university in 1979, Ayres met law student Michael McMahon, who would become his first boyfriend.

More than 40 years later, they are still together.

"I trust Michael more than I trust anyone," Ayres says. McMahon says Australian attitudes towards the gay community were drastically, and painfully, different when they met.

"Meeting Tony 40 years ago and starting a relationship as two gay men, it's almost inconceivable to imagine the difference to what our world is now," he says.

"In NSW, for example, our relationship involved committing a criminal offence for about four years after we met."

He says they have supported each other through a range of difficult times.

"Particularly the late 80s and early 90s, the really low point of HIV/AIDS and the way that decimated gay friends, family," he says. A still from the film The Home Song Stories.
AAP

McMahon began a legal career, before starting to work with Ayres in the late 1990s as a producer.

They appear to juggle their personal and professional lives with ease.

"So between us, we can make things."

Over the years, Ayres has stepped away from scripts and cameras to focus more on being a producer and showrunner.

Matchbox was behind the TV adaptation of Christos Tsiolkas' book The Slap, as well as Ali's Wedding and The Family Law. 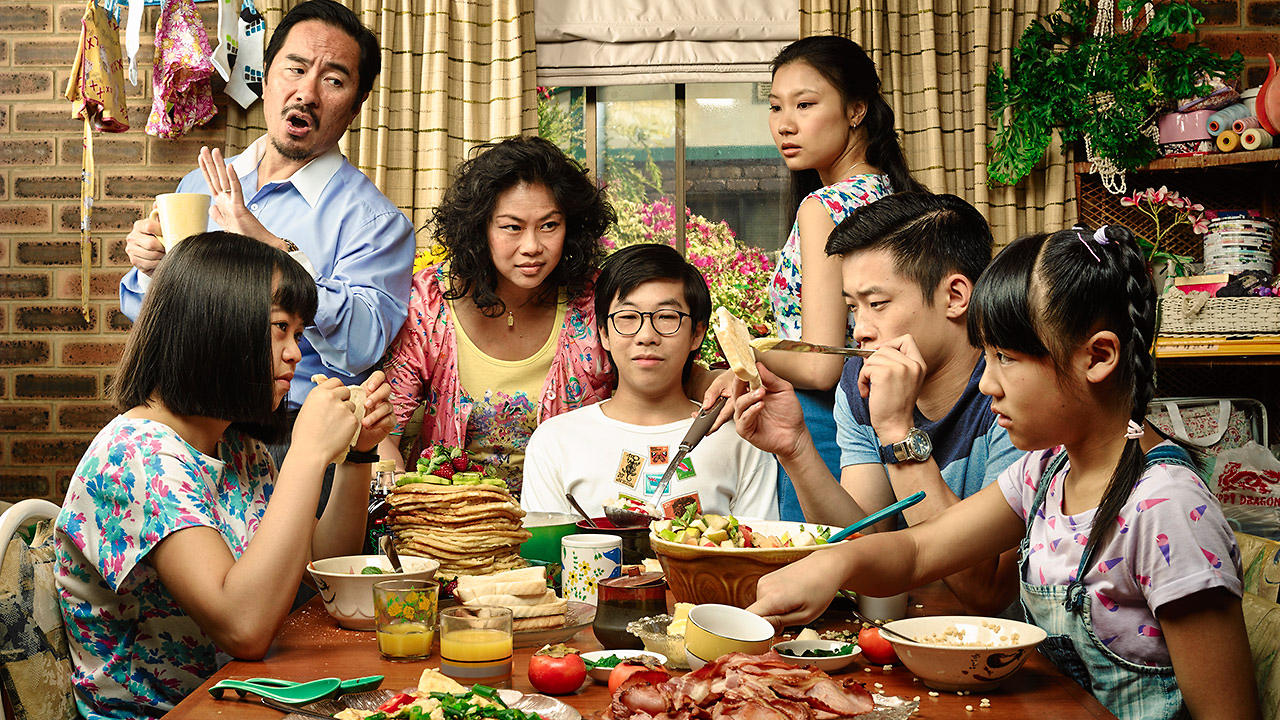 The Family Law was the first show on Australian television about an Asian-Australian family.
SBS

But, he insists, film and TV should not show diversity just for diversity's sake.

"What appeals to me is being able to tell stories that have the chance to connect to people from all walks of life, but being able to represent a whole range of people in the telling of that story," he says.

"[For example] The Family Law is the story of a relationship breaking up and the effect it has on the children, but it's just set in a world where everyone is Chinese."

Ayres has since risen to heights that many only dream of, and thanks to his gift for storytelling, is one of the busiest people in Australia's entertainment industry.

He is now co-creating a multi-million dollar series for Netflix called Clickbait, which is only the second Australian original drama series commissioned by the streaming giant.

The eight-episode thriller explores the ways "in which our most dangerous and uncontrolled impulses are fuelled in the age of social media, and reveals the ever-widening fractures we find between our virtual and real-life personas".

Not much more can be said beyond that as it's still in production. Ayres has also been making a TV series with Cate Blanchett called Stateless, about those caught up in Australia's immigration detention system.

On the topic, he rues how refugees are being used for "political purposes" by Australian MPs.

"What we're seeing in Australia at the moment is the use of the other, the enemy, as a way of prosecuting certain political agendas," he says.

"And I think that's a very dangerous thing."

Ayres plans to keep telling his stories, using the screen to change the hearts and minds of Australians in the years ahead.