In a lengthy statement, the former president has slammed the impeachment trial as a "witch hunt" and said he would have more to share with his supporters in the months ahead.

Former president Donald Trump has welcomed his second impeachment acquittal and says his political movement "has only just begun".

Mr Trump, in a lengthy statement, thanked his lawyers and his defenders in the House and Senate, who he said "stood proudly for the Constitution we all revere and for the sacred legal principles at the heart of our country".

He slammed the trial as "yet another phase of the greatest witch hunt in the history of our country". 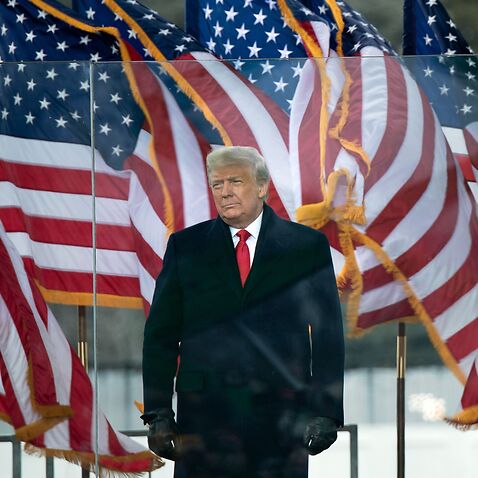 He told his supporters that "our historic, patriotic and beautiful movement to Make America Great Again has only just begun" and he would have more to share with them in the months ahead.

"Our historic, patriotic and beautiful movement to Make America Great Again has only just begun. In the months ahead I have much to share with you, and I look forward to continuing our incredible journey together to achieve American greatness for all of our people. There has never been anything like it!

"We have so much work ahead of us, and soon we will emerge with a vision for a bright, radiant and limitless American future. Together there is nothing we cannot accomplish.

"We remain one People, one family, and one glorious nation under God, and it's our responsibility to preserve this magnificent inheritance for our children and for generations of Americans to come.” While Mr Trump was acquitted by the Senate, seven Republicans voted to convict him, making it the most bipartisan vote in the history of presidential impeachments.

The Louisiana Republican Party has since condemned Mr Cassidy for his vote.

We condemn, in the strongest possible terms, the vote today by Sen. Cassidy to convict former President Trump. Fortunately, clearer heads prevailed and President Trump has been acquitted of the impeachment charge filed against him.

Meanwhile, Republican Senate Minority Leader Mitch McConnell, who voted to acquit Mr Trump, delivered a speech after the vote condemning the former president's conduct as a "disgraceful dereliction of duty".

"January 6 was a disgrace. American citizens attacked their own government," Mr McConnell said on the floor of the Senate.

He said the pro-Trump rioters had been “fed wild falsehoods by the most powerful man on earth” who was “angry he’d lost an election”.

"There's no question, none, that President Trump is practically and morally responsible for provoking the events of the day,” Mr McConnell said. “No question about it. The people who stormed this building believed they were acting on the wishes and instructions of their president.

"Having that belief was a foreseeable consequence of the growing crescendo of false statements, conspiracy theories and reckless hyperbole which the defeated president kept shouting into the largest megaphone on the planet.

"It was a manufactured atmosphere of looming catastrophe, the increasingly wild myths about a landslide election, some secret coup by our now-President.” Mitch McConnell, who voted to acquit Mr Trump, delivered a speech after the vote condemning the former president's conduct.
AAP

Mr McConnell went on to accuse Mr Trump of “not doing his job” during the riots, accusing him of “watching TV happily” as the demonstrations went on.

"A mob was assaulting the Capitol in his name. These criminals were carrying his banners, hanging his flags and screaming their loyalty to him. It was obvious that only President Trump could end this,” he said.

"Former aides publicly begged him to do so. Loyal allies frantically called. The president did not act swiftly. He did not do his job. He did not take steps so federal law could be executed and order restored. No. Instead, according to public reports, he watched TV happily as the chaos unfolded. He kept pressing his schemes to overturn the election.”

"Later, when the president finally started half-heartedly calling for peace, he didn't call right away for the riot to end. He did not tell the mob to depart until even later. And even then, with police bleeding, he kept repeating election lies and praising the criminals.”

Mr McConnell then, however, went on to justify his reason for voting to acquit, saying the Senate lacked the jurisdiction to punish the former president.