Men, women and children have come together to demand an end to violence against women in the wake of Melbourne's most recent senseless attack.

Hours after a 20-year-old man was arrested over the killing of international student Aiia Maasarwe, more than a thousand men, women and children formed a silent sea of bodies on the steps of Victoria's parliament to honour "the lives of women and children so brutally ended by male violence".

Many of the attendees carried red roses, Ms Maasarwe's favourite flower, and paid tribute to her father, Saeed Maasarwe, who looked emotional as he faced the crowd. Aiia Maasarwe's father Saeed Maasarwe speaks at a vigil for his daughter on the steps of Parliament House, Melbourne
AAP

"When I see people here like this, huge people, support us and give us good feeling about Australia and the community here in Australia we appreciate all of them one by one," he said.

"She was special girl. All the time she think positive, she happy. She can make everything even from the worst situation happy and joke. She is very friendly. She is really very, very happy."

As the vigil came to a close, attendees carried the tributes and flowers on to the 86 tram to Bundoora, the same line Ms Maasarwe caught before she was attacked.

On the 86 with community standing with Aiia Maasarwe and her family and loved ones, and against the brutal rape and murder of women. #AiiaMaasarwe pic.twitter.com/RTGboW4v1u

The striking tribute was organised by the same group of women who last year planned the vigil for 22-year-old comedian Eurydice Dixon.

"There was a real heaviness to the silence," one of the vigil's organisers, Megan Bridger-Darling, told SBS News.

"There was a lot of crying and seething anger bubbling under tears of sorrow." Jessamy Gleeson, another organiser, said she was "shattered and heartbroken" to be putting together another vigil just six months after the last one.

"There are a lot of things that need to change... and a lot of these changes can start with the government itself and the choices they choose to make," she said. People ride the 86 tram with flowers for Aiia Maasarwe.
AAP

"We want women to be safe and be able to walk home without being attacked."

Ms Maasarwe, a Palestinian Arab with Israeli citizenship, was on her way home from a comedy gig in North Melbourne when she was attacked shortly after midnight on Wednesday, after alighting a tram less than a kilometre from her home. A passerby found her body just metres from the Bundoora tram stop early on Wednesday morning.

Mr Maasarwe broke down as he spoke to reporters in Melbourne earlier on Friday.

Police have joined the Victorian community in mourning the death of Aiia Maasarwe at a public vigil this evening on the steps of Parliament House. pic.twitter.com/E3tU2AnOGe

"I have many dreams to be with her, but I cannot now," he said.

"I want to be with her more time, but someone decided that I cannot be."

Ms Maasarwe's uncle Abed Kittaneh told SBS Arabic24 that the news of her death came as a "bolt of lightning" for the family.

"It's very painful and very sad. You need God's mercy to bear such news,” he said. Aiia Maasarwe's father Saeed Maasarwe at the vigil for his daughter on the steps of Parliament House, Melbourne.
AAP

“Aiia was very bright since her early days, very active, smart, fun and forgiving. She had all the good qualities, she was fearless and she had the world ahead of her.”

Earlier today, La Trobe University - where Ms Maasarwe was studying as an international student - shut down as hundreds of students and teachers gathered to mourn her death. Vice-chancellor John Dewar addressed the emotional crowds, announcing that security for students would be ramped up.

"I am absolutely determined that the La Trobe community will do everything in our power to ensure that this never happens again," Professor Dewar said.

"Women must be able to feel safe, to walk in this city after dark and we will do everything we can to ensure that that happens, that is my promise to you." Tom Meagher, the husband of Jill Meagher who was murdered as she walked home from a pub in Brunswick in 2012, said that he was "sick to his stomach of men murdering women".

"The human cost of male violence is staggering, the incalculable social trauma and human misery it engenders is soul destroying. Its weight is intolerable."

After the vigil, Ms Bridger-Darling said she didn't know what needs to happen next to stop violence against women. 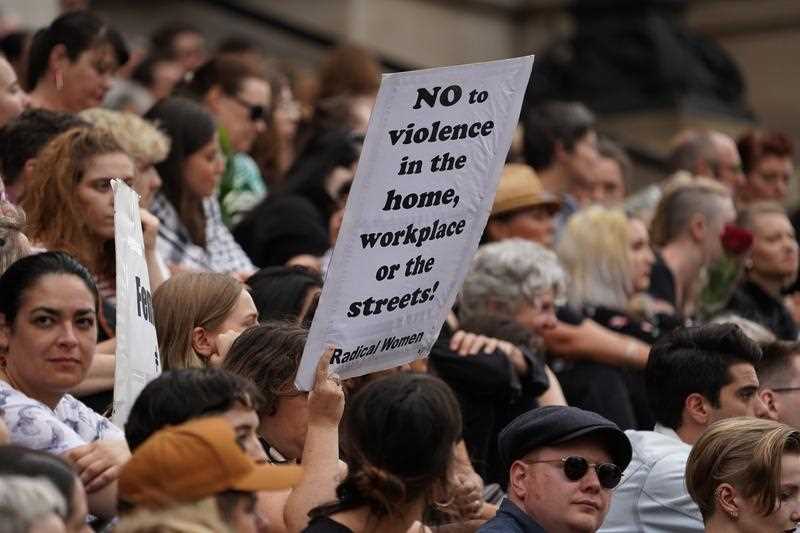 "There was a real heaviness to the silence," organiser Megan Bridger-Darling said.
AAP

"Today is about reflection and today is about Aiia and saying goodbye, not just to her but to all of the women who have been hurt."