The vessel, funded by Banksy, issued urgent calls for assistance, saying it was stranded in the Mediterranean and overloaded with migrants.

All of the migrants on board a rescue ship funded by British street artist Banksy have been transferred to other vessels, the team behind the mission said after their pink and white ship carrying more than 200 passengers sent an urgent call for help.

An Italian patrol vessel rushed to the stranded MV Louise Michel in the Mediterranean and took in 49 of the most vulnerable people on Saturday, the coastguard said.

The remaining migrants on board, around 150 people, were received by a vessel chartered by German NGO Sea Watch and medical charity Doctors Without Borders (MSF), according to tweets from both organisations and the Louise Michel's crew.

The #SeaWatch4 has completed the transshipment of about 150 people rescued in recent days by the #LouiseMichel.
We now have ~350 people on board who need to disembark in a safe port as soon as possible.#DefendSolidarity pic.twitter.com/ZIMGkwBlGi

"For those most recently embarked, medical assessment is ongoing, with the clinic full & #MSF medics treating people for fuel burns, dehydration, hypothermia & traumatic injuries," the MSF Sea Twitter account said of the situation on board the Sea-Watch 4.

🔴BREAKING! #SeaWatch4 has safely recovered ~150 vulnerable people from #MVLouiseMichel. As states delayed assistance to those in desperate need, @seawatch_intl & #MSF had no choice but respond. Despite still awaiting a place of safety for 201 survivors onboard. Now? Over to #EU. pic.twitter.com/GhDjbcW6Sk

The German-flagged Louise Michel had said it needed aid after helping a boat carrying at least one dead migrant in the sea that divides Africa and Europe.

Its crew said the 31-metre ship had become overcrowded and unable to move, warning that some of the migrants had fuel burns and had been at sea for days.

"Given the danger of the situation, the coastguard sent a patrol boat to Lampedusa which took in 49 people deemed the most fragile, including 32 women, 13 children and four men," said a coastguard statement. 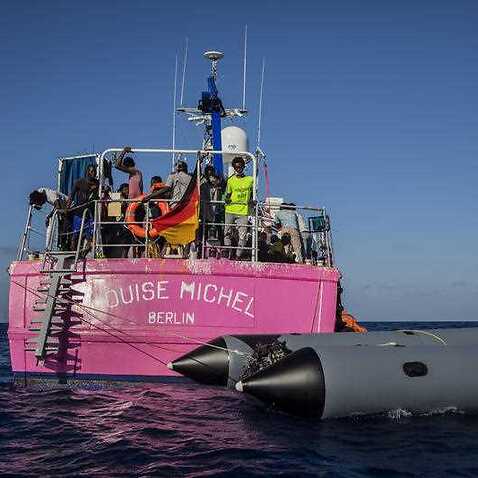 The rescued migrants later said three people had died at sea before the arrival of the Louise Michel.

Banksy, who keeps his identity a secret, explained in an online video that he had bought the boat to help migrants "because EU authorities deliberately ignore distress calls from non-Europeans". 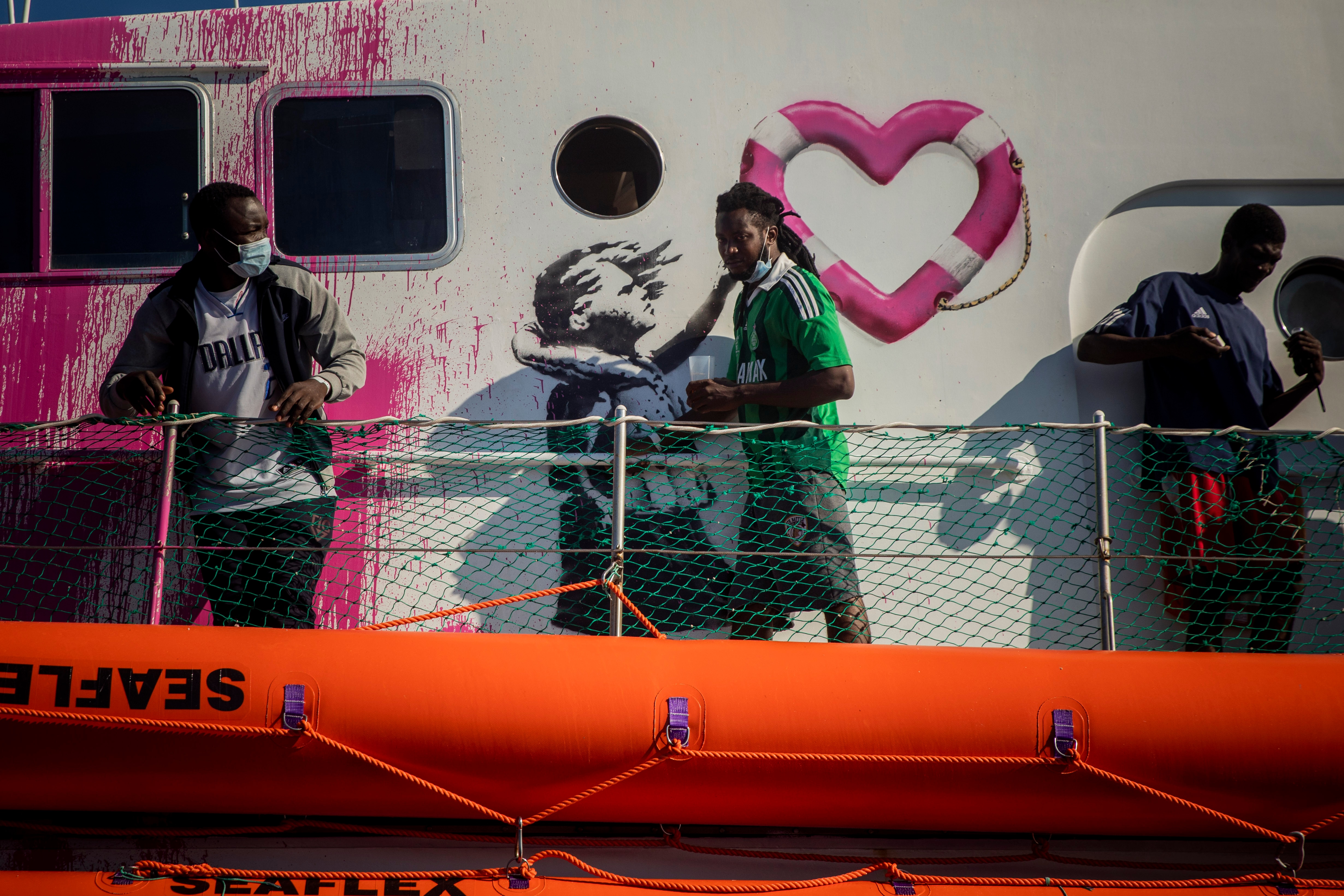 A man passes by a painting by British artist Banksy on the deck of the Louise Michele rescue vessel, after performing 2 rescue operations.
AP

Sea-Watch 4, which has a clinic on board and is itself in search of a host port, said it was now carrying 350 people after sailing for four hours to help the Louise Michel.

Its crew decided to take action "in the face of the lack of reaction" from the authorities, a Sea Watch spokesman told AFP.

The Louise Michel vessel's crew of 10 had already rescued 89 people from a rubber boat in distress on Thursday. They had tweeted that there were a total 219 people on board and that they had requested assistance from both the Italian and Maltese authorities.

The boat - a former French customs vessel named after 19th-century French anarchist Louise Michel - was around 90 kilometres southeast of Lampedusa on Saturday, according to the global ship tracking website Marine Traffic.

It features a Banksy artwork depicting a girl in a life vest holding a heart-shaped safety buoy.

~350 people rescued from the sea in less than one week. They are waiting onboard #SeaWatch4 to be assigned a Safe Place. #LouiseMichel no longer has guests onboard, but the struggle of the survivors is not over. #Europe! #SOLAS obliges you to rescue at sea. Open your ports now! https://t.co/uMBV5v3OA4

Its crew is "made up of European activists with long experience in search and rescue operations" and is captained by German human rights activist Pia Klemp, who has also captained other such rescue vessels, The Guardian newspaper reported.

Thousands of people are thought to have died making the dangerous trip across the Mediterranean to flee conflict, repression and poverty in Africa and the Middle East.

According to the UN refugee agency, UNHCR, attempts by migrant boats to cross the Mediterranean into Europe have increased this year, up 91 per cent from January to July over last year's figures, to 14,481 people.

Banksy's involvement in the rescue mission goes back to September 2019 when he sent Ms Klemp an email asking how he could contribute.

Ms Klemp, who initially thought it was a joke, told the paper she believed she was chosen because of her political stance, The Guardian said.

"I don't see sea rescue as a humanitarian action, but as part of an anti-fascist fight," she told the paper. This month, humanitarian organisations said they would resume migrant rescues in the Mediterranean Sea, where none have operated since the rescue ship Ocean Viking docked in Italy in early July.

Before the Ocean Viking's last mission, rescue operations in the Mediterranean had been suspended for months because of the coronavirus pandemic.

Meanwhile in the French port city of Marseille, 30 protesters called on Italian authorities to release the Ocean Viking, which was detained by the Italian coastguard over technical irregularities.