Outspoken right-wing commentator Milo Yiannopoulos has fired off an insult to Australia's first woman prime minister as he prepares for a speaking tour.

Right-wing provocateur Milo Yiannopoulos has branded former prime minister Julia Gillard "a prick" as he prepares to embark on his speaking tour of Australia.

The self-described "one man wrecking crew" and "internet supervillian" hurled the insult - along with plenty of others towards feminists and those on the left-wing of politics - during his first news conference on Australian shores on Wednesday.

After attacking several Australian journalists for cancelling interviews with him, he admitted he was a fan of former Liberal prime minister Tony Abbott but not of Australia's first female prime minister.

"I liked that guy Tony Abbott, I thought he was cool because he was ballsy ... he was up against Julia Gillard who seemed like a complete prick," Yiannopoulos told reporters.

Yiannopoulos added that his experience of Australia was more cultural than political, saying he was a fan of the satirical TV comedy Kath and Kim and "what's his name who does Dame Edna....Barry Humphries". 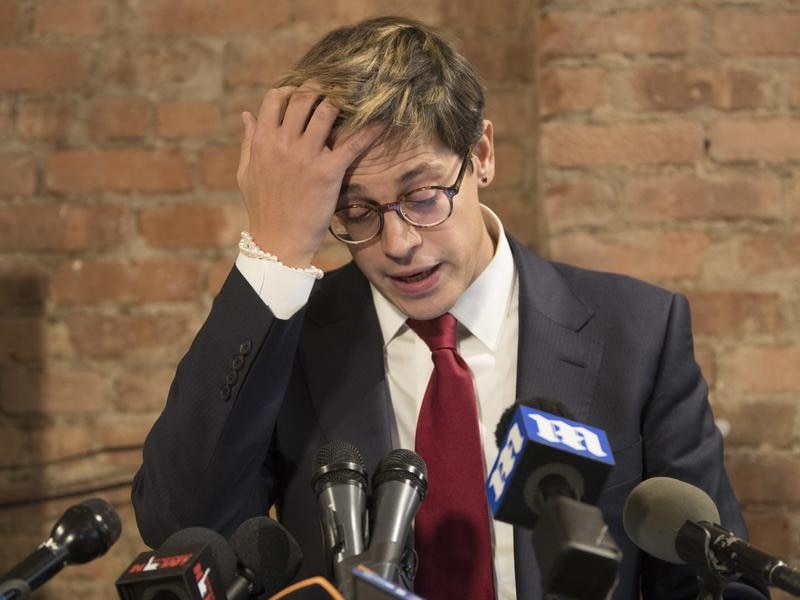 Alt-right figure Milo Yiannopoulos has been invited to Parliament House for a Q&A event. (AAP)
AAP

But he still weighed into plenty of political issues, calling on federal politicians debating same-sex marriage laws not to let them pass because there is no constitutional protection for freedom of religious expression and conscience like in the US.

"And I say that as a married gay person," he said.

He also praised Australia's immigration system, described section 18C of the Racial Discrimination Act as "the worst law", and urged conservative politicians to realise they "have the high moral ground" and should use it to highlight free speech.

Yiannopoulos has sold 10,000 tickets for his speaking tour of Sydney, Melbourne, Perth, the Gold Coast and Adelaide.

The venues are being kept secret until 24 hours before he appears for the two-hour shows, with Yiannopoulos claiming if he reveals the locations journalists will "invent" stories about protests.

One Sydney venue has already been switched, with organisers claiming it was because of security and access issues.

The Greens have urged the Senate president to stop Yiannopoulos addressing politicians at parliament house in Canberra next week given his controversial views on women, transgender people and Muslims, as well as his links to neo-Nazis.

Yiannopoulos said he was "flattered" by the attempt to have him banned from parliament, but accused the Greens of "casting out the right of free speech".

"I just try to describe the world as I see it...wrapped up in good jokes," he said.

His speeches on university campuses in the US have sparked violent protests, and he was banned from Twitter last year amid a barrage of racist abuse directed at Ghostbusters star Leslie Jones.

The British-born, US-based commentator also lost a book deal after a video emerged in February in which he appeared to suggest it was ok for older men to sleep with young teenage boys.

Yiannopoulos branded Twitter's decision cowardly, and initially said his comments about same-sex relationships between men and boys were taken out of context before eventually issuing an apology.