The hashtag #PrayForAmazonas continues to trend on social media, as images of a rainforest on fire spread across the internet. Here is what we know so far about the fires raging in the Amazon.

The number of fires identified by satellite images in the Amazon so far this month is the highest since 2010, according to Brazil’s National Institute of Space Research agency, which tracks deforestation and forest fires using satellite images.

So far this year, 40,341 fires have been recorded, which is about 35 per cent higher than the average for the first eight months of each year since 2010.

How did the fires start?

Natural fires in the Amazon are rare, and the majority of these fires were set by farmers preparing Amazon-adjacent farmland for next year’s crops and pasture.

Much of the land that is burning was not old-growth rainforest, but land that had already been cleared of trees and set for agricultural use. How unusual are the fires?

INPE’s figures represent a 79% increase in fires from the same period in 2018. There have been large numbers of fires in other recent years as well: According to a manager of Global Forest Watch, the number of fires in the Amazon this year is roughly comparable to 2016.

Deforestation more broadly is always a cause for concern. Last year, the world lost about 30 million acres of tree cover, including 8.9 million acres of primary rainforest, an area the size of Belgium, according to data from the University of Maryland. The destruction of the Amazon rainforest in Brazil has increased rapidly since the nation’s new far-right president took over and his government scaled back efforts to fight illegal logging, ranching and mining.

While campaigning for president last year, Bolsonaro declared that Brazil’s vast protected lands were an obstacle to economic growth and promised to open them up to commercial exploitation.

Less than a year into his term, that is already happening. Brazil’s part of the Amazon lost more than 1,330 square miles of forest cover in the first half of 2019, a 39% increase over the same period last year, according to the government agency that tracks deforestation.

The Amazon is often referred to as the Earth’s “lungs,” because its vast forests release oxygen and store carbon dioxide, a heat-trapping gas that is a major cause of global warming. If enough rainforest is lost and can’t be restored, the area will become savanna, which doesn’t store as much carbon and would mean a reduction in the planet’s “lung capacity.”

Is climate change to blame?

These fires were not caused by climate change. They were, by and large, set by humans. However, climate change can make fires worse. Fires can burn hotter and spread more quickly under warmer and drier conditions. 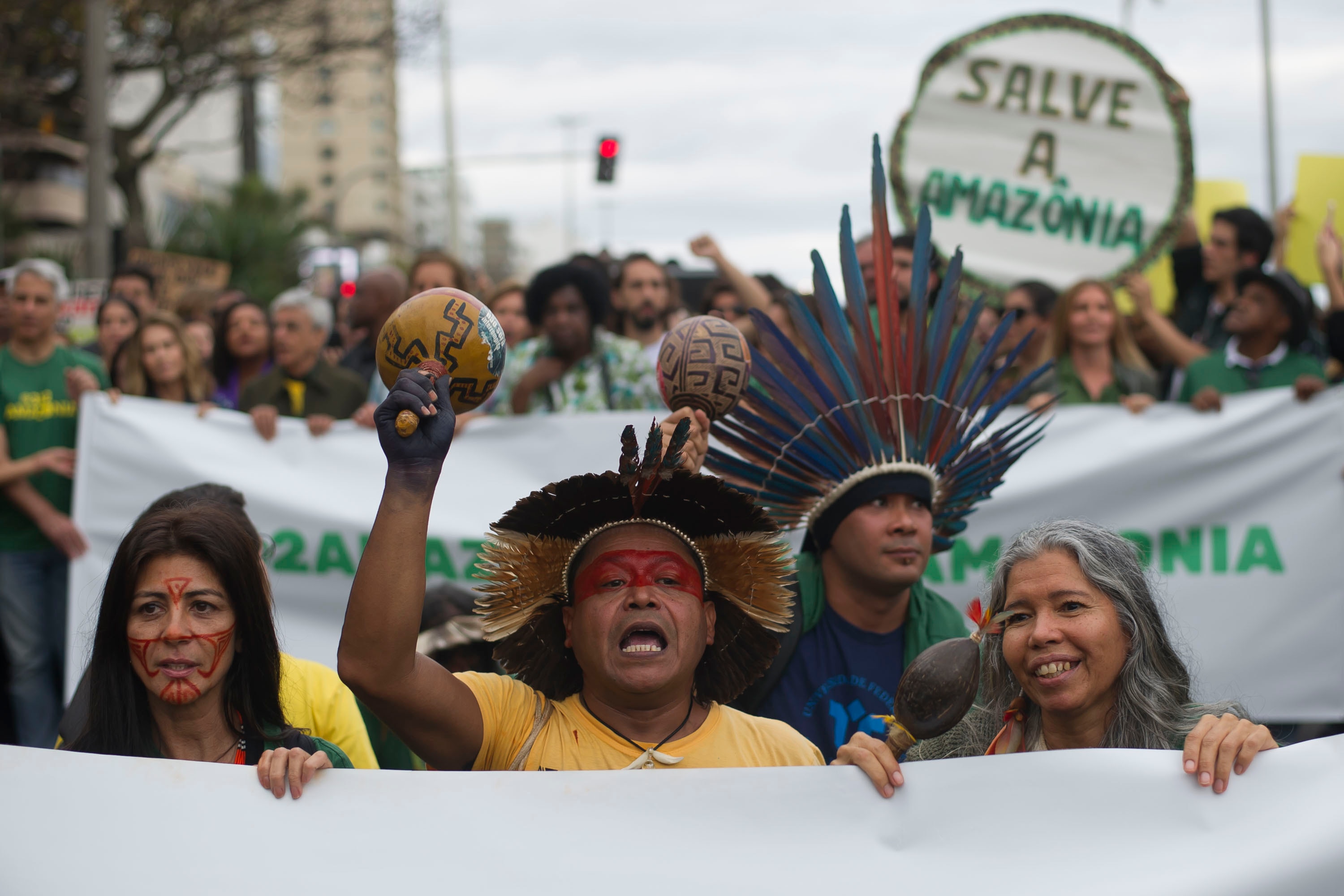 Indigenous people protest in defense of the Amazon while wildfires burn in the region.
AAP

When it comes to the future of climate change, widespread fires contribute a dual negative effect. Trees are valuable because they can store carbon dioxide, and that storage capacity is lost when trees burn. Burning trees also pumps more carbon into the atmosphere.

How does deforestation work?

Deforestation can be caused by natural factors, like insects or blight, or by humans. This is a typical case of human deforestation: Farmers cut down trees to plant or expand a farm, then burn the leavings to clear the ground.

Brazil had previously tried to portray itself as a leader in protecting the Amazon and fighting global warming. Between 2004 and 2012, the country created new conservation areas, increased monitoring and took away government credits from rural producers who were caught razing protected areas. Trees destroyed by fire in the Amazon.
AAP

This brought deforestation to the lowest level since record-keeping began.

But as the economy plunged into a recession in 2014, the country became more reliant on the agricultural commodities it produces — beef and soy, which are drivers of deforestation — and on the powerful rural lobby. Land clearing, much of it illegal, began to tick upward again.

Are the fires the fault of President Jair Bolsonaro?

There is evidence that farmers feel more emboldened to burn land following the election of Bolsonaro.

A New York Times analysis of public records found that enforcement actions intended to discourage illegal deforestation, such as fines or seizure of equipment, by Brazil’s main environmental agency fell by 20% during the first six months of this year.

Bolsonaro blames nongovernmental organisations for the fires. He has cited no evidence, and environmental experts dispute the claim. Calls to preserve Australia's rainforests as fires rage in the Amazon

What is Brazil’s government doing to fight the fires?

Some local governments have said they are shoring up their fire brigades.

The federal government has not offered any major organised effort to fight the fires.

Last week, Bolsonaro said the Brazilian government lacks the resources to fight the fires, but he has since said he will direct the military to enforce environmental laws and to help contain the fires.