Amber Wright will make her professional boxing debut this weekend and hopes to one day make history for Indigenous women in the sport. But the palawa woman is also hoping the limelight will help her to solve a family mystery.

Aboriginal and Torres Strait Islander readers are advised that this article may contain images of people who have died.

Amber Wright is known for her gentle demeanour, but you wouldn’t want to go up against her in a fight.

"When she gets in the ring, she just turns into an animal," her coach Nathan Swadling says.

“That place is probably the closest thing where I feel like me, like my true self," she tells SBS News.

“I think that's why I love it so much and I revolve my whole life around it.” 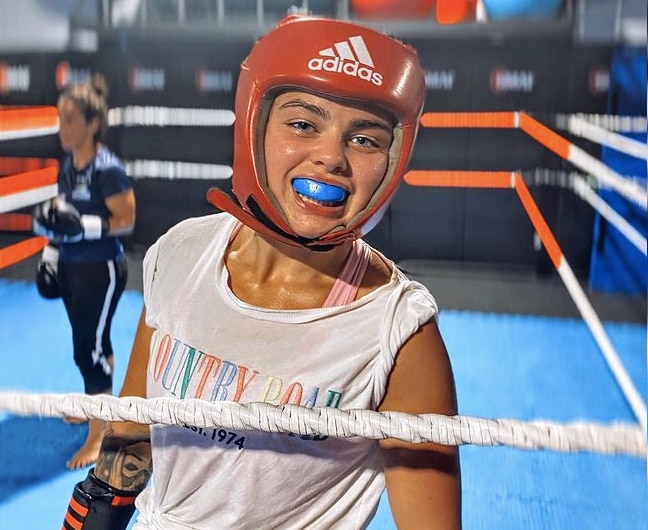 Amber Wright in the ring.
Instagram/amberr.wrightt

When Amber was younger, it was normal for her father, David Stevens Brown, to visit now and again. She was raised by her mother and stepfather.

But something was strange about the last time she saw him, in October 2001, when she was only five.

The then 33-year-old left nothing behind but a watch and a few pieces of paper at his house in Lake Haven on the New South Wales Central Coast. Amber later discovered it was his will.

Despite the efforts of detectives and his family, David disappeared without a trace. Amber with her father David Brown.
Supplied by Amber Wright

“When I was 16, it got taken to the coroner’s court and he was declared as deceased," Amber, who now lives in Belmont, New South Wales, says.

Amber believes he is still alive. For the past three years, boxing has consumed her life. After countless hours spent perfecting her techniques with her coach, her talent became hard to ignore, Nathan says. Amber is about to go professional.

Nathan struggled to convince Australian Boxing Management’s Rob Fogarty that Amber had what it takes when he approached him to sign her 16 months ago.

"She had an amateur style which Nathan said he could change to a pro style, and at the time I didn't pay much attention to it,” Rob says.

Amber went on to compete in a range of amateur fights, winning four state titles. She also became Australia's 2019 Women’s Welterweight Champion with fewer than fifteen fights under her belt.

“One of the girls she jumped in and beat had done 46 fights; that's five or six years in the industry, constantly competing,” Nathan says.

With no one left in her league to fight, Amber has spent more than a year in intensive training to prepare for her professional debut on Saturday 27 February in Cessnock.

"I haven't yet come across an Indigenous female boxer so it'd be great to be the first successful one,” Amber says.

A change of heart made Rob sign Amber in January and now he says he’s never had more faith in a female boxer in his 25 years working in the industry. “You know, I believe that she can become the first Indigenous female world champion,” he says.

It’s something Nathan believes is inevitable. “I don’t see it going any other way,” he says.

A long line of Indigenous men have made their mark in the world of boxing.

If she makes it, Amber says she hopes it will one day provide an opportunity to discover what happened to her father.

"If my name got out there and it was there for a lot of people to see, maybe he might see it and find me or something."

If you know more about this story, email nadine.silva@sbs.com.au