The German Chancellor stumbled as she took to the stage to deliver a speech in Berlin.

German Chancellor Angela Merkel stumbled on her way to the stage to address an audience of industry and commerce representatives on Wednesday.

The German Chancellor quickly regained her balance, joking that she would use the stairs the next time.

"I didn't see the steps, the next time, I will use them. I will take them on the way down," she told the audience.

Ms Merkel went on to deliver her speech at the Berlin conference on trade multilateralism and digital security.

Questions were raised about the 65-year-old leader's health earlier in the year when she was caught on camera trembling three times in less than a month. German Chancellor Angela Merkel grips her arms during her second bout of the shakes in public.
AAP

Ms Merkel insisted she was "very well" in July after she was seen shaking involuntarily at an official reception for Finnish Prime Minister Antti Rinne.

The first bout of shaking in June was blamed on dehydration, but a second episode struck a week later at the end of June, just hours efore she was due to board a plane for the G20 summit in Japan. 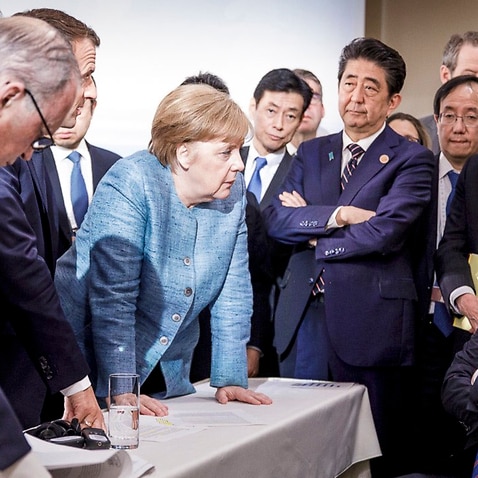 Officials have played down fears over her health and Ms Merkel has continued to keep up a packed schedule without cancelling any planned engagements.

She plans to leave politics at the end of her term in 2021.