Mr Newman was due to tour Australia, speaking against proposed legislation in Victoria and NSW to protect women seeking abortions and to decriminalise the practice. 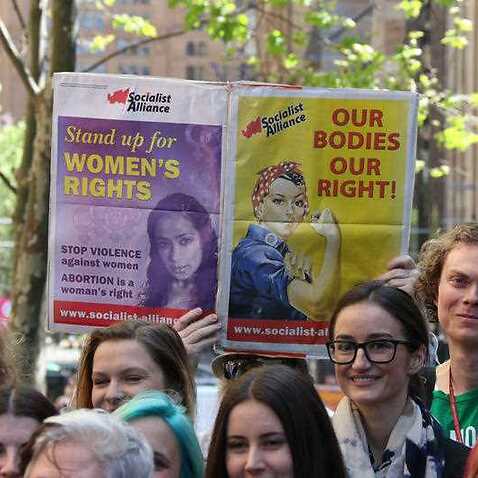 “I can confirm that my department has cancelled the visa for Mr Troy Newman under Section 128 of the Migration Act,” the minister said in a statement.

“Mr Newman can appeal for a revocation of this decision and no further comment will be made during this appeal period,” he added.

"Please pray for me. I'm stuck in Denver airport like a man without a country."

On his Facebook page Mr Newman said his visa was revoked "mid-flight".

"I was pulled off a plane in Denver and told I could not travel to Los Angeles. And then onto Melbourne Australia," he wrote:

"Please pray for me. I'm stuck in Denver airport like a man without a country."

This video of the moment Mr Newman was told he was not allowed to travel to Australia was posted on YouTube today.

Labor MP Terri Butler released a statement saying she was pleased the government had heeded her concerns.

"Anyone who advocates the execution of doctors or compares women who seek terminations to murderers clearly fails the Australian community's characer test," she said.

She had previously written to Mr Dutton calling for Mr Newman's visa to be cancelled.

"I am very concerned that his presence in Australia will incite some to harass and intimidate women accessing reproductive services and those professionals offering them at medical clinics," she wrote.

Greens MP Mehreen Farqui, who is pushing to decriminalise abortion in NSW, also welcomed the news.

A change.org petition to stop Mr Newman from entering the country attracted more than 2500 signatures.

Mr Newman was due to speak in Melbourne, Sydney, Hobart, Brisbane and Cairns at the invitation of Right to Life Australia.

Here is the full itinerary for Troy Newman's tour. Troy is the President of Operation Rescue and a board member of The...

Posted by Right to Life Australia on Wednesday, September 23, 2015