Hundreds of Adani coal mine supporters have rallied in a Queensland mining town to protest against a convoy opposed to the project.

A Bob Brown-led convoy to stop Adani's Bowen Basin mine has been greeted by hundreds of counter-protesters as it rolled into the coal-rich Queensland region.

The convoy of about 400 mine opponents reached the mining town of Clermont on Saturday afternoon after politicians Matt Canavan, Clive Palmer, Pauline Hanson and Malcolm Roberts arrived earlier to support the coal industry.

Police in Clermont redirected the convoy so it wouldn’t go down the main street but locals followed, determined to have their say. “Go home” was the message. @SBSNews pic.twitter.com/3FuHTKqdio

Locals in Clermont say anti-Adani protesters are coming to the wrong town. Bob Brown’s convoy is a few hours away @SBSNews pic.twitter.com/9jCf1NLOpL

Residents lined the main street and jeered as the convoy, comprising around 200 cars, arrived.

Mr Brown, the former Australian Greens leader, has urged coal advocates to "use your God-given intelligence" to stop the "worsening climate emergency due to the burning of fossil fuels".

"It's a complete fabrication that people in central Queensland aren't worried about this mine," he told AAP ahead of his arrival.

"We should all be committed to putting the aggression to one side and talking about the issues, the key issue being the future of our children."

Local publican Kel Applegate organised the rally in support of the Adani project, saying visitors would also struggle to find a beer after Clermont's three pubs agreed not to serve them.

"It's nothing personal but (the anti-Adani activists) are hypocrites," Mr Applegate told AAP. 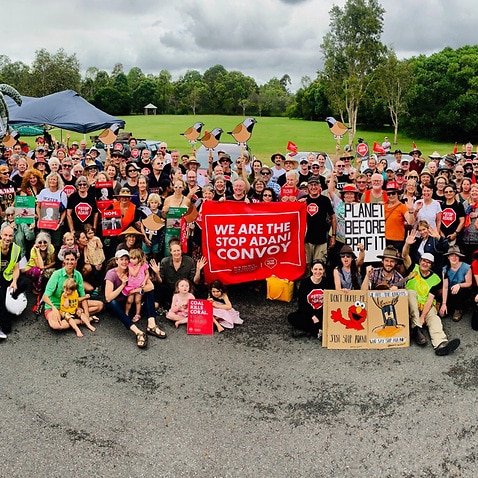 "How do they think steel gets made, or their electric trains run? It doesn't come from solar panels or wind farms."

Mr Brown said his "law-abiding and peaceful" convoy would be confronted by a "gaggle" of right-wing politicians as part of the "festival of democracy", but his message would otherwise be welcomed.

"I was braced for a hostile reception in Mackay and it turned out it was mega- friendly," he said.

He reiterated a claim a disabled member of his convoy had been "punched" in a display of "alcohol-infused thuggery by some pro-Adani people."

State shadow mining minister Dale Last, also in Clermont, said residents were "very angry that this group's coming out here to tell them what they should and shouldn't be doing."

"I think these protesters will be left in no doubt they've walked into a hornet's nest in this country," he said.

"They're going to get a very, very hostile reception, I can assure you of that."