It comes amid controversial comments made about Islam by French President Emmanuel Macron.

Muslims in South Asia vented their fury at France on Friday and torched an effigy of President Emmanuel Macron over his recent remarks on Islam, with tens of thousands flooding the streets.

Smaller anti-France protests also took place in the Middle East after Mr Macron's defence of the right to publish controversial cartoons of the Prophet Mohammed - a position that has sparked anger across the Muslim world.

France has been on edge since the beheading this month of a teacher in a Paris suburb for showing pupils the cartoons, repeatedly published by satirical magazine Charlie Hebdo, in a class on free speech.

On Thursday a 21-year-old Tunisian suspected jihadist brutally killed three people at a church in the southern French city of Nice, further raising tensions across France.

Huge crowds took to the streets of Dhaka to condemn the French leader after Friday prayers - the Bangladeshi capital's second anti-France protest in five days. 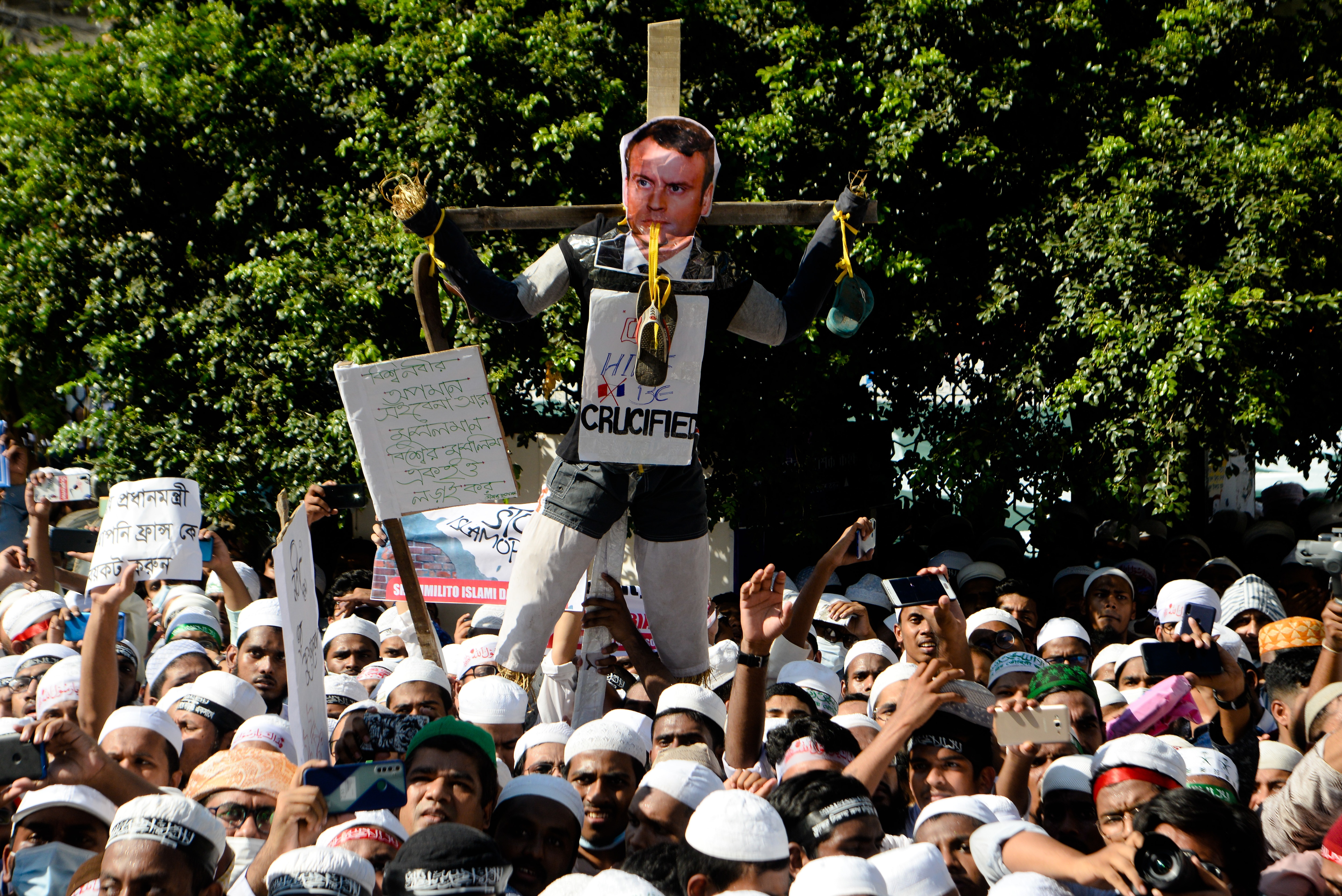 "We are all soldiers of Prophet Mohammed," the crowd chanted as demonstrators called for a boycott of French goods and some burned an effigy of Mr Macron.

Police said 12,000 people took part in the rally, though independent observers and organisers claimed more than 40,000 marched in Dhaka. Smaller crowds gathered outside hundreds of mosques elsewhere in the capital and around the country.

"France is insulting the world's two billion Muslims. President Macron must apologise for his crimes," said Gazi Ataur Rahman, a senior leader of Islami Andolan Bangladesh, one of the political parties that called the protests.

Around 10,000 people marched through Karachi, Pakistan's biggest city, after Friday prayers in what was organised as a procession to mark the Prophet's birthday, but which was charged with anti-France anger.

Another rally in Pakistan's capital grew rowdy, with stones thrown at police and tear gas fired to control the crowds. Around 2,000 protesters in Islamabad marched towards the French embassy, pushing aside shipping containers that had been placed to block their path.

The crowd shouted "expel the French dog" and "behead the blasphemous" but were prevented from reaching the embassy by further guarded barricades.

"How dare they disrespect our prophet? As a Muslim I am ready to sacrifice my head for the Prophet's honour," said Rasheed Akbar, 34, a trader who joined the crowd.

Small protests were also held in Afghanistan, with thousands in the western city of Herat shouting "Death to France! Death to Macron!".

In the Lebanese capital Beirut, around 200 people protested against Mr Macron at a rally organised by an Islamic group, and some young men clashed with police.

"France is in crisis because of Macron," read a sign held up by a protester. Another said "Islam is dear" to us. 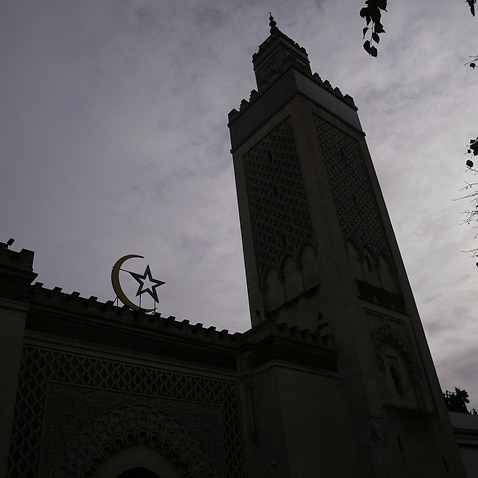 Thousands of Palestinians rallied in Jerusalem's Old City after Friday prayers at Al-Aqsa Mosque, Islam's third holiest site, chanting "there is no God but God, Macron is the enemy of God".

Al-Aqsa prayer leader Sheikh Ekrima Sabri said during his sermon that Mr Macron should be held accountable "for the acts of violence and chaos in France because of his provocative statements against Islam".

"We tell the enemies of Islam... the light of Allah will cover up your words," Sheikh Sabri added.

Hundreds of Palestinians also demonstrated across the Israeli-occupied West Bank and in the blockaded Gaza Strip, with portraits of Mr Macron torched and trampled, AFP journalists reported. 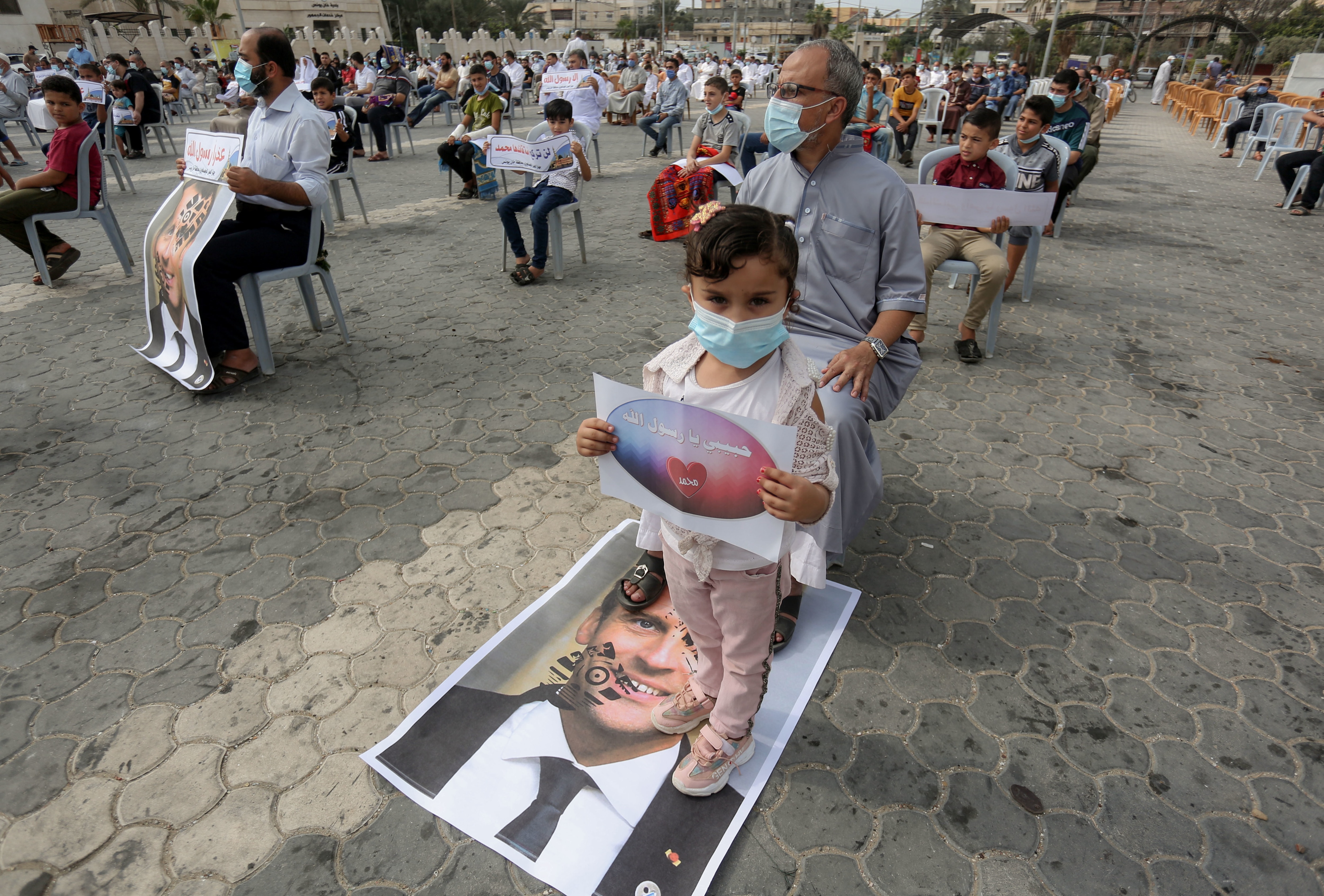 In the Libyan capital Tripoli, protesters trampled the French flag as Libyan television stations broadcasted live rallies from across the North African country and talk shows with Muslim clerics condemned "attacks against the Prophet".

Pakistani Prime Minister Imran Khan has accused the French president of attacking the Muslim faith and urged Muslim countries to work together to counter what he called growing Islamophobia in Europe.

Iran's supreme leader Ayatollah Ali Khamenei called Mr Macron's defence of cartoons depicting the Prophet a "stupid act" and an "insult" to those who voted for him.

In India, where the Hindu nationalist government has strongly backed Mr Macron, leaders of the country's minority Muslim community have called for a boycott of French goods.