Three people were arrested and dozens fined during anti-vaccination rallies, which have now diminished in size. 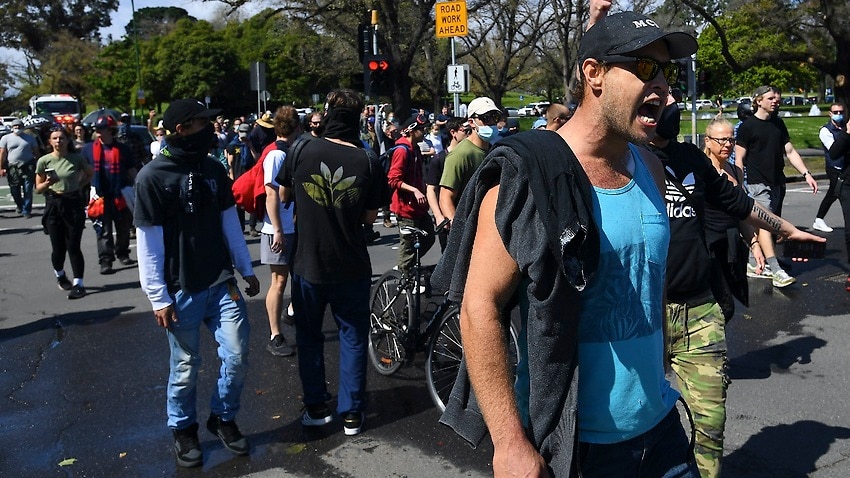 Three people have been arrested and dozens fined after small numbers of protesters held anti-vaccination rallies in Melbourne.

Protests were organised by anti-lockdown and anti-vaccination groups in parts of the Victorian capital city on Saturday, including at Campbellfield Plaza and in Glen Waverley.

"Victoria Police will continue to have a highly visible presence to maintain public safety, and to ensure any protest activity that breaches the CHO directions does not impact on the broader community's right to go about their daily lives," a police spokeswoman said.

Victorian Police officers speak to protesters at a rally near Campbellfield Plaza in Melbourne. Source: AAP

She said secondary contacts would no longer be "actively managed" by public health teams, and 16,000 people across the state would receive a text message releasing them from quarantine.

"We are no longer chasing COVID-zero in Victoria, and we have 17,000 active cases in Victoria."

Secondary contacts are still encouraged to get tested for COVID-19 if they show any symptoms.

Meanwhile, a Virgin Australia flight attendant has tested positive after routine surveillance testing by the airline.

The crew member worked on six flights while infectious from October 4 to 6, including return trips from Melbourne to Adelaide, Sydney and Newcastle.

Passengers on affected flights to be contacted by their state health bodies.

"Fellow crew members on those flights have been deemed close contacts. Most do live in Melbourne and will be contacted by the department," Ms Matson said.

A virus outbreak in Mildura has grown to 37 active infections after the regional border town was plunged into a seven-day lockdown on Friday night.

Ms Matson said the next seven days would be crucial for the region.

Mildura will be under the same stay-at-home rules as Melbourne, excluding the curfew, with a 15-kilometre travel limit and a ban on visitors at people's homes.

Health authorities say 41,177 vaccine doses were administered across the state on Friday, as well as 73,000 virus tests.

Eighty-five per cent of Victorians aged over 16 have now received one dose of a COVID-19 vaccine, with 57 per cent fully vaccinated.