There are fears a COVID-19 outbreak at Sydney's Villawood detention centre could intensify as refugee advocates question why detainees remain in such a high-risk environment. 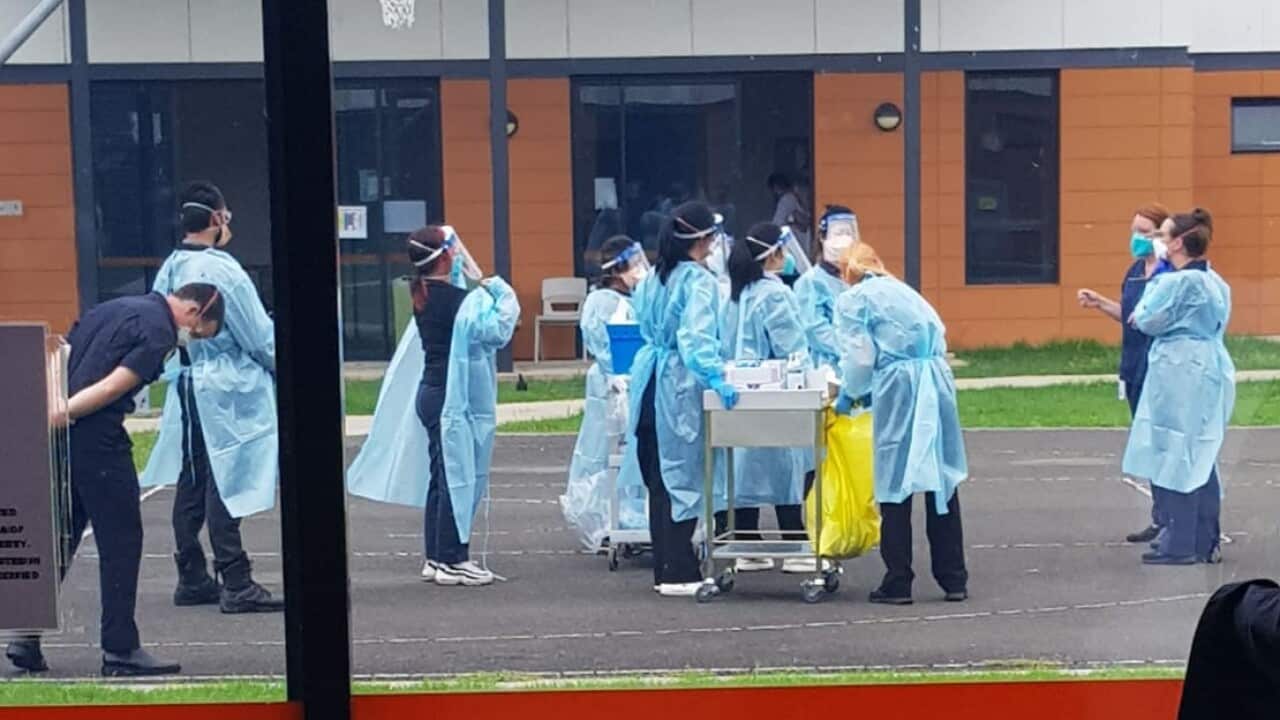 There are fears for a COVID-19 outbreak at Villawood Immigration Detention Centre. Source: Supplied/SBS News

Six people have tested positive to COVID-19 at Sydney's Villawood Immigration Detention Centre, with refugee advocates angry that the facility is ill-prepared for an outbreak.

All staff and detainees at the centre are currently being tested for coronavirus, with authorities expecting the caseload to rise.

Spokesperson for the Refugee Action Coalition, Ian Rintoul, has described the current situation at Villawood as "a disaster waiting to happen".

Advertisement
He says some medically vulnerable detainees remain in the high-risk detention environment despite calls from the Australian Human Right Commission (AHRC) to release them. He also talked about "failures" in the centre's safety protocols that place detainees at risk.

Hundreds of security guards and other workers enter and interact with detainees at detention centres daily.

"Like other detention centres, Villawood has been a disaster waiting to happen," Mr Rintoul said in a statement. "Despite previous COVID scares at Villawood the government has done nothing to safeguard the health and welfare of detainees. Vulnerable detainees should have been released long ago.

"Government inaction and COVID protocol failures means that all of the 450 Villawood detainees are at high risk of infection. The staff shortages magnify the risk that the Villawood outbreak cannot be safely managed.

"Anyone at high risk inside Villawood must be immediately removed from the centre. Many detainees have families that they could safely stay with."

In April 2020, Australia's Human Rights Commissioner called for the "urgent" and "immediate" release of immigration detainees
into community detention where it is safe to do so.

"The Australasian Society for Infectious Diseases has said people in detention who don't pose a significant security risk be released into the community immediately," then-Commissioner Edward Santow told SBS News at the time.

The calls were made in line with recommendations by peak medical bodies advising the federal government response to COVID-19.

At the time,
detainees at Sydney's Villawood detention centre staged a rooftop protest
to highlight their concerns.

Throughout the pandemic, Australian medical specialist groups, lawyers and human rights organisations have also warned about the threat immigration detention and 'alternative places of detention' such as hotels poses as coronavirus infection hotspots.

In October, an COVID-19 outbreak swept through asylum seekers at Melbourne's Park Hotel, infecting almost half of detainees.

Refugees and asylum seekers have also staged protests at the repurposed Kangaroo Point Central Hotel in inner-city Brisbane and the Mantra hotel in the Melbourne suburb of Preston, calling for their release.

The AHRC regularly inspects and advises the federal government on detention facilities, alongside the Commonwealth Ombudsman, who has oversight under the UN Optional Protocol to the Convention against Torture treaty signed by Australia in 2017.

An Australian Border Force (ABF) spokesperson confirmed to SBS News on Tuesday that six detainees had tested positive for COVID-19.

"Standard departmental protocols are being followed in relation to a positive diagnosis including contact tracing, quarantining, testing and cleaning, in conjunction with the New South Wales public health unit," the spokesperson said.

They said as at 9 January, 59 per cent of detainees across the immigration detention network were fully vaccinated against COVID-19, and three per cent were partially vaccinated.

They said the ABF had implemented "a range of" infection prevention measures at immigration detention facilities that were in accordance "with the Communicable Diseases Network Australia National Guidelines for the Prevention, Control and Public Health Management of COVID-19 Outbreaks in Correction and Detention Facilities in Australia", and current public health advice.

The spokesperson said detainees have access to medical professionals located within immigration detention facilities, and asserted that health care services provided within them were "broadly commensurate" with those "available to the Australian community through the public health system."