The looming ban on single-use plastic bags being introduced by Coles and Woolworths isn't being welcomed by 20 per cent of shoppers, a survey shows. 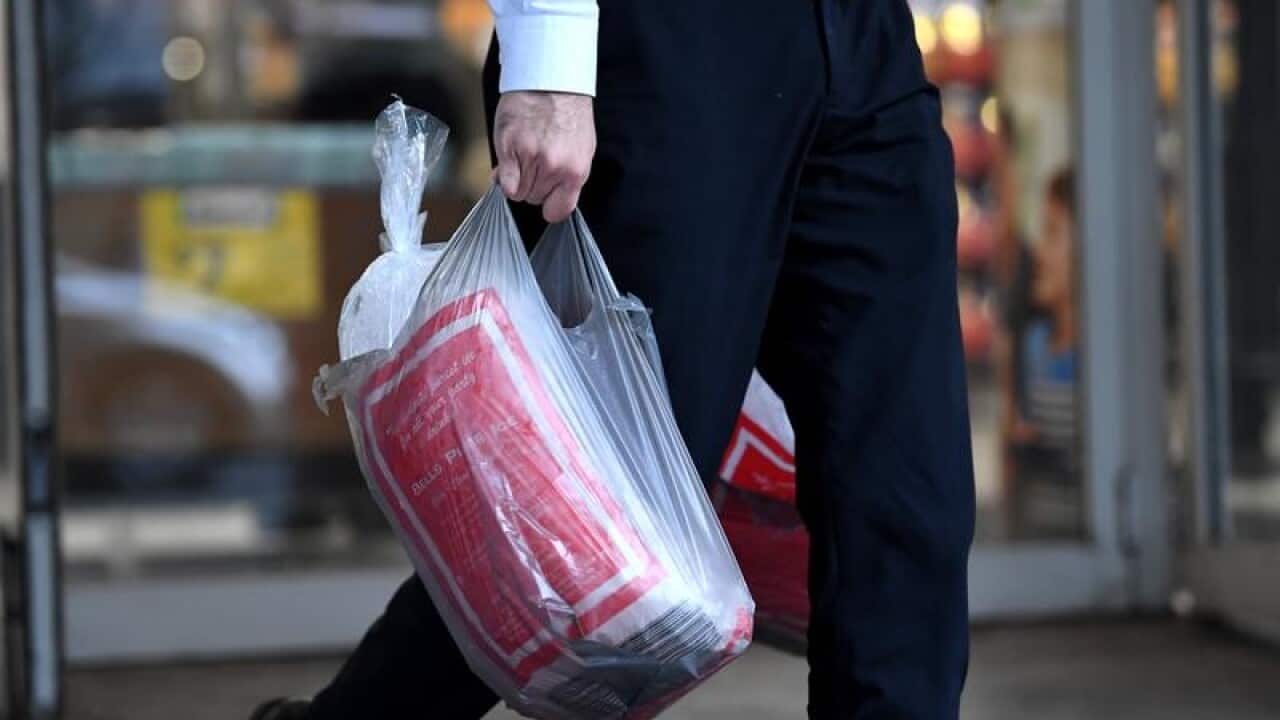 While plastic bag bans have been welcomed by many shoppers, 20 per cent don't agree. (AAP)

One in five Aussie shoppers are opposed to retail giants Woolworths and Coles introducing bans on single-use plastic bags.

While the bans have been welcomed by green groups and many shoppers, research by Canstar Blue shows 20 per cent don't agree.

Canstar says more than half of shoppers have already begun stockpiling plastic bags at home, based on a survey of more than 2200 people.

While 71 per cent of those surveyed back the ban, 21 per cent disagree and eight per cent are undecided.

Nearly half expect that taking their own bags to the shops would be a hassle.

"While the plastic bag ban is supported by most, the supermarkets can expect some frustrated customers in the weeks ahead," Canstar Blue Editor Simon Downes said on Monday.

"While Coles and Woolworths have been trying to get the message across, there will still be lots of shoppers turning up unprepared and shocked that they'll need to purchase one or more bags to carry their groceries home."

Some Woolworths shoppers have threatened to boycott the retailer after it revealed plans to charge its online pickup and delivery customers $1.00 for the reusable plastic bags their goods will be packed in.

Home delivery customers opting for a new "crate to bench service" will have to fork out $3.50 per order.

Many angry shoppers have taken to the Woolworths Facebook page to criticise the charges.

Stephanie Davey wrote that while she supports the removal of single-use plastic bags, the new extra charges were "completely unreasonable" given she already pays an annual delivery fee.

"I do now need to accumulate heavy duty bags every delivery, and do not want to pay $3.50 to remove my groceries from the crate. I will happily do this myself! Disappointed customer, looking to the opposition who are not charging an additional fee," she wrote.

"It takes a bit of getting used to and remembering to pop your re-usable bag into your handbag or backpack to make sure you have one on hand," she said.

"But we do think people understand the pervasiveness of plastic and that it takes hundreds of years to break down in the environment."

Bans on single-use plastic bags in several European countries since 2003 has led to a 30 per cent drop in plastic bags found in waters off the continent, according to a study published in the journal Science of the Total Environment in April.