The federal government's appeal of a "landmark" legal ruling that secured the release of a Syrian refugee could have broader implications for Australia's immigration policy. 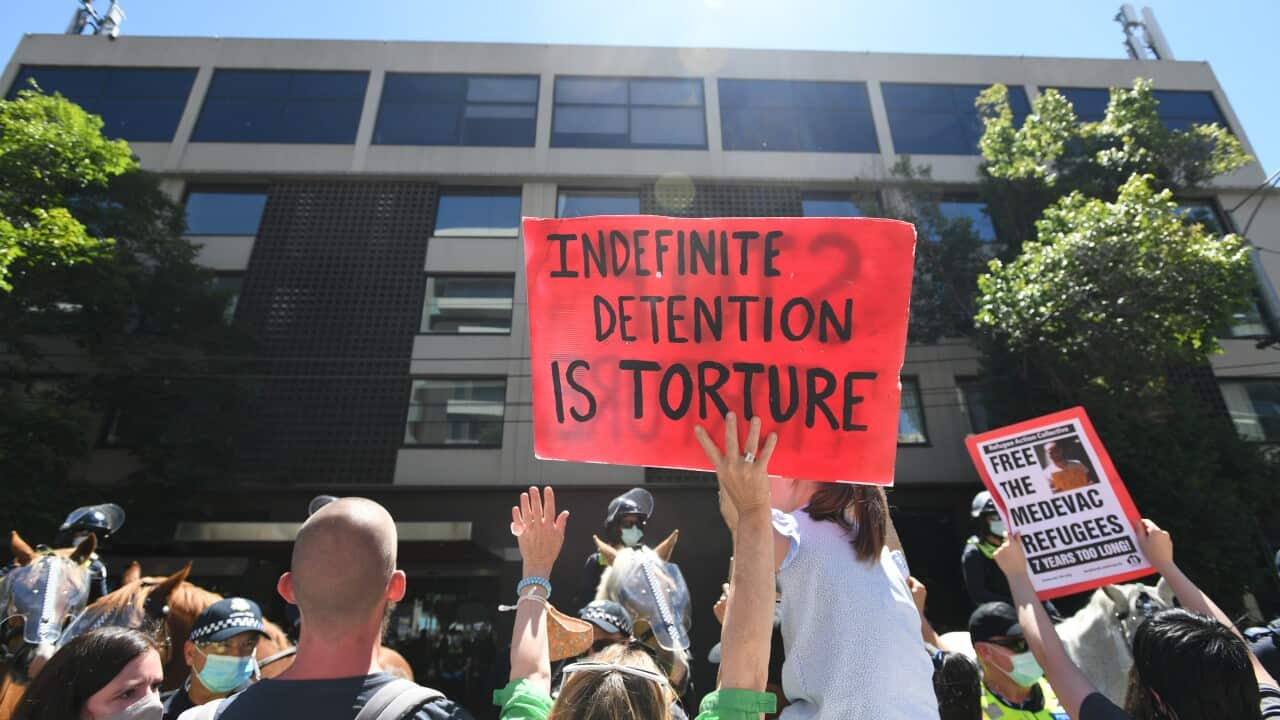 A landmark refugee rights case is underway in the High Court, and it could have major implications for Australia’s immigration detention policies.

The federal government is appealing a ruling that led to the release of Syrian man, known as AJL20, who was released from detention in September last year.

In the previous case, the Federal Court accepted the legal principle of habeas corpus, which is used to rule whether the detention of a person by the state is lawful.

Advertisement
READ MORE
Dozens of men were suddenly released from hotel detention. Behind the scenes, a tireless fight goes on

Lawyer Alison Battisson, who represents AJL20, described the case as a "landmark" decision that could have further implications for other detainees facing prolonged detention without reason.

“It is looking to find a way around decades of law that enables the indefinite detention of incredibly vulnerable people being refugees,” she told SBS News.

“The Commonwealth is obviously very concerned about this case."

The man at the centre of the case is a 29-year-old refugee from Syria who came to Australia as a child and had been detained for six years.

However, Justice Mordecai Bromberg last September found AJL20 had been unlawfully detained because the Department of Home Affairs had failed to make arrangements for his deportation to Syria, which was the primary purpose of his period of detention.

Ms Battisson said AJL20's case was significant because it showed the courts could hold the Department of Home Affairs to account when it did not fulfil its obligations.

“Australia has the most heinous and harsh detention regime in the Western world of asylum seekers,” she said.

“What is clear is that the Commonwealth is beginning to look at long term detainees who they’ve taken no action for for years - whether they should be taking action now or releasing them.”

Government lawyers on Tuesday made their case for the decision to be overturned - arguing it had resulted in an unlawful non-citizen being wrongly let into the community.

Before court on Tuesday, Solicitor General Stephen Donaghue described the decision as a “complete aberration” in Australia’s migration system.

Dr Donaghue said the Migration Act made clear that an “unlawful non-citizen” must be held in detention until they have been granted a valid visa, or leave the country.

“Unless you hold a visa you are in the unlawful non-citizen category,” he told the court.

The government has admitted it did not meet its refoulement obligations, but claims the Federal Court ruling of "unlawful" detention remains the wrongful determination.

“Even if there was inexcusable delay - no such remedy is sought here,” Dr Donaghue said.

“That is what the government doesn’t want to face up to,” he told the court.

Mr Gleeson also said the Australian government had acted in its own self-interest, without taking responsibility for their refoulement obligations.

“The remedy will be, at the least, damages for false imprisonment,” he told the court.

Mr Gleeson said the government had failed to use its “discretionary powers” to provide his client an alternative other than facing indefinite long-term detention.

He said the failure to provide a reason for detention meant the Federal Court was justified in ordering his release from detention.

The Australian government argues the Federal Court should instead order the Department of Home Affairs to comply with its refoulement obligations by making arrangements for AJL20’s return to Syria.

The High Court case comes as dozens of asylum seekers who came to Australia under now-repealed medevac laws have been released from immigration detention in Melbourne, Brisbane and Darwin since early this year.

Lawyers acting on behalf of the transferees have claimed this decision follows complex and ongoing legal battles seeking to prove the detention of the men was unlawful.

Ms Battisson said the medevac cohort is a “complex” group and it is unclear how the AJL20 case could “impact on those releases”.

The High Court has now adjourned to consider its decision.