A year out from the FIFA World Cup, scrutiny on Qatar’s human rights record is growing

It's now less than a year until the 2022 FIFA's Men's World Cup in Qatar. But as excitement grows about matters on the pitch, off it, human rights organisations remain deeply concerned. 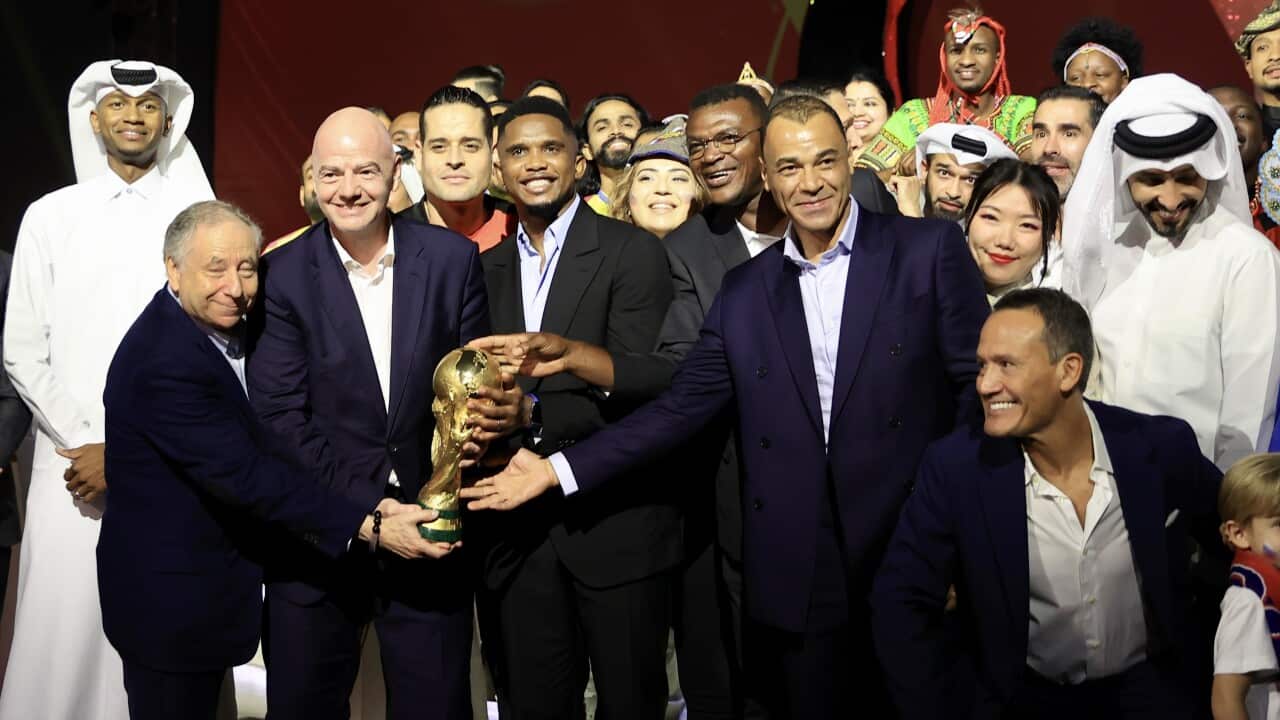 FIFA President Gianni Infantino said on the weekend "all are welcome" in Qatar. Source: Anadolu Agency via Getty Images

This past weekend on a warm Sunday evening in Doha, some of football's greatest ever players and a host of dignitaries came together for the unveiling of the 2022 FIFA men's World Cup countdown clock.

FIFA President Gianni Infantino was among those who couldn't hide his excitement, as one of the biggest events in world sport fast approaches.

Qatar will hold the first football World Cup in the Middle East in under a year. Source: ABACA

However, the tournament has been dogged by various forms of controversy since being awarded hosting rights in 2010.

The country has relied heavily on foreign workers to help build seven new stadiums and a range of infrastructure projects for the event.

Thousands of those workers have died.

It's unclear exactly how many fatalities have been linked to stadiums and infrastructure projects for the World Cup, but official figures show that 15,021 non-Qataris – of all ages and occupations – died between 2010 and 2019.

"We know that thousands of migrant workers have died in relation to building sites and construction in Qatar, not just on the stadiums, but roads and related infrastructure projects," Ms Pearson said.

"This is a real concern for us, because of the heat stress and long hours people are working under unsafe conditions."

A view of the Al Bayt stadium, one of the eight venues for the 2022 FIFA Men's World Cup. Source: EPA

An estimated two million migrant workers make up 95 per cent of the country's workforce.

The International Labour Organisation, a United Nations agency, has found in 2020 alone, 50 workers died and 506 were severely injured on worksites in Qatar.

Until recently, Qatar, like many middle eastern countries, implemented the Kafala labour system and didn't allow workers to change jobs without their employer's permission.

Ms Pearson said such a system should not be permitted.

"It's quite akin to slavery and we have called for the complete dismantling of that system," she said.

Lusail Stadium is one seven new venues that have been built for the 2022 FIFA Men's World Cup. Source: FIFA via Getty Images

"Unfortunately, what we are seeing in 2021, is that these reforms are not being implemented and that means the situation for workers on the ground remains largely the same," Ms White said.

The local organising committee for the tournament disputes these allegations.

Nasser Al-Khater, the CEO of the 2022 Qatar World Cup, said the country has been unfairly judged.

"Unfortunately, a lot of entities that put up these [rights] reports, don't even both to come here to see things for themselves," Mr Al-Khater said.

Human rights advocate and former Socceroo Craig Foster said players need to be aware of these issues ahead of the tournament.

"They have to make a decision as to whether they feel comfortable with thousands of people falling off scaffolds on the buildings of stadiums there going to play in," Foster said.

Several teams, including Germany and Norway, have made statements on human rights issues in Qatar during World Cup qualifying.

Denmark has said its training kit for the event will include messages critical of Qatar.

Denmark's training kit for the event is set to include messages critical of Qatar. Source: Ritzau Scanpix

The Socceroos are yet to qualify for the tournament, but if they do, Foster believes they'll come under pressure to speak up.

"I've had some discussions with some of the Socceroos in recent months around what that may look like," Foster said.

"No doubt, every team going into this World Cup, has to first understand what human rights are, secondly, how they are being abused in countries like Qatar, and thirdly, have to make a decision on if they feel comfortable playing."

"Sport should uphold human rights, not be complicit in their abuse."

LGBTIQ+ rights are also a major issue ahead of the event, as homosexuality is illegal in Qatar.

Rainbow flags will be allowed to be displayed inside stadiums and the organising committee has assured the safety of LGBTIQ+ spectators.

The Sydney Rangers are one of Australia's biggest LGBTIQ+ sporting clubs, with Secretary Chris Hicks saying the majority of members aren't willing to attend.

Mr Hicks said he and others would be uncomfortable travelling to Qatar.

"[Qatar] are just pulling the wool over people's eyes," he said. "Unless there's longer-term change, they are just talking in sound bites."