'Abortion is healthcare': Hundreds rally in Sydney over fears of US-style abortion bans

Hundreds have rallied in Sydney in support of reproductive rights in the United States and at home. 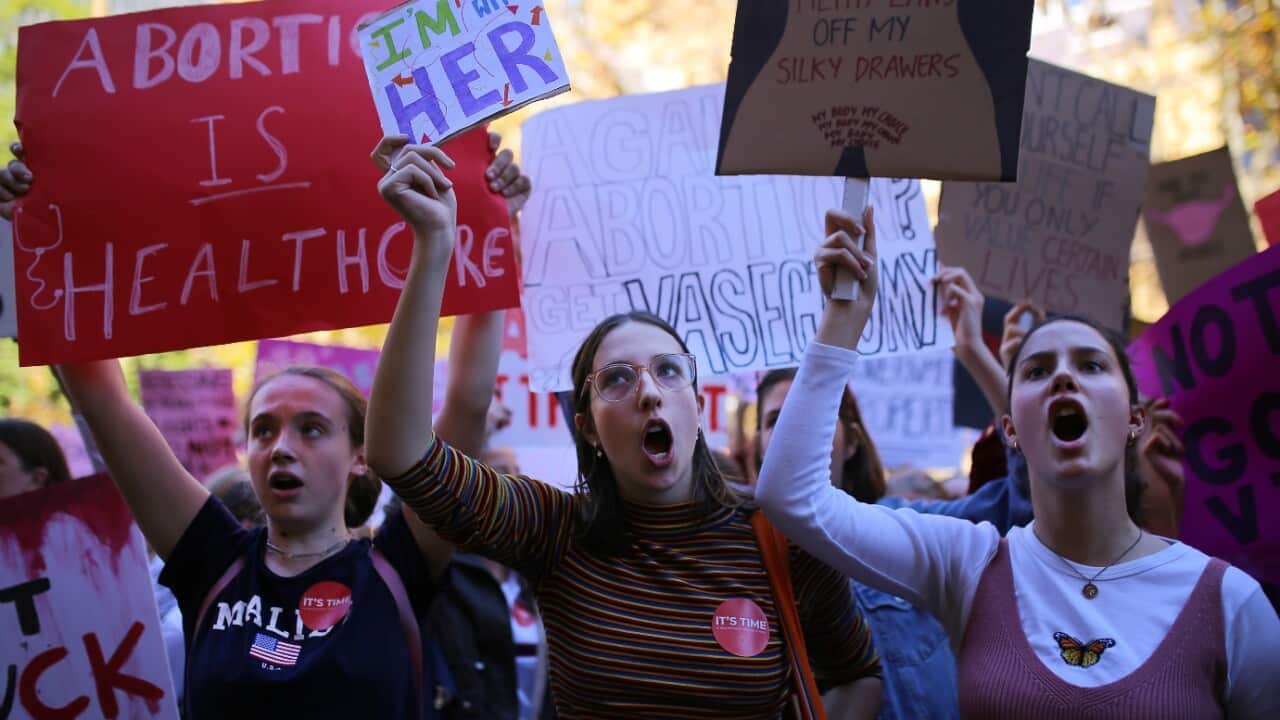 Protesters hold placards during the Our Body Our Choice march in Sydney, Sunday, June 9, 2019. Source: AAP

Protesters brandished signs reading, "Abortion is healthcare", "Keep your filthy paws off my silky drawers" and "Ovary-acting? I think not" as they congregated at Hyde Park on Sunday.

Bella Ziade, a 17-year-old high school student, conceived the idea for the Our Bodies Our Choice March after hearing of new abortion restrictions in several states of the US.

Advertisement
"Seeing everything that happened in the US, we are impacted by anything American, we're so impacted by Western culture. It’s still a criminal offence. That could easily become our reality in NSW and it scared me," she told SBS News.

"There’s no point in being silent about it because silence is an act of violence in itself. We need to use our voices and spark change and this is why we are here today. I think I tapped into a good time because a lot of people are about it."

Thousands expressed backing for the event on social media, including Greens Senator Mehreen Faruqi, who unsuccessfully moved a bill in 2017 to decriminalise abortion in NSW.

"I was surprised myself that in 2017. My bill to decriminalise abortion and to create safe access outside reproductive health clinics was the first attempt in the history of the NSW parliament to do that," she told SBS News.

In Alabama, there is now a near-total abortion ban with no exception for rape or incest, while so-called foetal "heartbeat" bills in other states have also restricted access.

Protesters have called for access to abortion services to be viewed as a 'fundamental right'. Source: Facebook/Our Bodies Our Choices

But the rally in Sydney was organised to bring attention to the current state of abortion laws in Australia, which make it a crime in certain instances in New South Wales and South Australia.

The senator previously highlighted that women in regional areas and those from culturally diverse backgrounds are particularly vulnerable.

“Access to abortion is pretty much a geographical, racial and class lottery.”

Protesters march with placards during the Our Body Our Choice march in Sydney, Sunday, June 9, 2019. Source: AAP

Sinead Canning, the campaign manager of the NSW Pro Choice Alliance, said the grouping of dozens of organisations was pushing for abortion law reform in the state this year.

"We've been meeting with politicians for the past few months and we've been getting quite positive signs. We do think there will be a bill on the table by the end of this year," Ms Canning told AAP.

She said in NSW, abortion had been in the Crimes Act since its inception in 1900.

"We want it completely removed from the Crimes Act. A woman should never be prosecuted for accessing a termination of pregnancy," she said.