'Absolute devastation': Saving the koalas on the frontline of NSW's fires

Hundreds of koalas are estimated to have perished in the deadly New South Wales bushfires. SBS News spoke to one woman doing her best to make sure that fate doesn't await more. 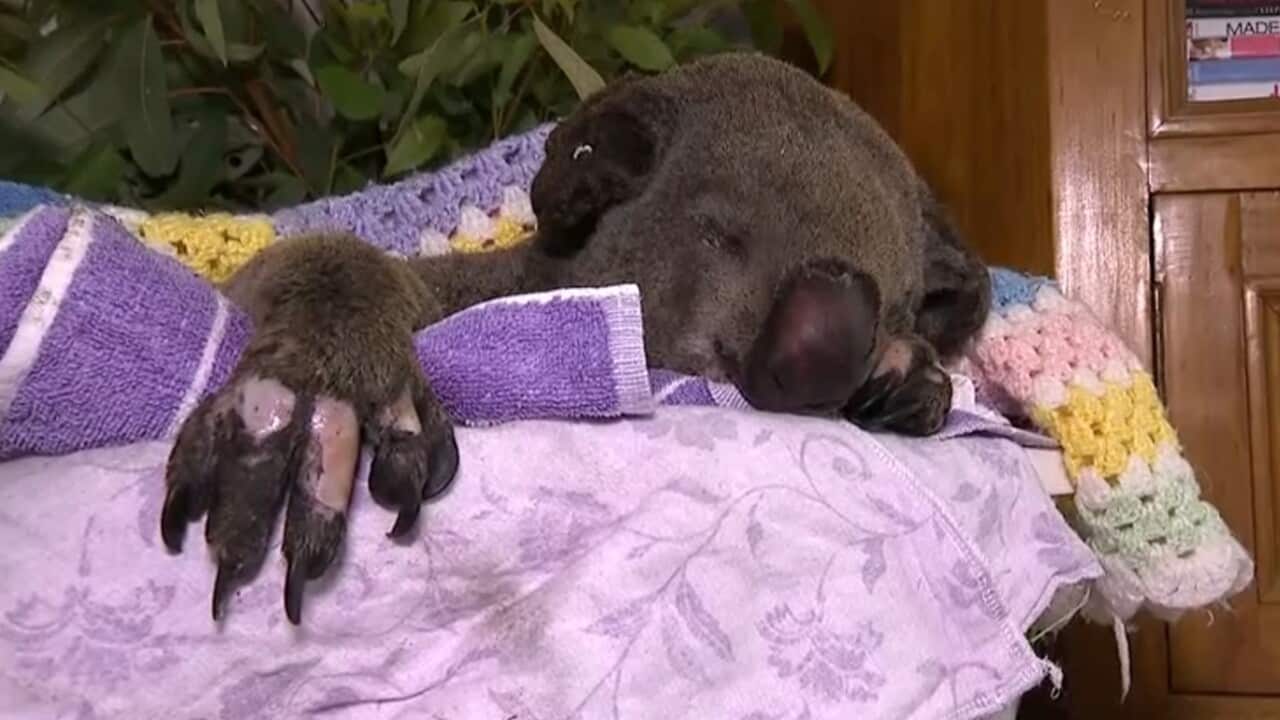 An injured koala with razed hands from the bushfires Source: SBS

Christeen McLeod has had a busy, eye-opening few days.

“In all of my life I’ve never seen anything like what’s unfolded since Friday with the fire,” she told SBS News.

Advertisement
Ms McLeod is the facility manager at Koalas In Care, a rescue service for sick and injured koalas in the New South Wales town of Taree.

Christeen McLeod cares for an injured koala in her loungeroom. Source: SBS

The town has been one of the worst-affected by the deadly NSW bushfires, which have already taken a heavy toll on the state’s koala population.

Ms McLeod and her husband Paul have been forced to step up operations in recent days; taking koalas affected by the fire into their loungeroom.

“We can only imagine the impact that [these fires are] going to have on koalas in the area.

“It’s a little bit too much to handle, emotionally, to see these animals burnt to a crisp.”

On Tuesday, the service received an orphaned female joey. Her mother had died and she’d been left in the fire zone.

An injured koala with razed hands from the bushfires Source: SBS

Caring for the koalas is a labour-intensive process, Ms McLeod said.

“Once we assess them and we start their treatment, it’s a very full on-regime,” she said.

“These animals are highly-distressed from the ordeal of the fire, so we have to sedate them to be able to treat them because they want to bite and lash out at us.

“For our own safety and their own goodwill, they’ve got to be sedated to attend to all their injuries.”

Christine McLeod cares for a koala in her loungeroom Source: SBS

Twenty-six koalas were being treated on Tuesday afternoon.

“We were scheduled to release three koalas on Friday when this started to unfold, but we had to cancel that,” Ms McLeod said.

“Thank goodness we did, because they would have been right in the line of fire.”

Ms McLeod said she isn’t sure what the future holds for the area’s koala population.

“We’ve lost a lot of our koala habitat and because we haven’t been able to get into the area yet, we really don’t know what we’re going to find when we get on the ground,” she said.

“In the future, we’re going to have to look at where we’re releasing and what’s actually left in vegetation.

“That in itself is going to create all sort of existing problems for the koalas that have survived.”

Koalas are headed for extinction in New South Wales as early as 2050, according to the World Wildlife Fund.

More than 5000 hectares of koala habitat in northern NSW has been lost since the state repealed its Native Vegetation Act in 2017,
the group said in a report last year
.

WWF International President Pavan Sukhdev also
wrote to Prime Minister Scott Morrison in February
, asking him “to commit to urgent and effective action” to halt the rate of deforestation.