Members of Zohra - Afghanistan’s first all-female orchestral ensemble - will take to the stage for two special performances in Melbourne and Sydney. 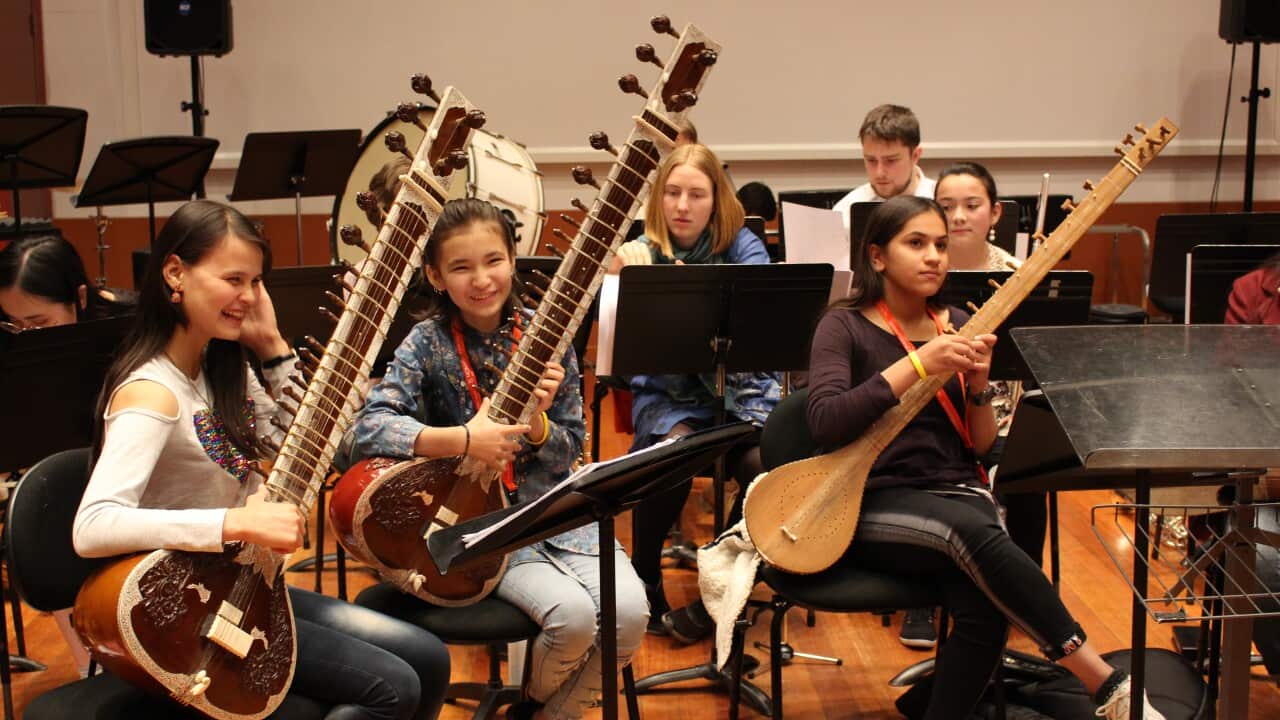 Members of the Zohra orchestra at rehearsal. Source: SBS news

During Afghanistan’s bloody thirty-year civil war, the sound of music was one of the first casualties.

Freedom of expression was censored by successive brutal regimes and musicians were often imprisoned and tortured.

For five years in the late 1990s, music was completely banned by the Taliban for its “corrupting influence.”

Advertisement
Now, members of Afghanistan’s first all-female orchestra are hoping to rebuild their country’s musical heritage and showcase Afghanistan’s vibrant culture to the rest of the world.

The Zohra ensemble rehearsing in Melbourne. Source: SBS News
Zohra, an ensemble based in Afghanistan’s National Institute of Music, is touring Australia with performances in Melbourne and Sydney.

The orchestra, founded in 2015, has played in cities across the world, including a high profile performance at the World Economic Forum in Davos 2017.

"We want to open the door for new generation in Afghanistan because if we do not do it, another generation will never do it,” Meena Karimi, a fourteen-year-old performer with the ensemble, said.

That's why we play music; we show the beauty of our country for all the world, and all the country we met.

Meena’s choice to follow her passion for music means she has had to hide her talents from some members of her family.

"We all face challenges, my family support me but my relatives, my uncle, my aunt, they didn't know that I play music,” she said.

“When they understand and when they are ready to know I will tell them."

Dr Ahmad Sarmast is one of the driving forces behind Zohra and the Afghanistan National Institute of Music.

He fled to Australia as a refugee in 1994 and achieved his PhD in music at Monash University in 2005.

"I strongly believe in the soft and transformative power of music,” Dr Sarmast said.

“For me, music isn't a type of entertainment. For me, music is a much bigger and greater vehicle and a very powerful vehicle for contributing to several aspects of any given nation.”

In 2010 he decided to return to his homeland, to try and restore Afghanistan’s music industry.

In a country like Afghanistan, which is still in a war for 40 years, the Afghan people need to benefit from the healing power of music.

With the approval of the Afghan government, Dr Sarmast founded the Afghanistan National Institute of Music to educate the next generation of Afghan performers.

The Institute allocates 50 per cent of its enrolment to disadvantaged and homeless students and also educates young girls, a controversial concept in Afghanistan.

In 2014, the Taliban attempted to silence Dr Sarmast permanently.

He narrowly survived a suicide bomb a concert, which temporarily deafened him.

Dr Sarmast was flown back to Australia to remove shrapnel from his skull and his hearing has been partially restored.

Despite incurring the wrath of extremists, Dr Sarmast has pledged to continue his mission.

“When my students are playing in the international arena and stages, I’m extremely proud,” he said.

The two performances by members of Zohra and Australian musicians are part of a series of celebrations marking half a century of diplomatic relations between Australia and Afghanistan.

“It's very important for an Australian audience to understand what capacity and potential exist in the Afghan community,” Wahidullah Waissi, the Afghan Ambassador to Australia, New Zealand and Fiji, said.

Dr Sarmast said he sees this Australian tour as an opportunity to give back to the country that gave him refuge.

"It is a dream that I had, to come with a group of students here to perform and to show and to share the beauty of Afghan music with my fellow Australians,” he said.

“My students are showing the best side of Afghanistan, the diversity that exists in Afghanistan society.”

“We are very happy to show the positive side of the last eighteen years and what Afghanistan achieved in the last years and how far Afghanistan moved.”