After a slow start to the COVID-19 vaccine rollout, can Australia still meet its October target?

Australia’s COVID-19 vaccination program has gotten off to a slow start and a stoush has broken out between the federal government and the states over the rollout. Will it have any impact on when Australians are vaccinated? 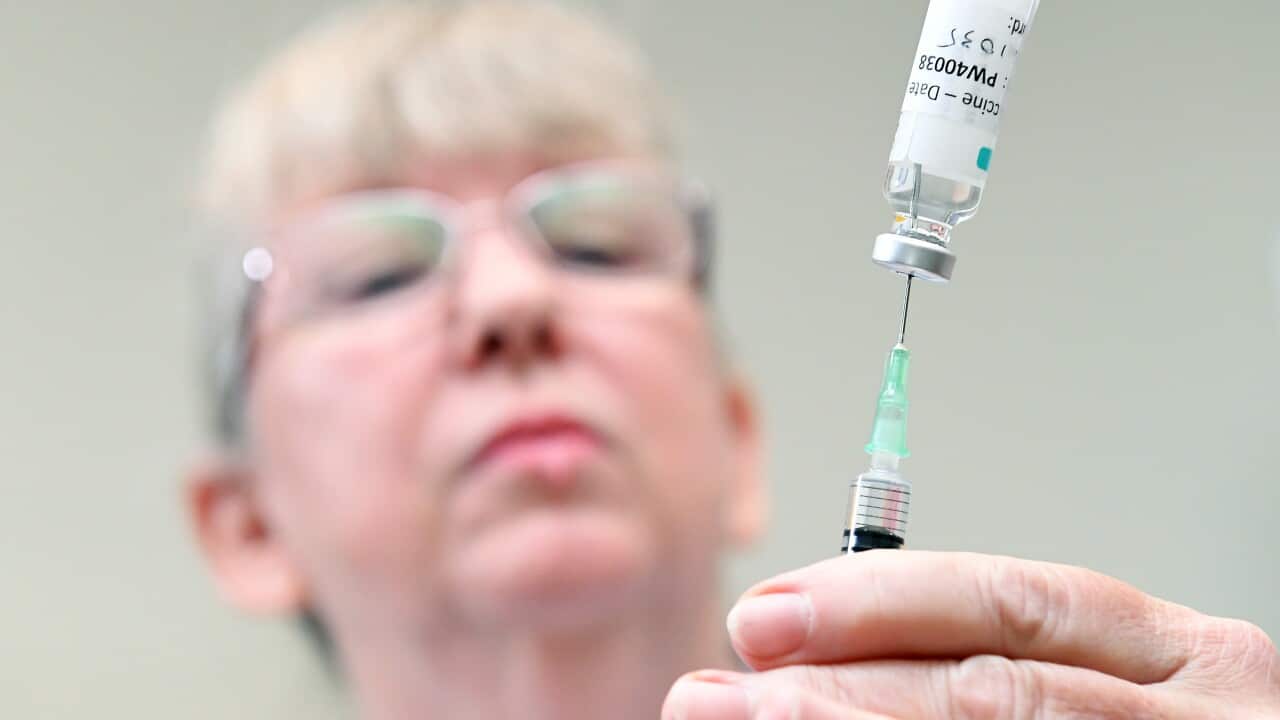 A nurse draws from a vial of Covid-19 vaccine at the Camp Hill Medical Centre n Brisbane on Monday, March 22, 2021. Source: AAP

The early stages of Australia's coronavirus vaccine drive have not proceeded as initially planned, with a public row breaking out between the federal government and the states over the rollout this week.

NSW and Queensland premiers on Wednesday pushed back against accusations of stockpiling, amid another COVID-19 outbreak and scrutiny around delays in the early vaccine rollout.

Less than 800,000 people have so far received COVID-19 shots, falling millions of doses short of the initial target of four million by the end of March.

"We haven't changed our time frames with regards to any of our milestones and when we do, we will indicate that," he said on Wednesday.

So what is happening with the rollout, and will Australians still be vaccinated by current deadlines?

The European Union has blocked more than one shipment of coronavirus doses to Australia, arguing that vaccine producer AstraZeneca must first make good on its promised deliveries to the bloc.

Department of Health Secretary Brendan Murphy previously told a Senate estimates committee there had been various attempts to get more shipments of AstraZeneca's vaccine to Australia from overseas, but he had no expectation of receiving any soon.

La Trobe University Associate Professor of Public Health Deborah Gleeson told SBS News it was unclear how much of a role international supply issues had played in delaying the vaccine rollout.

But she said it would be less of an issue as the domestic supply of the AstraZeneca kicks in, following the national medical regulator's approval of locally-made doses last week.

Professor Gleeson said Australia’s decision to secure its own manufacturing of doses was smart, given the global shortages in supply being seen around the world.

Two federal ministers sparked outrage from NSW and Queensland with their criticism of the speed of the rollout and the warehousing of doses.

"Our biggest issue with the vaccines at the moment is to make sure that the states and territories roll out the supply of the vaccines that they have," Tourism Minister Dan Tehan said.

It came as data leaked to News Corp Australia showed NSW had administered only half the doses it had received, implying the state was stockpiling.

But NSW Premier Gladys Berejiklian said the reports were not true and her government wanted to speed things up.

She has now written to Prime Minister Scott Morrison seeking the green light to increase NSW's role in the vaccination program, and warns that without cooperation the federal government will miss its October deadline.

"The quicker people are vaccinated, the quicker we can look forward to the easing of restrictions, to feeling safer and to overseas trips, and I think that's something all of us would welcome," she said on Thursday.

Queensland Premier Annastacia Palaszczuk, meanwhile, wants federal authorities to publish daily figures on the number of vaccinations and supplies of vaccines to each state and territory to provide greater transparency.

"We give out our figures every day and it would be great to see the Commonwealth do exactly the same," she said.

RMIT Professor of Immunology Magdalena Plebanski said international coronavirus vaccine rollouts had often taken a month or so to begin ramping up as supply chain issues were dealt with.

She expects the same from Australia’s program.

“If you look at the graph of how many vaccines are taken per day, it takes about a month to kick in. There is a big increase in how vaccines are deployed and taken up after a month,” Professor Plebanski said.

“There is not a dramatic reason for the delay here. Vaccine rollouts get into a rhythm and I expect the issues to be solved as the program continues."

Professor Plebanski said the delays to the initial timeline matter less than the fact a safe and effective vaccine is being rolled out to the people who need it.

“The really important thing is the way the vaccine is being deployed, with health care workers and vulnerable people first. That will save lives," she said.

"If we all get vaccinated by October, great.

"If it takes a few months longer, so be it.”