After medevac was scrapped, what now for the sick refugees stranded on Nauru?

The repeal of laws that gave doctors more say in the medical transfer of sick refugees to Australia is another blow to those whose transfer was approved under the previous laws but blocked by the Nauruan government. This is Shiva's* story. 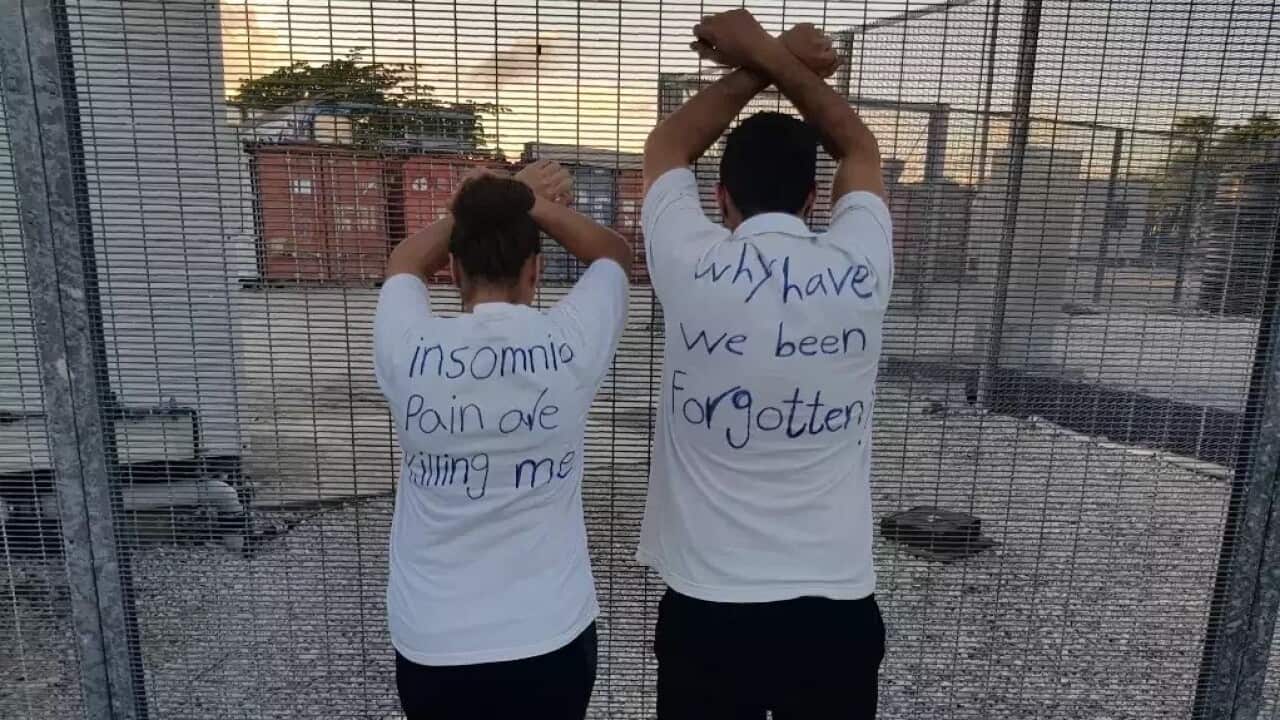 Shiva* and her son have had approval to go to Australia for nearly six months, but remain stuck on Nauru. Source: Saba Vasefi

Iranian woman Shiva* has been waiting six months for Nauru to facilitate her medical transfer to Australia.

She has a history of illness, self-harm and neurological problems and is one of about a dozen refugees who remain stuck in detention on the tiny Pacific Island despite being approved for an urgent transfer.

Earlier this month, days after the Morrison government repealed the medevac laws, Shiva took steps to set herself on fire.

Advertisement
"Now, I've been told medevac has been repealed and I'm back to where I was 10 months ago with further pain and deeper untreated wounds," she told SBS News.

The reversal of the medevac laws - which gave doctors more say in the transfer of sick refugees to Australia for treatment - has sparked concerns that already approved transfers will be further delayed or blocked by the Nauruan government.

Shiva came to Australia by boat in 2013 and is one of only 10 female refugees who remain on Nauru.

"I don't know what crimes in Australia are sentenced to six year's prison under extreme degradation," Shiva said.

This month, Shiva poured petrol on herself but was stopped before she could light a fire.

Last year, she sustained burns while coming to the aid of her brother who set himself on fire. He was transferred to a mental health facility in Australia for two months and is now being held at a detention centre in Melbourne.

Shiva's mental state has also worsened since a stray dog she took in died.

But Mr Dutton’s office noted the transfer was dependent on local approval from the Nauruan government.

The tiny Pacific nation, home to 258 refugees and asylum seekers, has failed to facilitate Shiva’s transfer despite Australian-based doctors who assessed her case warning that she was at “extremely high risk” of attempting suicide and her mental and physical health would continue to rapidly deteriorate.

In documents seen by SBS News, two doctors who reviewed Shiva’s case notes and history of illness also advised that she was showing signs of multiple sclerosis, Parkinson’s disease and may have suffered a stroke.

“A neurological assessment must be conducted urgently,” the notes said.

They recommended Shiva, along with her son and husband, be urgently evacuated to a specialised facility in Australia to receive the necessary treatment, including psychiatric hospitalisation and long-term trauma counselling, which was not available on Nauru.

The Nauruan government requires two doctors who have seen the patient face-to-face to sign off.

In another case, a refugee with spinal cord compression and diverticulitis, a bowel infection, was approved for transfer to Australia in early August under medevac laws, but he remains on Nauru.

Doctors for Refugees founder Barri Phatarfod said the young man is in constant pain and recently sent a message to one of their doctors saying he has had fevers for the past two weeks.

“If he develops peritonitis or a bowel rupture this would be catastrophic,” Dr Phatarfod said.

After more than 130 sick refugees and asylum seekers and their relatives were transferred to Australia under the now-defunct medevac laws, refugees now face a return to tighter restrictions on travel to Australia for treatment.

But those who have already been signed off by Home Affairs Minister should still be valid, as the repeal legislation passed by the Senate does not apply retrospectively.

A Home Affairs department spokesperson said they did not comment on individual cases, but confirmed those who had already been approved for transfer would not have to restart the process.

But, their cases may be reviewed.

The Federal Government has won the right to appeal a Federal Court ruling relating to dozens of medical transfers of asylum seekers. Source: AAP

Some doctors are also concerned scrapping the medevac laws may also hurt refugees’ chances of being allowed to leave Nauru by an already reluctant Nauruan government.

Public law lecturer at the University of Adelaide Alex Reilly said while the medevac approvals were still valid, it was an unusual situation because the now-defunct process was meant to be completed within two weeks.

“That certainly undermines the intent the medevac law which was to ensure applications were assessed very quickly by medical professionals so that people could access emergency medical care,” he said.

The Australian government succeeded in its bid to reverse the medevac laws with the support of key crossbench senator Jacqui Lambi amid claims of a secret deal.

While the government has denied a deal was done, Senator Lambie indicated there had been some agreement, but she could not reveal what it was citing national security.

The Sydney Morning Herald and The Age have reported that in negotiations with Senator Lambie, the door has been left open to resettling refugees on Nauru in New Zealand.

While uncertainty surrounds her transfer to Australia, Shiva said she had been told by her caseworker she was pursuing potential resettlement in New Zealand.

Women remaining on Nauru would reportedly be given priority in any deal involving New Zealand.

But Shiva is not holding out much hope.

"I don't believe in the promises and hollow words. No one speaks about our existence on Nauru. No one acts to end this injustice. No one answers. No one takes responsibility for our adversity."

Pressure on Australia to intervene

The Australian government is under pressure to ensure the Nauruan government allows people requiring emergency treatment to leave.

Dr Phatarfod said it was an unprecedented situation.

“The set-up where a foreign nation can overrule Australia’s processes is truly mystifying and has zero transparency,” she said.

“The Australian government has a very close relationship with the Nauruan government and you would hope that they can talk to them and expedite the process.”

But he suggested the Australian government had not made a fuss because it did not support the medevac legislation.

Instead, a spokesperson issued a statement saying individuals on Nauru still have access to health care provided by the International Health and Medical Services.

“Where there is a medical emergency requiring urgent treatment, an air ambulance is chartered and the transfer takes place within a short timeframe,” the spokesperson said.

Dr Phatarfod said the nearest air ambulance would take six hours to reach Nauru, making it a 12-hour round trip to get a patient to an Australian hospital.

The Nauruan Government did not respond to a request for comment.

*Names have been changed.