The reopening to skilled workers and international students comes after a two-week pause due to concerns around the Omicron COVID-19 variant. 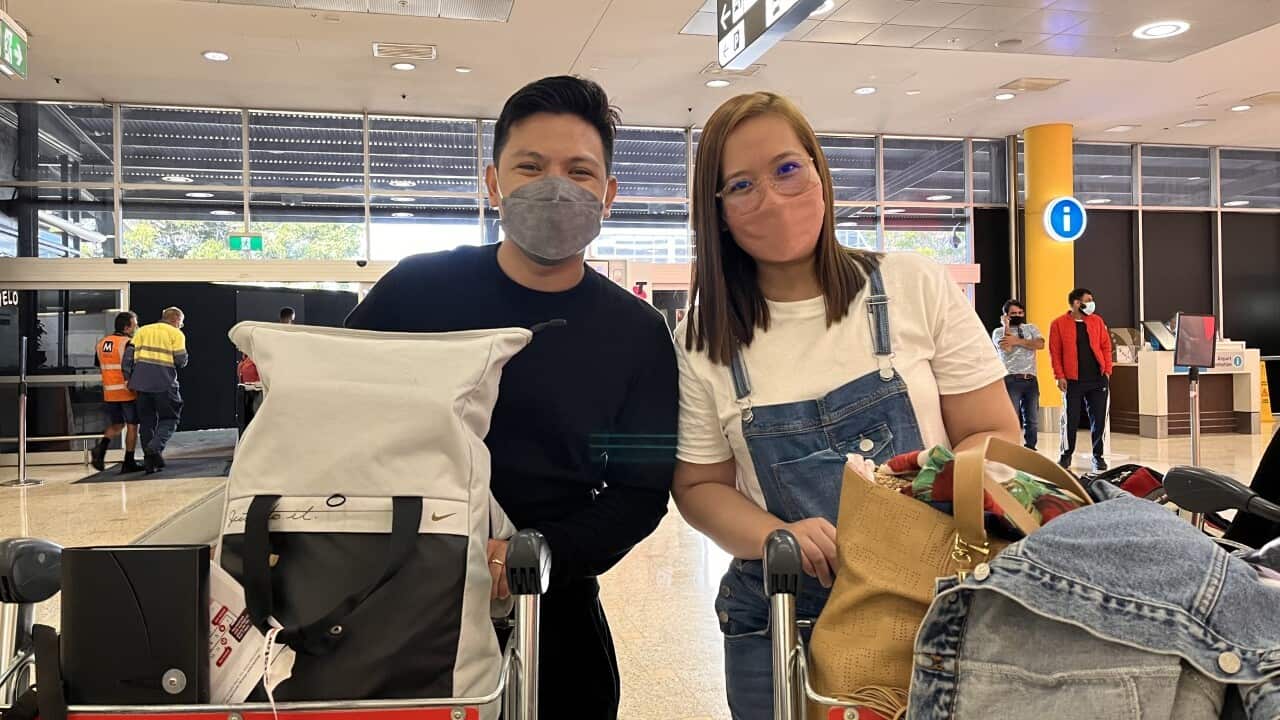 Newly-arrived visa holders say they're elated to have touched down in Australia, nearly two years after international borders closed at the start of the COVID-19 pandemic.

As of Wednesday, fully vaccinated skilled workers and international students are allowed to come into Australia without needing a travel exemption.

It comes after the federal government placed a two-week pause on visa holders being able to return over concern about the arrival of the Omicron variant.

Zadly Flores has waited almost two years to begin studying his master's of management in Australia.

He and his partner said they were very happy to have finally landed in Sydney from Manila via Singapore on Wednesday morning.

“It’s sad to say due to the pandemic the quarantine was extended and extended, but at least now we’re here and we’re good and we’re fine," he said.

He said he was looking forward to getting into his education and "the Australian life".

“I just wanted to say to all other students that are currently in their respective countries: don’t lose hope. Just always pray [you] can enter here and also experience the Australian life.”

Ankit Pokhrel completed his undergraduate studies in Australia while on a student visa two years ago.

He flew out to celebrate his graduation but got caught up in the pandemic.

"I tried to come here. I applied for a travel exemption and everything but there was no luck," he said.

"It’s a great feeling," he said. "I’ll probably work and have fun while I’m in Australia. I just graduated two years ago and haven’t been able to have fun."

Software engineer Aravind Parchura arrived from Hyderabad in India on Wednesday morning with just one month left on his visa.

"I was waiting two years at my home country because of the flights being banned and COVID restrictions ... it’s cost almost two years of my career," he said.

"I was waiting for this pandemic to get over and to carry on with life. The impact was personal for me and my family.

"I’ve finally arrived and I’m happy to be here. I’ll go to quarantine for three days, get tested and resume my work."

The government estimates about 235,000 visa holders would now be eligible to enter the country, including an estimated 133,000 international students.

"We have missed their presence dearly and couldn't be more delighted to welcome them back from today," Ms Jackson said. "We recognise the very real effects COVID-19 has had on their wellbeing, and the resilience they have shown amidst extreme uncertainty."

Wednesday also marks the start of a travel bubble with Japan and South Korea, as well as
the reopening of Tasmania's border to vaccinated people from the rest of Australia
.

People entering Tasmania from certain high-risk areas must however return a negative COVID-19 test in the 72 hours before they arrive. Unvaccinated people will still need to apply for a travel exemption to enter.

Virus restrictions have also been relaxed in NSW, with the unvaccinated now able to enter retail and hospitality venues.

There have been fears the decision to open up to the unvaccinated will lead to an even bigger spike in COVID-19 cases in the state, after NSW saw a large rise in infections due to Omicron.

NSW announced on Tuesday night that fully vaccinated arrivals from the eight southern African countries would no longer have to enter 14 days of hotel quarantine, bringing all international arrivals under the same requirements.

Nationally, 89.5 per cent of the population over 16 is fully vaccinated while 93.4 per cent have had one dose.

The number of people who have had their booster shots is now more than 771,000.

With reporting by Dijana Damjanovic and AAP.