An anonymous online clinic staffed by trained therapists is helping men deal with depression and anxiety - and it’s being supported by an Olympian who shares their struggles. 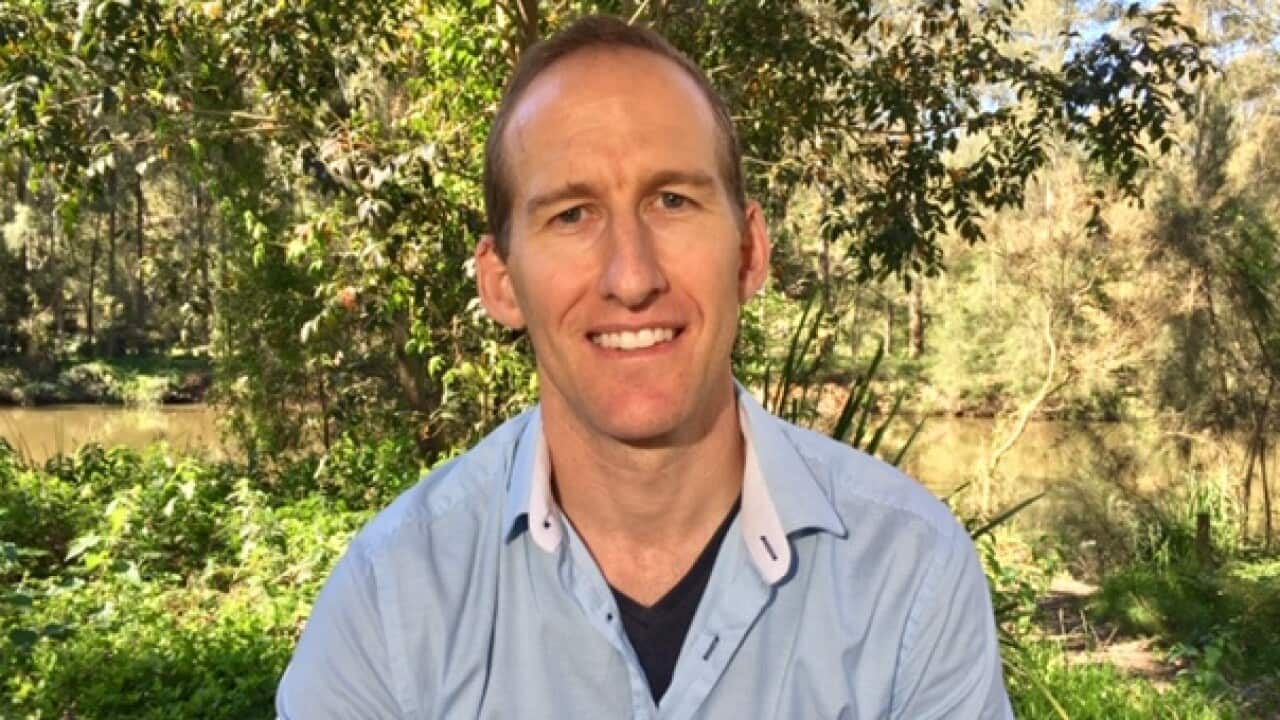 Clinton Hill is a tall, lean 39-year-old. He appears to be a picture of health.

But the former Australian 400m champion has battled anxiety for years.

“I have mini panic attacks and get shortness of breath, it’s usually when I am alone and thinking back on what went wrong,” he tells SBS.

Advertisement
“I still dream about the Olympics every single night.”

“And they are not good dreams, either; it’s always not being able to run, or running on the spot.”

Clinton’s athletics career ended suddenly in 2011 when he tore his Achilles tendon and was forced to withdraw from competition eight months before the London Olympic Games.

It was a challenging time after decades of training and competition culminating in an Olympic silver medal in the men’s 4 x 400 relay in Athens in 2004, and Commonwealth gold in the same event at the 2006 Melbourne games.

“Winning a race is a mad high and a natural addiction ... I still get goosebumps thinking about it now.”

Clinton Hill won a gold medal in the men's relay at the Commonwealth Games in Melbourne in 2006. Source: AAP

Clinton began his athletics career in South Africa, before migrating to Australia with his family in 1997.

“I gave up partying and socialising in my teens and 20s. When you are supposed to be having fun, I was always out training.”

“I saw moving to Sydney as one step closer to Olympic competition, and I became an Australian citizen on June 6, 2000 just before the Sydney Olympics.”

He is still troubled by the way his dream ended.

“The injury was not on my terms, it ends your career, and so you start asking yourself ‘what do I do now?’”

Clinton Hill won a silver medal for Australia, in the men's relay in Athens in 2004. Source: AAP

Several top male athletes have spoken out about their mental health struggles in recent years.

Australia’s most decorated Olympian Ian Thorpe has previously revealed his battle with depression which he hid from those closest to him for many years.

But men are less likely to ask for help, with Beyond Blue finding fewer than 30 per cent of men access services for mental health issues, compared with 40 per cent of women.

“Men often don’t have a language about their mental health and see it as something very personal, so they have limited experience speaking with friends or family about symptoms.”

“We know that 20 per cent of all men will experience a clinical level of anxiety and depression in a year, and very few reach out for help. However, most have access to the internet.”

The 'Wellbeing Course' is offered by Macquarie University's eCentreClinic and was developed by Associate Professor Dear and his colleague, Professor Nick Titov.

Men can remain anonymous while doing the online course, and research is analysed for a new project, called The Things You Do which explores links between everyday behaviours and mental health.

The program runs for eight to ten weeks, with participants working through weekly course materials and learning about depression and anxiety while gaining skills to manage their symptoms.

It is staffed by eight full-time researchers and, so far, 350 participants have accessed the course.

Macquarie University's eCentre Clinic develops mental health materials which are also used by Australia's national online clinic Mindspot, which has supported more 100,000 Australians with mental health issues since 2012. And until now, most of its course participants have been women.

“With our eCentre clinic, men are encouraged to access a mental health professional with the click of a mouse," Associate Professor Dear said.

“We’re targeting a really broad range of men from across the country. They may be in cities or towns.”

“And we are particularly targeting people who wouldn’t seek out a professional, to discuss their mental health.”
Men are able to access the course anonymously. Source: SBS

Participants are not required to give their full names, only an email address and phone number.

“And if they are interested they can go into an online treatment course.”

“One of the skills that people find helpful is called ‘thought challenging’. We know when people are depressed, their thinking becomes more unrealistic and more negative,” Associate Professor Dear said.

“Examples of unhelpful thoughts would be: ‘I am worthless, no-one likes me, there’s nothing I can do, it’s all too much I cannot cope’.

“We try to tackle unhelpful thinking one thought at a time. And the course materials encourage people to remember what they’ve achieved in the past.

“So slowly, people start to keep their thinking more realistic and more positive.”

Clinton's first marriage ended around the same time he withdrew from Olympic competition. He has since re-married and the father-of-four says he understands why many men are reluctant to speak up.

"I may sound happy, confident and content, yet inside I am anything but. I still have barriers up which prevent me asking for help because, for me, it’s a sign of weakness and weakness means I will let others down," he says.

“As an elite athlete, you are trained not to show fear or weakness. If you show anxiety and stress - those nerves mean you’ve already lost the race."

Clinton Hill with his current wife Michelle and their two children. Source: Supplied

After withdrawing from Olympic competition, Clinton sought professional advice to deal with his mental health issues, and now wants to help other men who are suffering in silence.

Last year, he rode more than 400 kilometres over three days with a group of 25 others to raise money for mental health. The funds help Associate Professor Dear to promote the Wellbeing Course to men online.

In November, he and foundation co-founder Gareth Pike hope to raise another $100,000 with a group of 50 cyclists, on a three-day tour from Sydney's Sutherland Shire to Kiama.

More than 40 per cent of men taking part in the course have reported a reduction in symptoms.

“We are getting excellent feedback and more than 90 per cent say they would recommend the program to other men,” Associate Professor Dear said.

To learn more about eCentreClinic research or apply for the next Wellbeing Course starting on 11 November
ecentreclinic.org/WellbeingCourse

Online assessment and treatment courses for anxiety and depression are available at mindspot.org.au