A French animal rights group has defended its decision to remove a puppy from a homeless man and put it up for adoption, saying the act had prevented animal cruelty. 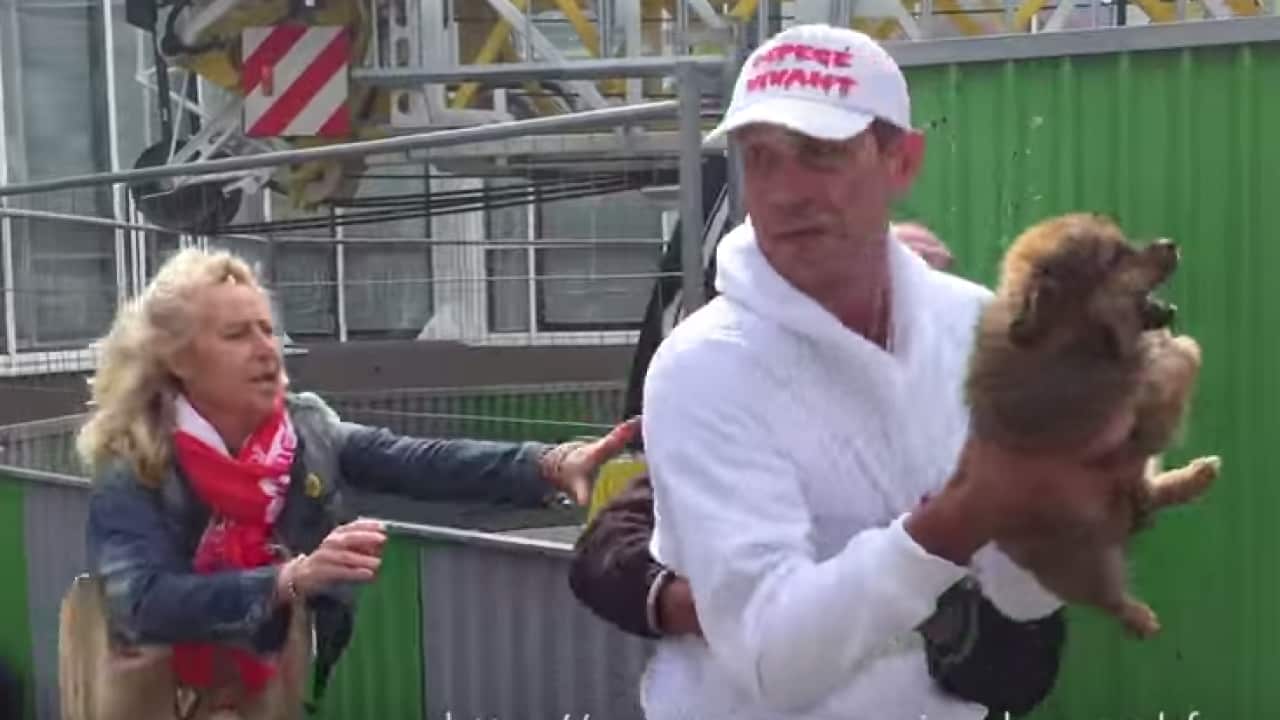 A screenshot of the video showing the puppy being removed Source: YouTube

A petition calling for the return of a puppy to its owner, a homeless man, has attracted tens of thousands of signatures.

The group
Cause Animale Nord
said it was acting to prevent “cruelty to animals” when it decided to separate the puppy from its owner.

The group said it had been prompted to intervene because it had the appearance of being drugged.

Advertisement
A video of the puppy’s removal has since been viewed more than 1.5 million times after it was posted to Facebook and YouTube five days ago.

The video shows a man from Cause Animale Nord wrestling with the homeless man as a woman attempts to take the puppy away.

The three grapple for possession of the puppy yelping in distress.

A third person swoops in and grabs the animal before running off.

Nghi Le Duc
posted
the video on his Facebook page, writing that the incident was violent and shocking.

“I was in shock when I saw this scene in Paris,” he wrote.

Witness Nghi Le Duc posted a video of puppy's removal on his Facebook page. It has been viewed more than 1.5 million times. Source: Facebook

“Three French who represent of the association ‘Cause Animale Nord’ and who also represent The Law… took violently, mercilessly, a small dog - a little friend of a homeless person from him, even though this homeless person cried and begged them!”

An
online petition
calling for a puppy to be returned to its homeless owner has attracted 46, 827 signatures.

The petition, posted by a user calling themselves en colère CITOYENS SOLIDAIRES France, said removing the animal was unjustified.

“Nowhere does it stipulate that it has the right to remove an animal without warning. That’s what they did by violently attacking a homeless person to remove his puppy around the Chatelet area of Paris,” the petition read.

“To justify this act of extreme violence, they allege that the homeless person is a Roma and that the animal was drugged, it hadn’t been vaccinated or had ID and was malnourished.”

Louise Chen said she signed the petition because she was sickened by watching the homeless man weep as the dog was torn from his arms.

“It is intolerable,” she wrote.

Others questioned the necessity of removing the puppy and then putting it up for adoption, questioning whether the puppy had been drugged at all.

"The video shows two so-called vigilantes, who steal the dog of a homeless person," Flamme Fiammeggi wrote under his signature on the petition.

"They are lying outrageously, saying that the dog was drugged and belonged to a Roma [a persecuted minority in France], while the video shows that the poor man is molested and that they steal a perfectly healthy dog.

"Drugged dogs are passive and do not react, but this dog was normal and well-maintained. They [activists] wanted to play like cowboys."

Responding to the backlash over the video, Cause Animale Nord rejected accusations it had stolen the puppy.

The president of the group, Antony Blanchard, said if state authorities had done their job than the group would not have been forced to do it instead.

“We know how important the presence of an animal is for people on the street. It is the only link they have with society. But we take this action to help. We can not condone the exploitation and abuse of animals for commercial ends,” he said in a
statement
posted on the group’s Facebook page.

Mr Blanchard said the group had decided to act after receiving a report from a member of the public that the dog appeared to be drugged. He said his own observations of the dog seemed to reinforce this.

He condemned the posting of the video of the puppy’s removal, saying it had not included the discussion the activists had had with the homeless man, asking him to show his registration papers for the puppy.