Hundreds of flood-related warnings have been issued by SES and the state government since the onset of the NSW floods, but are they reaching linguistically diverse communities? 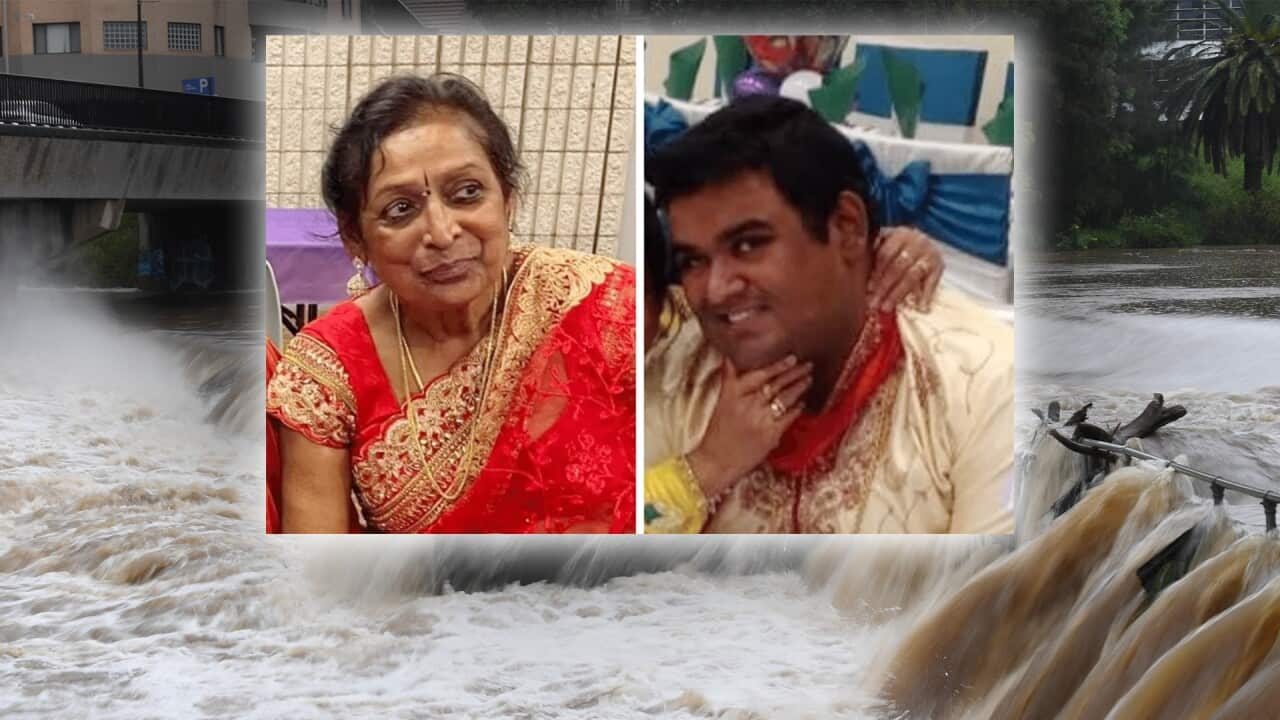 Hemalathasolhyr Satchithanantham (inset, left), along with the body of her son Bramooth (inset, right), was found in a flooded stormwater canal in western Sydney on Tuesday. Source: SBS, AAP

NSW State Emergency Service (SES) has issued more than 170 “warning products” since the onset of the NSW floods, and both news channels and social media have been saturated for days with flood-related alerts from the state government.

But three people from Sydney’s Culturally and Linguistically Diverse (CALD) communities have lost their lives in the floods and concerns are being raised about how effective these warnings are in reaching multicultural communities.

The bodies of 67-year-old Hemalathasolhyr Satchithanantham and her 34-year-old son Bramooth were discovered in a flooded stormwater canal in western Sydney on Tuesday morning.

Advertisement
A day later, NSW Police confirmed they found the body of Beverly Hills man Xianbin Liu in western Sydney floodwaters.
READ MORE
'Everywhere you look is carnage': Lismore residents blast federal government's flood response
While warnings asking people to stay off the roads were frequently issued by both SES and the state government, members of the CALD communities believe the messages often don’t reach their community members due to language barriers.

“When you look at western Sydney, there are a lot of elderly Sri Lankans and some of them are likely to have a language barrier,” Dr Thavaseelan said.

Ms Satchithanantham was the carer for her son, who had a number of medical conditions and was non-verbal.

The mother and son were reported missing on Monday when their car, a white Mazda 3, was found abandoned in an inundated stormwater canal in Wentworthville.
Hemalathasolhyr Satchithanantham and her son Bramooth.
NSW Police launched an investigation and called for public assistance on Monday afternoon to find the missing pair. But due to torrential rain their bodies weren’t discovered until the following day about a kilometre down the canal.

Ms Satchithanantham used to volunteer as a radio broadcaster for Sydney-based Australian Tamil Broadcasting Corporation, where she used to often bump into retired entomologist and fellow broadcaster Dr Victor Rajakulendran.

“She was a very kind-hearted, soft spoken lady. Everyone liked her and at the moment everyone is in shock,” Dr Rajakulendran told SBS News.

Dr Rajakulendran said while Ms Satchithanantham was multilingual and spoke English, many other elderly people of her age from Tamil background may not understand English well.
READ MORE
Scott Morrison says Australia 'getting harder to live in' during visit to flood-stricken areas of NSW
He said Tamil refugees and asylum seekers are also at a higher risk of facing these issues.

According to the 2016 census, more than 27,000 Tamil people — who were born in Sri Lanka — live in Australia, a number that's most likely risen in the past few years.

Dr Sithamparapillai says many of these people are not fluent in English.

“These are people who grew up in a war-torn country, without access to any education. And for them language is a big issue in Australia,” he said.

Dr Thavaseelan says a number of asylum seekers and refugees also suffer from mental health conditions that make them more vulnerable when such natural calamities unfold.

“When you look at their mental health status, they’re isolated from their families [back home]. A lot of them suffer from post-traumatic stress disorder. For many, mainstream news is not important. They don’t watch TV,” he said.

As water levels recede across the state, SES is readying itself for a review.

“We have what’s called an after-action review, where we debrief after these sorts of events,” SES NSW spokesperson Phil Campbell told SBS News.
Flooded Argyle Street at the Camden Bowling Club in Camden in Sydney on Tuesday 8 March 2022. Source: AAP / Dean Lewis
“The fact that we’ve had three deaths tragically from CALD communities and that increasingly we’re seeing people in at-risk situations from these communities [are things] we will look at very seriously during the after-action review process,” Mr Campbell said.

While SES offers generic information on its website in half a dozen other languages, such as simplified Chinese, Arabic, Korean, Vietnamese, Greek and Italian, Mr Campbell confirmed the website doesn’t have the resources to issue emergency alerts in those languages.

“But it’s definitely something we would love to be able to have the ability to do in the future,” he said.

Professor Shelton Peiris from the University of Sydney said sending out emergency alerts in a range of foreign languages will be effective in preventing such fatalities in the future.

In times of emergency, he said, the government should telecast these alerts in foreign languages on mainstream television channels.

“Many people I know don’t speak English, so [flashing emergency] information on TV would be an effective way to reach them,” he said.

“A lot of linguistically diverse people don’t necessarily watch TV or listen to radio, but most people have links with leaders in their community,” he said.

“And if the state government and SES develop ties with these community leaders, it would be much easier for them to reach the members."