'Are you incapable of shame?': Watch US diplomat Samantha Power attack Syria, Russia and Iran over Aleppo

US Ambassador to the United Nations Samantha Power has used a sitting of the Security Council to deliver a speech slamming the governments of Syria, Russia and Iran for what she called 'ghastly tactics' in their Aleppo offensive. 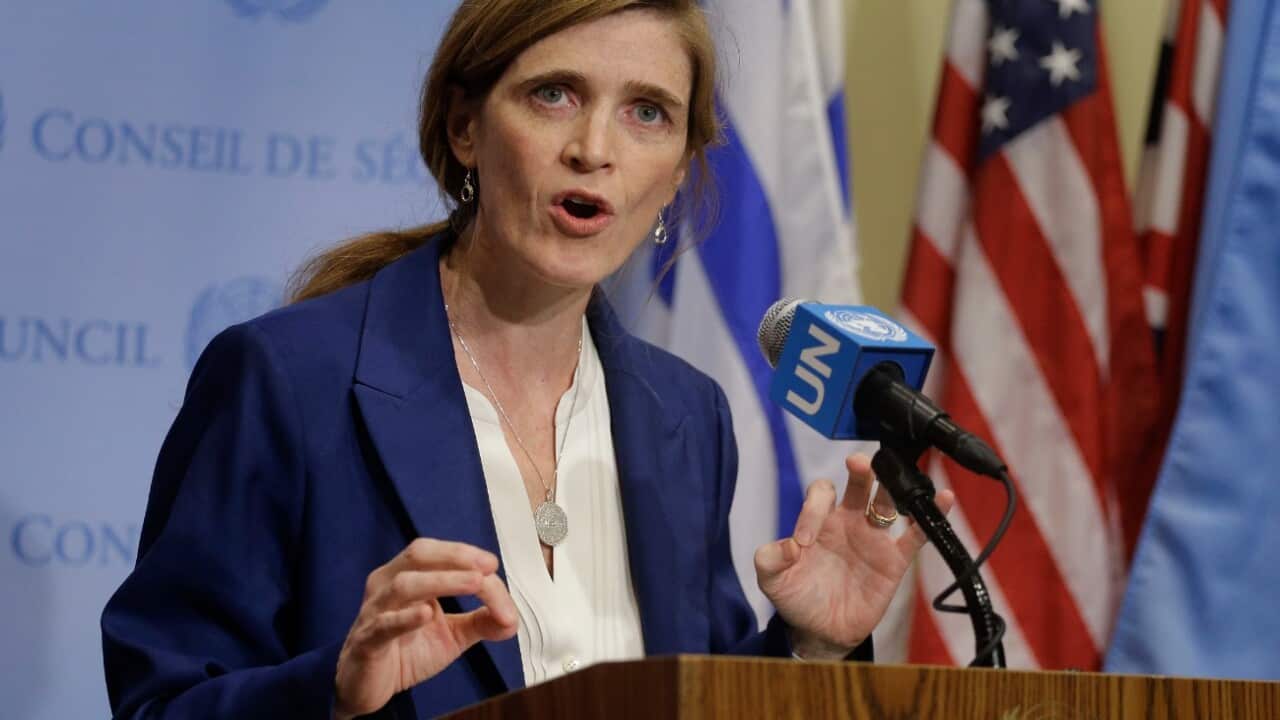 Samantha Power, US Ambassador to the UN Source: AAP

US Ambassador to the United Nations Samantha Power expressed her disgust in front of the 15-member Security Council, claiming the three countries showed "no mercy" to civilians in Aleppo, following reports on Wednesday that the besieged city had been recaptured by Syrian government forces.

The meeting in New York was called amid reports that civilians were being
targeted in the streets in Aleppo
and also following weeks of heavy aerial bombardment by the forces of Syrian President Bashar al-Assad, backed by Russian and Iranian forces.

Russian ambassador to the UN Vitaly Churkin shot back at Power after her speech, saying she delivered a statement "as if she was Mother Teresa".

Advertisement
“Please remember what country you're representing - remember your own country's track record and then you can start opining from the position of moral supremacy," Churkin said.

"Thank you. Here is what is happening right now in eastern Aleppo.

"Syrians trapped by the fighting are sending out their final appeals for help, or they are saying their goodbyes.

A doctor named Mohammad Abu Rajab left a voice message: 'This is a final distress call to the world. Save the lives of these children and women and old men. Save them. Nobody is left. You might not hear our voice after this.'

"A photographer named Ameen Al-Halabi wrote on Facebook: 'I am waiting to die or be captured by the Assad regime. Pray for me and always remember us.'

"A teacher named Abdulkafi Al-Hamdo said: 'I can tweet now but I might not do it forever. Please save my daughter’s life and others. This is a call from a father.'

"Another doctor told a journalist: 'Remember that there was a city called Aleppo that the world erased from the map and history.'

"To the members of this Council, and all Member States of the United Nations: Know that the ghastly tactics we are witnessing in Aleppo will not stop if the city falls."

"It is extremely hard to get information, of course, out of the small area still held by the opposition. You will hear this as an alibi, as a way of papering over what video testimony, phone calls, and others are bringing us live.

"You will hear this invoked – that it is hard to verify. It is deliberate. The Assad regime and Russia back by Iran using militia on the ground have done everything they can to cut off the city. So you will hear, 'well, we don’t really know, maybe it’s made up' – but they are hiding what is happening from the world.

"It would be easy for independent investigators to get in along with food, health workers, and others; but instead, the perpetrators are hiding their brutal assault from the world willfully.

"But consider the accounts that have made it out – so many of them – first responders describing children’s voices from beneath the rubble of collapsed buildings.

"There are no first responders or equipment left to dig them out, and no doctors left to treat them. Bodies lying in the streets of eastern Aleppo, but no one dares collect them, for fear of getting bombed or shot to death in the process.

"Up to a hundred children are reportedly trapped right now, in a building under heavy fire.

"You have to tell those responsible that they must stop."

"The regime of Bashar Al-Assad, Russia, Iran, and their affiliated militia are the ones responsible for what the UN called “a complete meltdown of humanity.” And they are showing no mercy. No mercy despite their territorial conquests – even now, no mercy.

"In the last 24 hours alone, pro-Assad forces reportedly killed at least 82 civilians, including 11 women and 13 children.

"These forces are reportedly entering homes and executing civilians on the spot, as we have heard. And according to the Office for the High Commissioner for Human Rights, foreign militias like Iraqi Harakat Al-Nujaba organisation are involved in these killings.

"Where civilians are able to run the gauntlet and make it across the frontlines, Syrian intelligence agencies are pulling people aside and sending them away, perhaps to be gang-pressed to the front lines, likely to the same prisons where we know the Assad regime tortures and executes those in its custody.

"In light of these reports, we join others, especially the secretary-general, in one of his final appeals, reiterating our call to the Assad regime and Russia to stop their assault on Aleppo, to protect civilians.

"We call on Russia and Assad to allow impartial, international observers into the city to oversee the safe evacuation of the people who wish to leave, but who justifiably fear that if they try, they will be shot in the street or carted off to one of Assad’s gulags.

"This isn’t the time for more equivocation, for self-censoring, for avoiding naming names, for diplomatic niceties of the kind that are so well-practiced here on the Council."

"The Assad regime and Russia appear dead set on seizing every last square inch of Aleppo by force, no matter how many innocent bodies pile up in their wake.

"But we keep insisting on answering the UN call for access, for safe and orderly evacuation, because we are not willing to accept that innocent men, women, and children can be butchered simply because they happen to live in a conflict area.

"Our shared humanity and security demands that certain rules of war hold, the most basic. And it is up to each and every one of us here to defend those rules.

"To the Assad regime, Russia, and Iran – three Member States behind the conquest of and carnage in Aleppo – you bear responsibility for these atrocities.

Related
Syria crisis: How you can help those in need

"By rejecting UN-ICRC evacuation efforts, you are signaling to those militia who are massacring innocents to keep doing what they are doing. Denying or obfuscating the facts – as you will do today – saying up is down, black is white, will not absolve you.

"The regime and its Russian allies will only be emboldened to replicate their starve-and-surrender-and-slaughter tactics elsewhere."

"Aleppo will join the ranks of those events in world history that define modern evil, that stain our conscience decades later. Halabja, Rwanda, Srebrenica, and, now, Aleppo.

"To the Assad regime, Russia, and Iran, your forces and proxies are carrying out these crimes. Your barrel bombs and mortars and airstrikes have allowed the militia in Aleppo to encircle tens of thousands of civilians in your ever-tightening noose. It is your noose.

"Three Member States of the UN contributing to a noose around civilians. It should shame you. Instead, by all appearances, it is emboldening you. You are plotting your next assault. Are you truly incapable of shame?

"Is there literally nothing that can shame you? Is there no act of barbarism against civilians, no execution of a child that gets under your skin, that just creeps you out a little bit? Is there nothing you will not lie about or justify?

Related reading
Syria crisis: How you can help those in need

"To the members of this Council, and all Member States of the United Nations: know that the ghastly tactics we are witnessing in Aleppo will not stop if the city falls.

"The regime and its Russian allies will only be emboldened to replicate their starve-and-surrender-and-slaughter tactics elsewhere. This will be their model for attempting to retake cities and towns across Syria. It will not end with Aleppo. And it will not focus on terrorists. It never has, and there is no evidence that it will.

"This is why it is so essential that each of us right here – no matter how small a country you are, no matter what your view of sovereignty, if you share our view that terrorism is one of the singular causes on earth worth fighting, it doesn’t matter – you have a responsibility to denounce these atrocities. We have just heard the Secretary-General state it plainly.

"You have to tell those responsible that they must stop. This isn’t the time for more equivocation, for self-censoring, for avoiding naming names, for diplomatic niceties of the kind that are so well-practiced here on the Council.

"Say who is responsible. Appeal to Moscow, to Damascus, to Tehran, that they have to stop. Use every channel you have – public, private, bankshot, through someone who knows someone. The lives of tens of thousands of Syrians still in eastern Aleppo – between 30,000-60,000 people – and hundreds of thousands more across the country who are besieged, depend on it.

Related reading
A 'meltdown of humanity' in Aleppo: UN
Aleppo governor to evacuate Twitter girl Bana Alabed: report
'We can do no more': rescue services in Aleppo plead for international help