Malaysia's prime minister warns the Rohingya crisis in Myanmar and Bangladesh could explode into a serious security threat for the southeast Asian region. 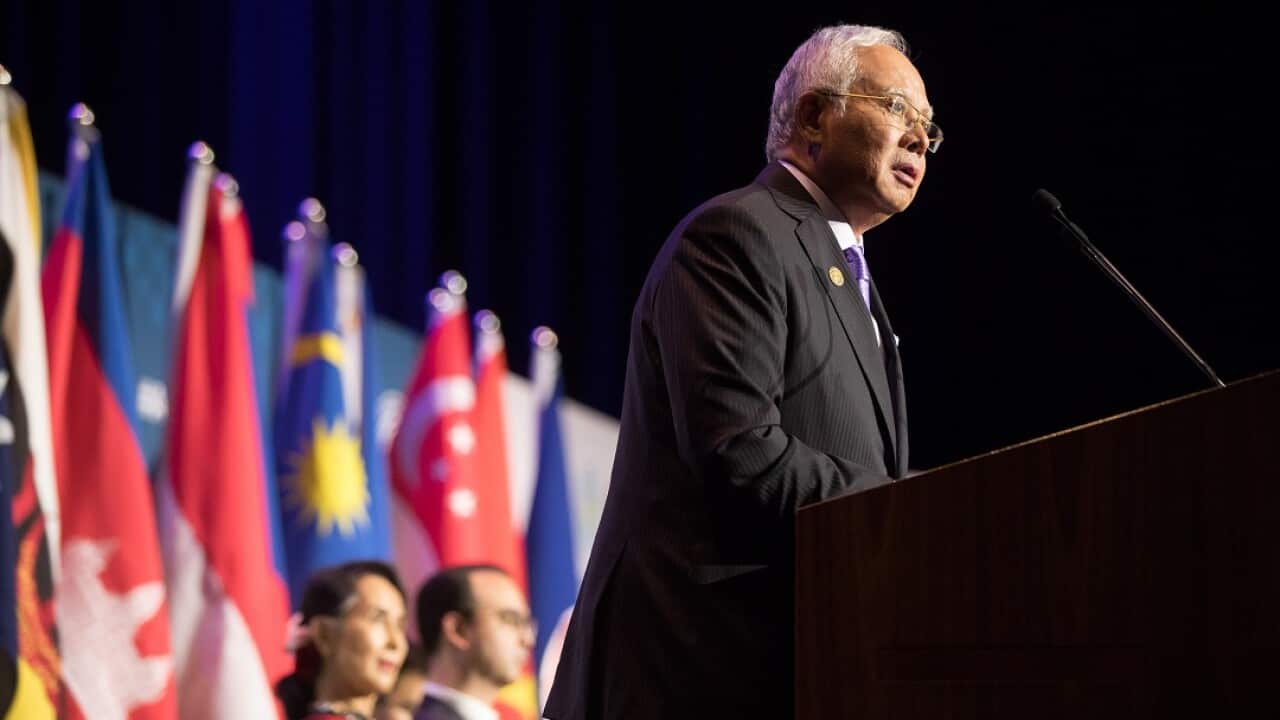 Islamic State militants could use the atrocities against the Rohingya people in Myanmar as a breeding ground for radicalisation, Malaysia's leader has warned.

Prime Minister Najib Razak told the Australian and Association of Southeast Asian Nation leaders summit in Sydney that the Rohingya crisis in Myanmar and Bangladesh could explode into a serious security threat for the region.

More than 700,000 Rohingya have already fled Myanmar's troubled Rakhine state for refugee camps in neighbouring Bangladesh since last August following a military crackdown in which villages were burned, women raped and babies murdered.

Advertisement
The United Nations has described the atrocities as a text book case of ethnic cleansing.

ASEAN has long been criticised for staying silent over the Rohingya crisis, which made Mr Najib's bluntness so extraordinary.

"Because of the suffering of Rohingya people and that of displacement around the region, the situation in Rakhine state and Myanmar can no longer be considered to be a purely domestic matter," Mr Najib said as Myanmar's de facto leader Aung San Suu Kyi watched on stoney faced.

He said thousands of despairing people who see no hope in the future could be a "fertile ground for radicalisation and recruitment by (Islamic State) and affiliated groups".

"The problem should not be looked at through the humanitarian prism only, because it has the potential of developing into a serious security threat to the region," Mr Najib, who's facing a corruption scandal at home, said.

Rohingya Muslim children, who crossed over from Myanmar into Bangladesh, wait for their turn to collect meals distributed by Turkish aid agency. Source: AAP

Prime Minister Malcolm Turnbull is under pressure to raise the Rohingya crisis when he has a bilateral meeting with Ms Suu Kyi on Monday.

He's been criticised by humanitarian groups for being too cautious in his language and not condemning the violence.

Mr Najib's warning came as the 10 ASEAN members and Australia signed off on plans to bolster counterterrorism cooperation.


Home Affairs Minister Peter Dutton singled out terrorists using the dark web and encrypted messages to plot attacks and recruit new members as a major security threat to the region.

"We kept the train on the tracks and of course it's now open for others to join," he said.

The pair urged business leaders to tap into the potential offered by southeast Asia's burgeoning middle class expected to surpass 160 million by 2030.

"Open your arms to opportunities and your neighbours," Mr Turnbull said.

Mr Widodo, who delivered a rare speech in English, joked about politicians having to compete with Netflix to grab voters' attention while making an underlying point about the digital revolution underway in southeast Asia.

Both leaders reflected on the huge infrastructure needs of the region and how Australian businesses could stand to benefit.

Over the next two decades, ASEAN countries will need around $4.3 trillion of infrastructure including bridges, highways, ports and railways.

The initiative will set up a knowledge bank of sustainable urban planning ideas to be shared between ASEAN countries and Australia.