At least three dead in suicide bombings near Uganda's parliament

Two explosions have rocked Uganda's capital Kampala, killing at least three civilians in what police described as a co-ordinated attack by extremists. 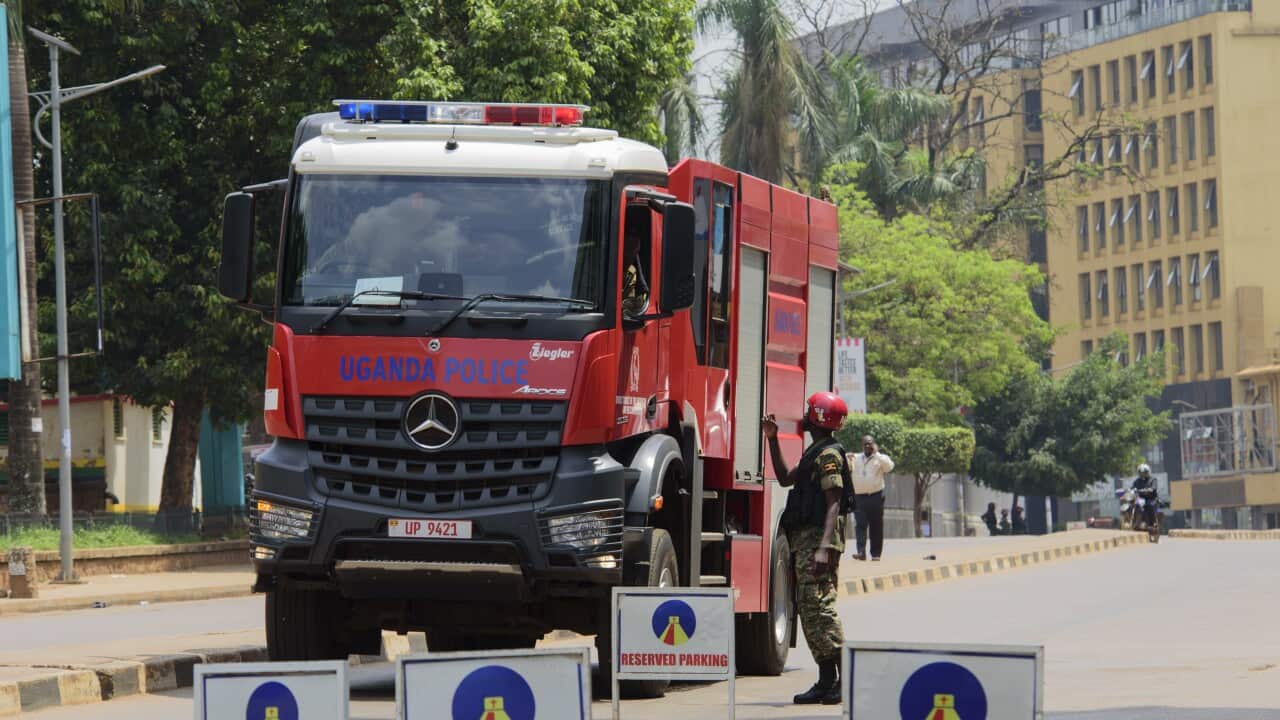 According to Ugandan Police, two blasts occurred near the Central Police Station and another near Parliament in the capital Kampala. Source: EPA

An armed group active in the eastern Democratic Republic of Congo, the ADF, has been linked to the so-called Islamic State by Washington and blamed for a string of recent attacks in Uganda.

Advertisement
The explosions in Kampala's central business district occurred within minutes of each other, shortly after 10 am, and left "bodies shattered and scattered", he said.

A general view of the damage after a blast near Parliament in Kampala, Uganda. Source: EPA

There was no immediate claim of responsibility but Mr Enanga told reporters: "The indications are that this is a domestic terror group linked to the ADF."

Police foiled a third attack, recovering an improvised explosive device from the home of an alleged suicide bomber who was shot and injured, and were in pursuit of other members of the group, Enanga added.

The explosion near the police station shattered windows while the one near parliament set cars parked nearby on fire, Uganda's Assistant Inspector General of police Edward Ochom told AFP earlier.

The Ugandan Red Cross said 21 of the 33 people injured were police officers.

The attacks follow two blasts last month, a bus explosion near Kampala that wounded many people and a bombing at a roadside eatery in the capital that killed one woman.

Police said both those explosions were carried out by the ADF. Uganda has also blamed the group for a foiled bomb attack in August on the funeral of an army commander who led a major offensive against Al-Shabaab militants in Somalia.

Salim Uhuru, mayor of Kampala Central, said he was near the police station when he heard the blast.

"It was so loud. I ran towards the police station and saw one policeman I know dead on the ground. His body was scattered like mincemeat," Mr Uhuru said.

A police officer walks behind a sniffer dog as it searches a street near the scene of a blast in downtown Kampala, Uganda. Source: AP

"The road to parliament is closed off, there are people just crying, everyone else is just trying to get away from these areas," he said.

Parliament cancelled its Tuesday session, asking members to avoid the area "as security forces are working hard to restore order".

The premises were put under tight security, with heavily armed soldiers securing the area as forensics officers in white overalls inspected the blast site for clues.

Opposition leader Bobi Wine, whose real name is Robert Kyagulanyi, said he was "very sad" about the bombings, which were also condemned by the African Union.

Ugandan police last month arrested a number of alleged ADF operatives and warned that extremists were believed to be plotting a new attack on "major installations".

"Today's breakthrough attacks show that we still need to do more, to pre-empt, penetrate and prevent deadly attacks by domestic extremists in the days to come," police spokesman Mr Enanga said.

The ADF, historically a Ugandan rebel group, has been accused of killing thousands of civilians in eastern DRC.

"It's increasingly clear that the ADF is refocusing its attention on Uganda," said Kristof Titeca, an academic at the University of Antwerp and an expert on the shadowy group.

"It may link with an increased influence of jihadist elements within the ADF in the last couple of years," he said.

In April 2019, IS began to claim some ADF attacks on social media, presenting the group as its regional branch -- the Islamic State Central Africa Province, or ISCAP.

In March this year the United States officially linked the ADF to IS.

The ADF is considered by experts to be the bloodiest of more than 120 armed groups that roam eastern DRC, many of them a legacy of two regional wars a quarter of a century ago.

The attack was seen as revenge for Uganda sending troops to Somalia as part of an African Union mission to confront Al-Shabaab.