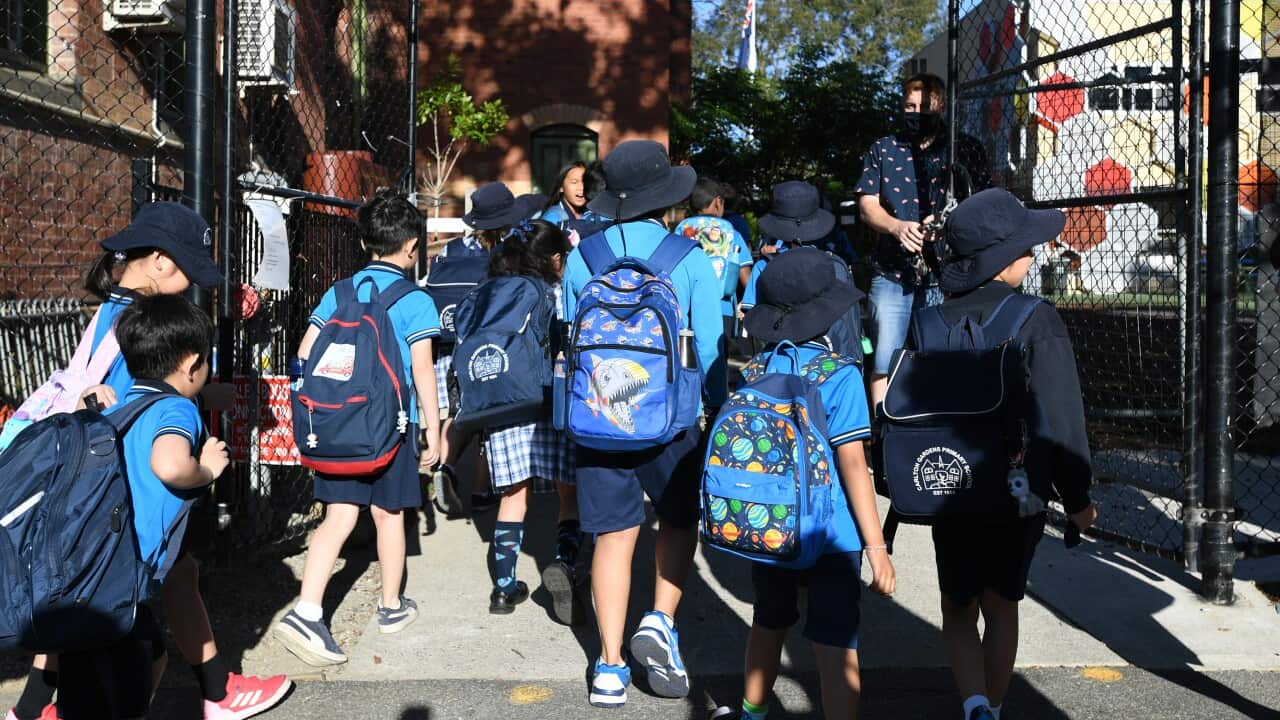 States and territories are putting together a plan to open schools safely, which is set to be released on Thursday. Source: AAP

The Omicron wave is likely to exacerbate Australia’s
existing teacher shortages
and demanding workloads. As school starts at the end of January and beginning of February across the country, many teachers will be at risk of contracting COVID. They will need to stay away from work, while others may choose to leave the profession altogether.

To address parental concerns about teacher absences, the prime minister recently announced teachers
will no longer be required
to isolate at home for seven days if they are close contacts, and if they don’t have symptoms and return a negative rapid antigen test. But unions have slammed this relaxation of rules saying it
will only add to safety concerns
for teachers and children.

States and territories are putting together a plan to open schools safely, which is set to be
released on Thursday
. But for schools to operate effectively, and avoid remote learning, Australia must also have a long-term plan for recruiting and retaining teachers. This means lifting their professional status, improving work conditions and increasing pay.

Other countries are seeing
Omicron-fuelled teacher shortages
. In
England
teachers have been
told to combine classes due to staff shortages
.

In
Canada
some provinces had to delay opening schools. In
Ontario
families who were previously notified when a teacher or child in their class tested positive will now only be notified when more than 30 per cent of staff and students are absent.

In
France
teachers have gone on strike over what are described as “
chaotic conditions
”.

Schools in the United States, like in Australia, suffered from pre-pandemic teacher shortages and have struggled to stay open during the pandemic. Some states have
recruited parents as stop-gap
substitute teachers, others
returned to remote learning
.

Research in the US has made it clear the pandemic has
changed teachers’ committment to remaining in the classroom
and led to
high staff turnover
. Australians may find themselves in the same position.

Australia’s
teachers suffer from poor professional status
. A lack of respect, problems with recruitment,
poor pay
(relative to other professions),
high workload
, conflicting demands and now the pandemic, have conspired to create a perfect storm.

A range of data and reports suggest the scale of the emerging teacher shortage will be serious. Low
completion rates of teacher degrees
(fewer than 60 per cent of those who started the degree) alongside
rising child and youth demographic trends
mean many schools, particularly those in rural areas, will find things even more difficult over the next few years.

Reports from the New South Wales education department, accessed by the NSW Teachers Federation, show
more than 1,100
full time secondary and special education teaching positions were unfilled in 2021. That’s a lot of classrooms without a teacher.

The
documents also reportedly say
the state’s public schools will “run out of teachers in the next five years”. Meanwhile, states
struggled to find casual and relief teachers
to fill the pandemic exacerbated shortages in the past two years.

Projections
based on 2020 student enrolments, student to teacher ratio and school population growth suggest between 11,000 and 13,000 new teachers will be needed in NSW by 2031.

Nationally we have seen a chronic shortage in maths and science teachers. With the Australian Teacher Workforce Data Project still in development phase after ten years there has been no systemic national tracking of generic or specialist shortages. The
Australian Mathematics and Science Institute
calculates there is a 76 per cent chance every student will have at least one unqualified maths teacher in years 7 to 10.

Long-term toleration of the teacher shortages in maths and science is particularly surprising as these
learning areas are critical to our economy
. There are also well documented
declines in senior students taking these subjects
, suggesting we are already paying the price for this neglect.

There has been no government reporting on the number of schools unable to meet their staff needs in 2021. But a number of social media reports have shown industrial action in individual schools where the remaining teachers were unable to maintain classes.

We need a national plan

A large volume of research documents the
high and increasing workload of Australian teachers
. In NSW, before the pandemic,
teachers reported working
an average of 55 hours per week and principals an average of 62. With the
pandemic increasing teacher workload
, short staffing in schools will ratchet that up another notch.

Unlike many countries, including
England
, Australia
doesn’t have a strategic plan
to recruit and retain teachers.

The NSW Teachers Federation commissioned an independent inquiry in 2020 into the work of teachers and principals, and how it’s changed since 2004. After reviewing international evidence and local data, the
final report
made a range of recommendations to “recognise the increase in skills and responsibilities, help overcome shortages and recruit the additional teachers needed to cope with enrolment growth”.

Australia urgently needs a coordinated, long-term, politically bipartisan plan to strengthen teacher recruitment, placement and retention. With such a plan in hand we will be better positioned to tackle the ongoing pandemic and whatever other crises we face in the future.

Rachel Wilson is an associate professor in education at the University of Sydney.

Giuseppe Carabetta is a senior lecturer at the University of Sydney's business school.