Australia is recruiting more students from Latin America than ever before

Latin America is emerging as the fastest-growing region for international enrollments, but while private training providers are leading the way, those in the sector say universities have more work to do. 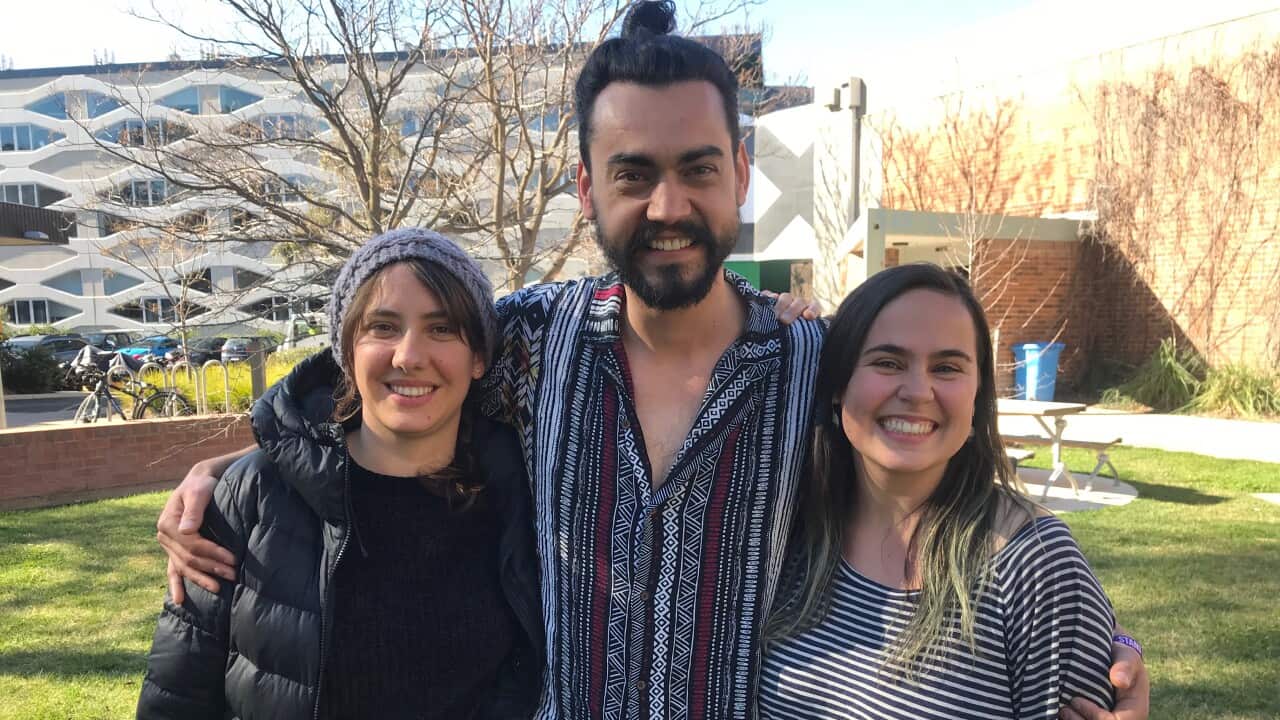 “I study the behaviour of kangaroos,” the 27-year-old told SBS News.

“Ultimately, I’ll look at the many different aspects of behaviour and see if that affects reproduction and survival.”

Advertisement
Weli spent some time in Brisbane in 2013 learning English, supported by a Brazilian government scholarship program. So when it came time to choose a destination to continue his studies overseas, he deliberately chose a subject that would allow him to return to Australia.

“I knew that Australia had good programs for international students so I started applying for Australia and I really wanted to study social mammals - the obvious choice in Australia was eastern grey kangaroos.”

He is now one of thousands who have flocked to Australia, originally encouraged by the now-defunct scholarship scheme, and now studies at the Australian National University in Canberra.

In just four years to 2017, the number of Latin Americans studying in Australia almost doubled, making it the fastest-growing source of international students, albeit from a low base.

Brazil is the largest market in the region with more than 40,000 Brazilians studying in Australia, making the country the fourth-biggest supplier of students in 2018, after China, India and Nepal.

Its neighbour Colombia has also risen up the ranks from 11th to become the ninth-biggest market after a 21 per cent increase.

There was also rapid growth in enrollments from Chile, up 27 per cent on 2017, with Argentina surging by 25 per cent.

While China maintains its dominance - accounting for more than a third of the $32.4 billion international education market - its growth has slowed and even dropped one per cent in the first half of this year.

International Education Association CEO Phil Honeywood said few in the sector would have predicted Brazil and Colombia would be in the top 10 source countries.

He attributes the growth to the Brazilian government-funded Science Without Borders scholarship that sent about 100,000 students abroad between 2011 and 2015.

“What that did is it brought for the first time many young people to Australia, and by word of mouth, word went back to Latin America that Australia was a great place to study, a great place to have a great time,” he said.

The scholarship program reflected the region’s push to ensure the next generation can speak English to capitalise on trade opportunities.

“As part of their internationalisation of education endeavour they actually want more English language embedded in their young population,” Mr Honeywood said.

But after economic troubles forced the Brazilian government to scrap the scholarship program in 2017, Australia’s higher education sector is investigating in ways to maintain the growth from the region.

A government-appointed working group, comprising representatives from education and training institutes and the research and business sectors, has been tasked with developing a strategy for engagement in the region.

Criticism about an over-reliance on Chinese students has added a greater sense of urgency to their efforts with many now eyeing off the potential of the region as a way to diversify their international student enrollments.

In its December report, it recommended additional investment in marketing, the development of partnerships between Australian and institutions in the region, and creating niche courses to suit industry needs in targeted countries.

So far, the biggest beneficiaries of the Latin American student boom have been private English language training providers.

“What we’ve seen is many of those countries offshore are seeing English language as a key driver of their own economic development,” English Australia CEO Brett Blacker said.

The challenge is to encourage those people to pursue further study in Australia.

More than half of the 50,000 Latin American students who came to Australia in 2017 were enrolled in English-language courses.

Mr Honeywood said forming research partnerships and offering training in specialised areas such as dryland agriculture would appeal to potential students from Argentina.

“If Australian universities are to diversify and gain Latin American student enrolments they really have to focus on niche courses,” he said.

The CSIRO already has 23 research projects in Chile related to key industries of mining, aquaculture and water management.

For Weli and some of his fellow PhD students in Canberra, Australia was an obvious choice.

Biologist Connie Leon came to Australia from Chile with her husband in 2013. She is now studying birds, while her husband studies reptiles.

“We came to Australia because we like animals,” she said.

It was a similar story for Jessica Fenker who is doing her PhD on the ecology, evolution and conservation of lizards.

“Australia has the highest diversity of lizards so it’s kind of the obvious choice,” she said.

It may be far from her home in Brazil, but the quality of research and education at ANU and the social campus life, she says, have helped.

Along with Weli, the group of friends were also drawn to the Australian lifestyle.

“You guys really like to go out for hiking and really enjoy the nature and this is the sort of thing I like,” Jessica said.

“Also it’s a safe place; the security is a really big issue in Brazil so it’s really nice to walk around without worrying.”

A survey of more than 4,200 Latin American students, commissioned by the working group, found Australian education providers’ main competitors were Canada and the US.

The main deterrent for students considering Australia was its distance from their home country, high living costs and expensive course fees.

Universities are also being urged to offer more scholarships to overcome the major barrier of the cost of an education in Australia.

“It’s really a price point; if they’re having to pay for accommodation while they’re here plus around $35,000 a year in tuition fees they’re going to vote with their feet,” Mr Honeywood said.

While Brazil and Colombia account for the majority of students in Australia from the region, English Australia CEO Brett Blacker said there was more potential to grow the numbers from Argentina, Peru and Mexico.

“There is still a lot of opportunity for us to grow our profile in the region and for more students to undertake study in Australia.”

He said that will take greater engagement on the ground.

Few Australian providers have representatives on the ground in the Latin American region, relying on education agents and government department activities.

The Austrade Americas team - departmental officials who look to increase foreign investment in Australia - has recently launched a digital advertising campaign on Facebook and Instagram to attract more students from Latin America.