64 leaders from around the world have signed the pledge to reverse nature loss, but Australia, China and the United States are not on board. 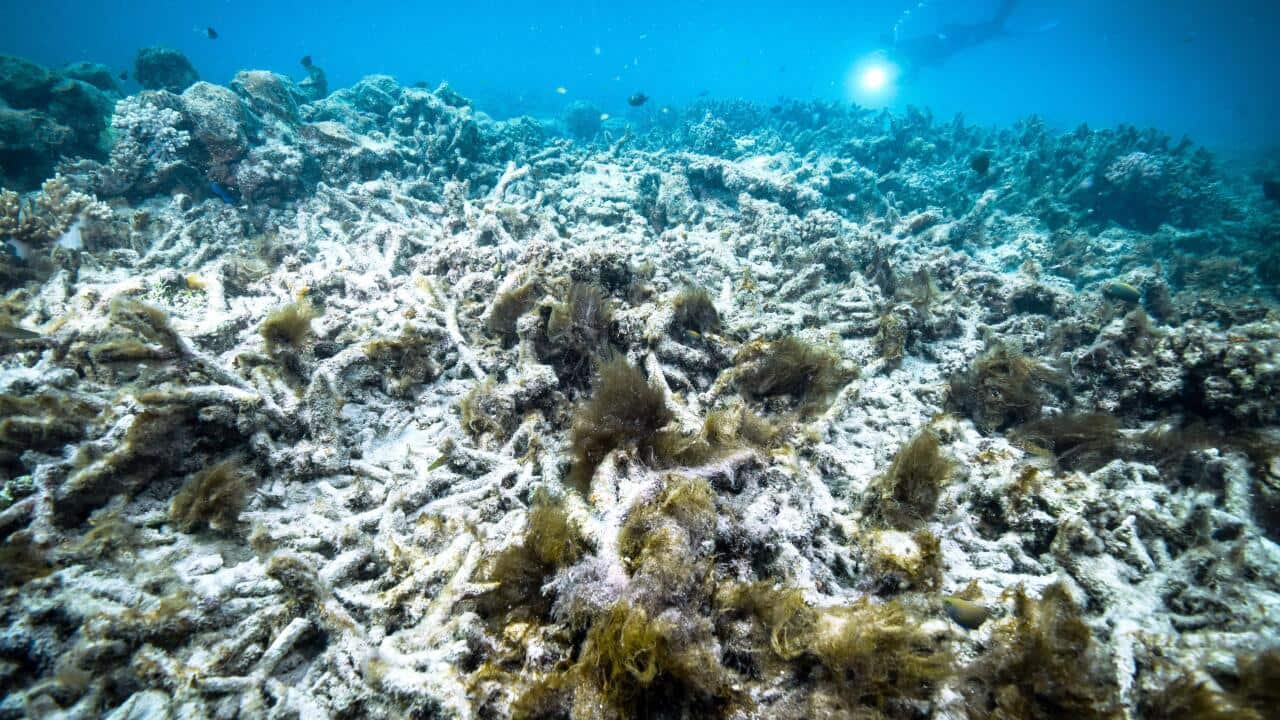 Coral bleaching at the Great Barrier Reef in Australia, a World Heritage Site in 2016. Source: AAP

Ahead of the UN Biodiversity Summit this week, 64 heads of state and government promised to slash air pollution, eliminate ocean plastic and transition to more sustainable food systems by 2030.

But the Morrison government has not signed up to the pledge, joining the United States, Brazil, China, Russia, Indonesia and India in snubbing the proposal.

Advertisement
A spokesperson for the Prime Minister told SBS News the Federal Government had already agreed to "ambitious and achievable" goals under the Paris Climate Agreement and is aiming to reach net-zero carbon emissions "as soon as possible."

"We will not agree to other targets unless we can tell the Australian people what they will cost to achieve, and how we will achieve it," the spokesperson said.

The Prime Minister's Office also told SBS News the government is investing
$18 billion in green energy by 2030 as part of its technology investment roadmap
.

Signatories to the Leaders' Pledge for Nature said nature loss was wreaking "irreversible harm" to life on Earth, aggravating inequality and contributing to climate change while increasing the future risk of pandemics such as COVID-19.

Nations including Germany, France, Britain and Mexico have promised to develop an "ambitious" plan ahead of next year's UN COP15 Biodiversity Conference in Kunming, China.

"We must act now – right now. We cannot afford dither and delay because biodiversity loss is happening today and it is happening at a frightening rate,” British Prime Minister Boris Johnson said.

“Left unchecked, the consequences will be catastrophic for us all."

"Extinction is forever – so our action must be immediate."


These actions would include ending "harmful" subsidies for fossil fuel and boosting spending for restoring wild spaces such as forests and wetlands as well as retooling global farming systems to reduce forest loss and food waste.

Currently one-third of food produced, around 1.3 billion tonnes, is lost or wasted each year.

The WWF's biennial Living Planet Index, released separately this month, showed that wild populations of animals, birds, fish and plants had plummeted nearly 70 per cent since 1970.

"Nature and biodiversity loss is so severe that it poses grave risks to our health, economy and livelihoods," said WWF International director general Marco Lambertini.

"We can't ignore it any longer, and we must act decisively."

'This is not a future I want': Thousands of students lead climate strikes to protest against gas projects

The pledge comes just two weeks after the UN's periodic review of existing global conservation plans found that nations were set to miss all 20 targets, they set themselves back in 2010 to halt nature loss.

"Two major reports published this month conclude we are utterly failing to protect the diversity of life on Earth," said Johan Rockstrom, director of the Potsdam Institute for Climate Impact Research and co-chair of the international Earth Commission.

Campaigners are hoping for a Paris-style agreement for protecting nature to be adopted next year, with nations agreeing a global framework to halt and reverse biodiversity loss.