Prime Minister Scott Morrison has announced more than $550 million in aid initiatives for Southeast Asia during the first ever online ASEAN-Australia summit. 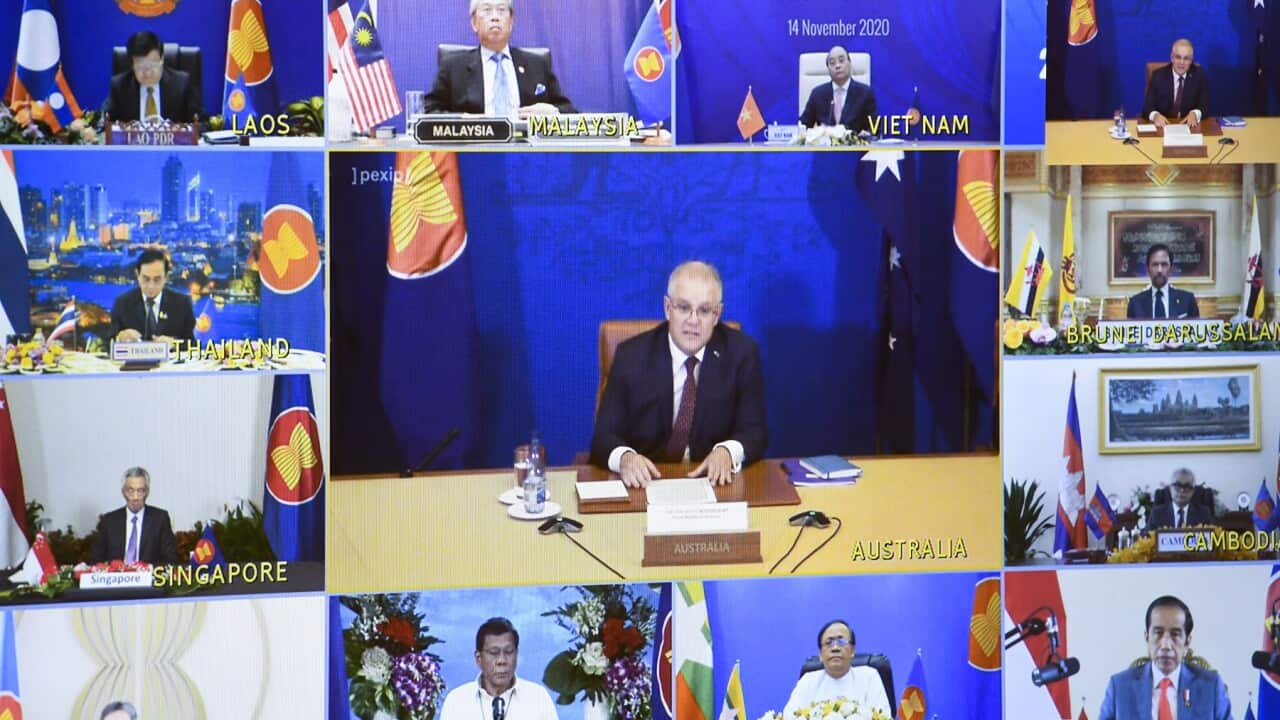 Australian Prime Minister Scott Morrison has announced more than $500 million in additional aid funding for Southeast Asia during an address to leaders at the ASEAN-Australia summit that is being held online for the first time due to the pandemic.

Mr Morrison said as part of a
recently announced COVID-19 aid package
for the region, there would be $21 million for the newly launched ASEAN Regional Center On Public Health Emergencies And Emerging Diseases.

Mr Morrison said equitable access to vaccines is critical to a strong post-pandemic recovery for everyone in the region.

"Equitable access to safe, effective and affordable vaccines for COVID-19 will be the central factor in our collective recovery," he told leaders.

"The support that this [assistance] provides gives us all new choices based on health and science - and reflects our shared state in your recovery."

He commended the assembled leaders on their efforts to tackle COVID-19 in their countries, saying he looked forward to hearing in more detail about their different approaches to overcoming the challenges.

"COVID has changed much, as we know. But ASEAN remains united as always and Australia's commitment to a region of sovereign, independent states, resilient to coercion, remains absolutely steadfast."

He also announced additional funding of $70 million for building resiliency and recovery in the region.

"As a long supporter of ASEAN integration, Australia has been working with you to close the development gap," Mr Morrison said.

An extra $232 million was announced for the Mekong, covering the areas of the environment, cyber and critical technologies and scholarships.

"It goes to what Australia brings to ASEAN - a constructive approach, options, balance and deep friendship.

"This is what we do as neighbours, and as strategic partners."

Opposition spokesperson for foreign affairs Penny Wong said the announcements fail to make up for years of neglect.

"After seven years of failing to deliver in our region we finally get yet another announcement from Scott Morrison," Senator Wong said.

"Under Scott Morrison what we've seen is a Southeast Asian step down, which he's now trying to cover up.

"It's beyond time for Mr Morrison to step up to the plate, to deliver stronger relationships in our region so Australia doesn't get left behind."


Aid agency Oxfam Australia welcomed the additional funding, with the group's chief executive Lyn Morgain saying she looked forward to seeing the details of the allocation.

"The Prime Minister's focus on health systems and economic resilience is critical at this time, as our neighbours face deepening poverty and inequality."

"Oxfam has estimated an additional half a billion people could be pushed into poverty by the impacts of this pandemic, including almost 240 million people in East Asia and the Pacific, and close to 130 million in South Asia."

Mr Morrison's address marks Australia's first engagement with this year's virtual summit of the Association of Southeast Asian Nations hosted by Vietnam, which began on Thursday,

The prime minister will also take part in the related East Asia Summit later on Saturday and on Sunday he will be one of the signatories of the Regional Comprehensive Economic Partnership - a treaty creating the world's largest economic alliance.

RCEP partner countries account for 58 per cent of Australia's trade and 66 per cent of exports.

While Australia, Japan, China, South Korea, the 10 members of ASEAN and New Zealand will be part of the deal, a clause will allow India to join later.

Benefits expected include better access into the region for exports of services such as telecommunications, professional and financial services, improved ways to tackle non-tariff barriers such as customs procedures, quarantine and technical standards and greater investment certainty for businesses.

As well there are expected to be improved rules on e-commerce to make it easier for businesses to trade online and a common set of rules on intellectual property.

Mr Morrison said ASEAN was more important than ever as the region dealt with the health and economic challenges of COVID-19.

"We strongly support - as I have said on many occasions to you - the ASEAN outlook for the Indo-Pacific. And we remain committed to working with the region, and helping the region to recover from COVID-19.

"It matters to us. And we're very committed to it."