Australia spent $13 million on this security post in the Torres Strait. A year on, it's still empty

Fifteen months after it was expected to be finished and amid a multi-operation bid to stop COVID-19 entering the Torres Strait, the Saibai Community Safety and Security Facility is still sitting unused. 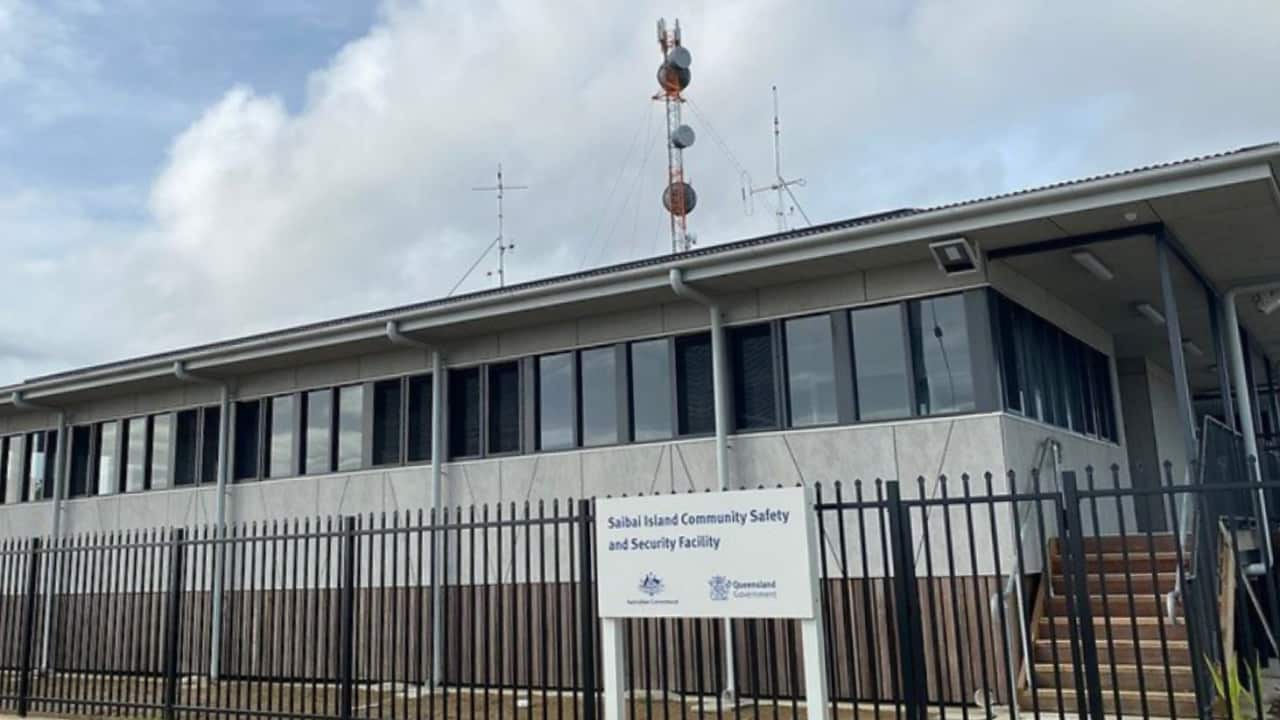 The Saibai Community Safety and Security Facility is yet to open Source: SBS

A new $13 million high-tech security post to guard Australia’s international border with Papua New Guinea is still standing idle, more than a year after it was due finished.

The facility on Queensland's Saibai island, four kilometres from the Papua New Guinea coast, was funded in 2018 by the Department of Prime Minister and Cabinet with an Indigenous Advancement Stategy grant, set to be built by the Queensland government.

But 15 months after it was expected to be completed, none of the Australian Defence Force, Australian Federal Police, Queensland Police or Australian Border Force personnel on Saibai have had use of the new building.

Advertisement
Delays have been blamed on the area's location, weather and COVID-19 restrictions.

Commander Colin Drysdale leads Operation Overarch - the ABF initiative that shut the border in March last year to stop the pandemic crossing between Australia and PNG - and visited the Saibai Community Safety and Security Facility (CSSF) earlier this month.

An aerial shot of the Saibai Community Safety and Security Facility Source: SBS

“It's a fantastic facility. I saw it at the lock-up stage and it's an amazing piece of, state of the art, facility up there.”

The CSSF boasts a major incident room, holding cells, and an accommodation block for federal and state agencies to share.

“Of course everything would be useful in a perfect world however, there are certain things, certain processes that have to be undertaken and Queensland government are in charge of the facility,” Commander Drysdale said.

“They actually own it, and we will be sharing with them.”

In a statement, the Department of Home Affairs told SBS News questions around the operationalisation of the facility were "best put" to Queensland Police, and delays related to “Indigenous Land Use negotiations and, more recently, COVID-19 bio-security restrictions”.

A Queensland Police spokesperson said the facility was finished in recent weeks but it has not yet got a commencement date for operational activities.


The spokesperson said "several unforeseeable events" have resulted in the delay.

"The remote nature of Saibai and the many weather events that affect the Torres Strait, coupled with COVID-19 restrictions introduced in 2020 meant the projected completion date was not met,” they said.

So far, COVID-19 has not entered Australia through the Torres Strait.

Keeping watch on the border from an army tent just down the road from the CSSF is local ABF border monitoring force officer, Patricia Mooka.

“On Saibai, the presence of agencies here is very important,” she said.

“The main focus is to keep the community safe and keep the Australian border safe.”

Up to 1,500 villagers from PNG’s South Fly region still crossed the border in the last 12 months, a 90 per cent annual reduction, according to Commander Drysdale, with many seeking medical treatment at clinics in the Torres Strait for non-COVID-19 conditions.

While 65 per cent of Saibai’s population has been fully immunised for COVID-19, over in the South Fly, the vaccine rollout is only very slowly happening and the virus has been detected in nearby communities.

Indigenous communities such as Saibai are classified as highly vulnerable to COVID-19.

Tess Newton Cain, of Griffith University’s Pacific Hub, said it was disheartening the CSSF is not up and running yet.

She said all resources available to the facility should be used to protect the Torres Strait and wider Australian community.

“Once it’s up and running we’d hope it would make a positive contribution but it's certainly disappointing it hasn’t been available for the last 15 months,” Dr Newton Cain said.

“What we need to know is that this resource, which I understand the community has been advocating for for quite some time, is really focused on what their security concerns are and their safety concerns.”