A Ukrainian-Australian community group has called on the federal government to impose sanctions on Ukrainian government officials to try and resolve the political crisis in the European nation. 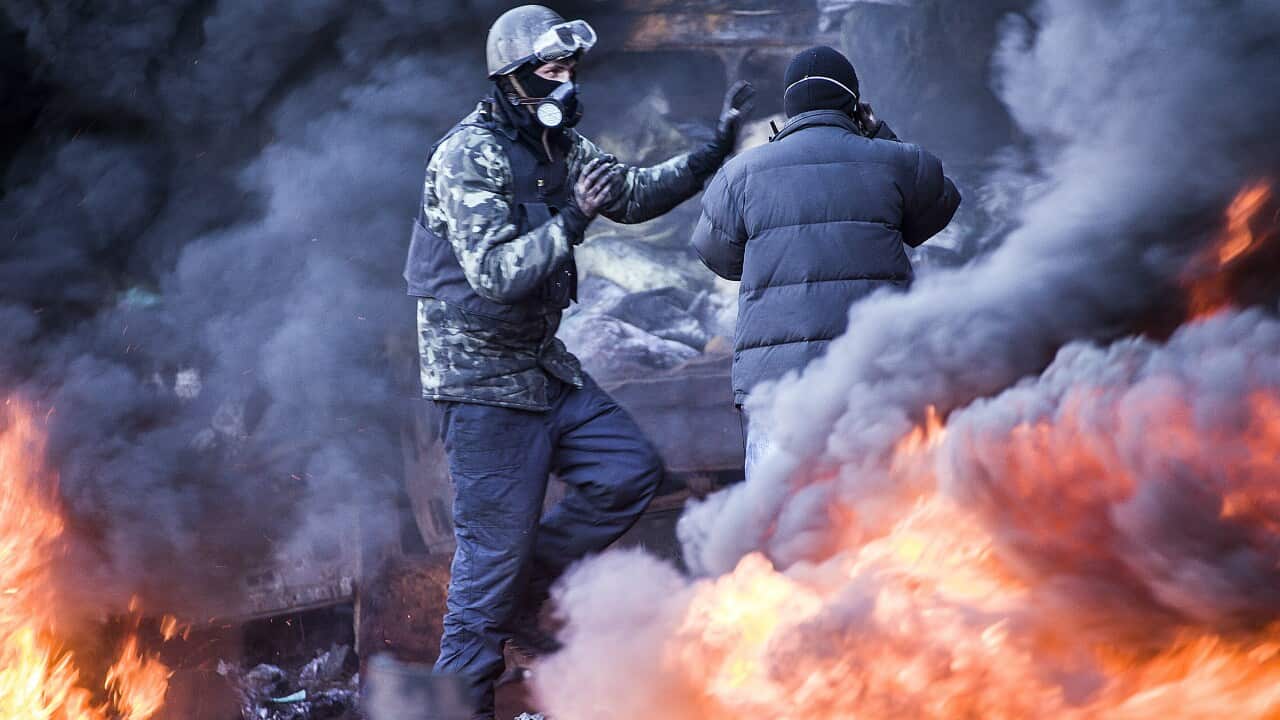 The call comes after at least 18 people were killed in the latest clashes between protesters and riot police in the capital Kiev in the bloodiest outburst of violence in Ukraine over the past three months.

Kiev has been wracked by anti-government protests since President Victor Yanukovch rejected a European Union pact last November in favour of closer ties with Russia.

The Chairman of the Australian Federation of Ukrainian Organisations, Stefan Romaniw believes the best way to resolve the conflict now lies in imposing targeted sanctions on Ukrainian officials, and Australia should help with that.

"Secondly, looking at assets that people like President Yanukovch's son and other oligarchs have around the world- freezing those assets and doing an international audit if those assets are seen as laundered money and for those assets to be confiscated- that's the only language that they really understand."

The police, who have been engaged in a bloody hours-long standoff with the protesters, took up position around a monument in the centre of the square shortly after 4:00am (0200 GMT).

Flames have engulfed the last remaining opposition stronghold on Kiev's Independence Square as police pressed on with their ferocious assault to clear the protest camp.

Earlier, thousands of riot police armed with stun grenades and water cannons attacked the sprawling protest camp in the centre of Kiev on Tuesday, following a day of street battles that left 18 people dead.

The estimated number of injuries climbed to more than 1000, or double previous estimates, according to the medical professor Olga Bogomolez on an opposition broadcast.

She said clinics were overwhelmed in handling the deluge of injuries.

The violence was the deadliest in nearly three months of anti-government protests that have paralysed Ukraine's capital in a struggle over the country's identity.

With the boom of exploding stun grenades and fireworks nearly drowning out his words at times, opposition leader Vitali Klitschko urged the 20,000 protesters to defend the camp on Independence Square that has been the heart of the protests.

"We will not go anywhere from here," Klitschko told the crowd, speaking from a stage in the square as tents and tyres burned around him, releasing huge plumes of smoke.

"This is an island of freedom and we will defend it," he said.

Many heeded his call.

"This looks like a war against one's own people," said Dmytro Shulko, 35, who was heading toward the camp armed with a fire bomb.

"But we will defend ourselves."

As police dismantled some of the barricades on the perimeter of the square and tried to push away the protesters, they fought back with rocks, bats and fire bombs.

Against the backdrop of a soaring monument to Ukraine's independence, protesters fed the burning flames with tyres, creating walls of fire to prevent police from advancing.

Speaking over loudspeakers, police urged women and children to leave the square because an "anti-terrorist" operation was underway.

The protesters appeared to sense that Ukraine's political standoff was reaching a critical turning point.

As the tents and also some tyres went up in flames, defiant protesters shouted "Glory to Ukraine!" and sang the Ukrainian national anthem.

Shortly before midnight, Klitschko headed to President Viktor Yanukovych's office to try to resolve the crisis, his spokeswoman said.

Earlier in the day, protesters attacked police lines and set fires outside parliament, accusing Yanukovych of once again ignoring their demands and dragging his feet on a constitutional reform to limit presidential powers.

Tensions had soared after Russian officials said on Monday that they were ready to resume providing the loans that Yanukovych's government needs to keep Ukraine's ailing economy afloat.

This raised fears among the opposition that Yanukovych had made a deal with Moscow to stand firm against the protesters and would choose a Russian-leaning loyalist to be his new prime minister.