Australia's Department of Foreign Affairs and Trade says officials have raised issues of due legal process and access to proper medical care for Julian Assange with officials in the UK and the US. 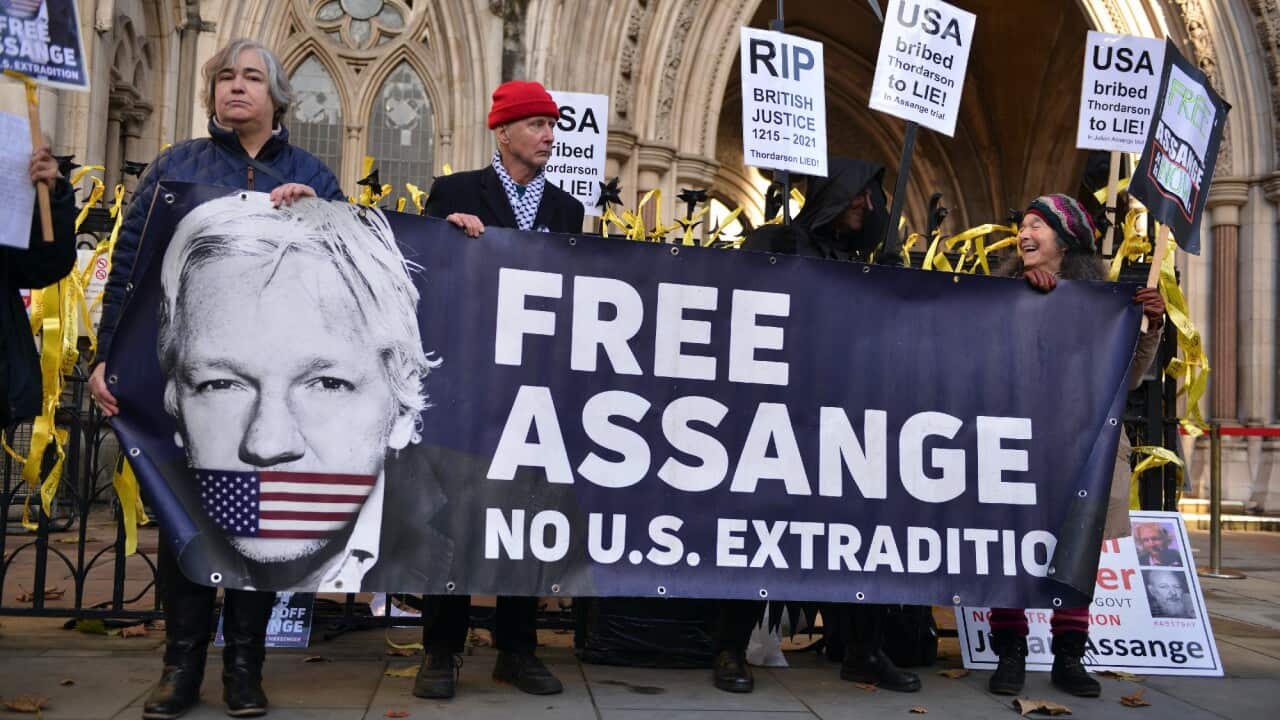 Supporters of Julian Assange urge his release outside of the Royal Courts of Justice in London. Source: AAP

The Australian government has been urged to weigh in on the case of WikiLeaks founder Julian Assange as supporters vowed to continue to fight against his extradition.

The United States won an appeal relating to the transfer of the 50-year-old, who is facing 18 counts relating to WikiLeaks' release of nearly 500,000 secret files on the conflicts in Afghanistan and Iraq.

The latest ruling, handed down in a judgment on Friday in London where Mr Assange is currently held in custody, meant his extradition moved a step closer but legal hurdles still remain.

Senator Rex Patrick told SBS News the Australian government has not placed enough pressure on the US and UK governments about the case but was hopeful "common sense will prevail".

He said: "We have a Deputy Prime Minister (Barnaby Joyce)
who spoke in support of Julian Assange while on the backbench
who is in Washington in quarantine.

“He could be using his time pushing his views, speaking to the (US) Secretary of State.

“The Deputy Prime Minister was very clear as to what the Government should be doing, but has remained quiet since he rejoined the cabinet.”

In a statement, Mr Joyce said: “My position remains the same. I, in no way, vouch for the character of Mr Assange having little personal knowledge of him and having never met him.

“In regards to the current UK proceedings, I note he was not in the US at the time of the action he is accused nor was he a US citizen at the time so should not be bound to US laws.”

The US said the release of the classified information put lives in danger, but Mr Assange's backers say the case is retaliation for his exposing of wrongdoing in overseas conflicts.

His fiancee, Stella Moris, said his legal team would appeal against the decision and said Friday's verdict at the Royal Courts of Justice in London was "dangerous and misguided".

"This goes to the fundamentals of press freedom and of democracy. We will fight," she said outside the court.

The ruling has been the subject of criticism from a range of campaign groups, as well as a number of politicians in Australia.

Labor MP Julian Hill said the Australian government “must stand up to the US and the UK and stop this extradition”.

In a series of tweets, he said: “Julian Assange, an Australian citizen is fighting for his life in London, as the USA seeks his extradition to face an effective death sentence.

“This Australian, who exposed US war crimes, is treated worse than a war criminal. He’s NOT receiving a fair trial.

“There will never be a legal solution to Julian Assange’s case. It is an inherently political witch-hunt.

“The Australian Government must stand up to the US and the UK and stop this extradition.”

"The PM must end this lunacy, pick up the phone to his counterparts in the US and UK, and urge them to release Mr Assange immediately and allow him to return to Australia. He is a hero, not a villain, and journalism is not a crime."

Greens senator Janet Rice added: "Julian Assange's prosecution has always been political. It's going to need a political response from our government to get justice for him."

And MP George Christensen, who introduced a private bill to address the illegal detention of journalists last month, titled "free Julian Assange", called on US President Joe Biden to drop the case.

He wrote on Facebook: “A foreign court just ruled that an Australian journalist - Julian Assange - should be extradited to another foreign nation to face trumped-up charges of hacking and espionage.

“This is an affront to freedom of speech and Australian sovereignty.”

Friday's judgment allowed an appeal from the US against a previous ruling that Mr Assange should not be extradited as he would likely commit suicide in a US prison.

In that appeal, the US sought to provide reassurances about Mr Assange's care, including pledges not to imprison him at the Supermax prison in Colorado.

It added: “The USA has also provided an assurance that they will consent to Mr Assange being transferred to Australia to serve any custodial sentence imposed on him if he is convicted.”

The legal wrangling will go to the Supreme Court, the United Kingdom's final court of appeal.

“The US government’s indictment poses a grave threat to press freedom both in the United States and abroad.”

While Nils Melzer, the UN's special rapporteur on torture, noted the court's decision came on the same day as Human Rights Day and expressed concerns about Mr Assange's health.

He said: “It's just like a car crash happening in slow motion and every now and then someone asking you to comment on what you're seeing.

“Well it's still a car crash happening in slow motion, we know exactly what's at the end of this.

“At the end, Julian Assange is crushed as a person and our rights have been done away with.”

The legal saga surrounding Mr Assange has lasted more than a decade, starting with the release of the classified documents in July 2010.

In 2011, a UK judge ruled Mr Assange can be extradited to Sweden but he appealed against the verdict, claiming the allegations are a pretext to his removal to the US.

He took refuge in the Ecuadorian embassy in June 2012 and stayed there until his citizenship was revoked in 2019.

In the meantime, Swedish prosecutors dropped the sex assault investigation.

Mr Assange was removed from the embassy by British police, and arrested on a US extradition request.

The charges facing Mr Assange are violations of the US Espionage Act by publishing military and diplomatic files and, if convicted, he faces a sentence of up to 175 years in jail.

A Department of Foreign Affairs and Trade spokesperson said they have made available consular assistance and continue to monitor the case.

"We are monitoring Mr Assange’s case closely, as we do for other Australians detained and subject to court proceedings overseas.

"We continue to offer Mr Assange consular assistance, and to seek his consent to discuss his health situation with prison officials. Mr Assange has not responded to our offers."

The spokesperson said Australian officials have talked to UK and US officials about legal due process and access to proper medical care for Mr Assange.

"The Australian Government has raised the situation of Mr Assange with US and UK counterparts – including our expectations of due process, humane and fair treatment, access to proper medical and other care, and access to his legal team – and will continue to do so."