Hundreds of Australians, including a 63-year-old woman who has been forced to delay her cancer surgery, remain stuck in Peru after it introduced strict border control measures to stem the spread of the coronavirus. 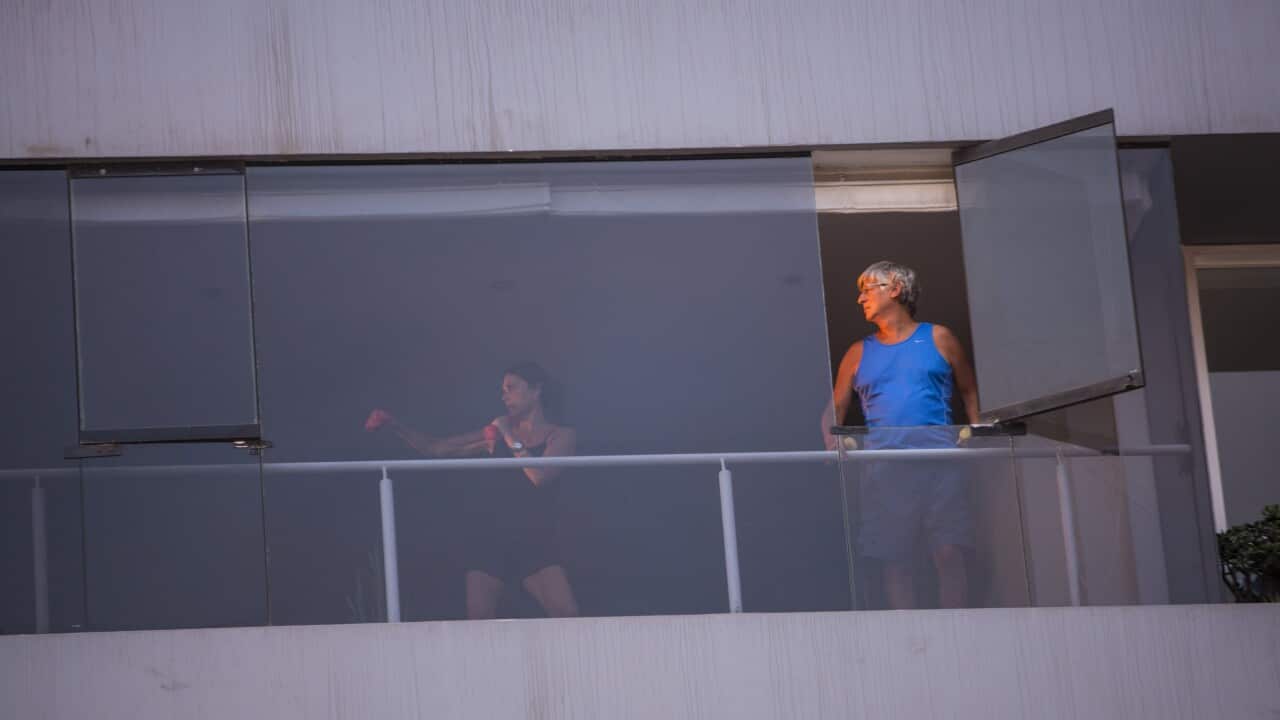 A women exercises inside her apartment in Lima during the coronavirus lockdown. Source: AP

Australian travellers stuck in Peru have been asked to pay more than $10,000 for a business class seat on an emergency flight home after the South American country locked down its borders last week.

As part of the strict measures introduced to control the coronavirus pandemic, Peru banned all commercial flights out of the country leaving hundreds of Australians stranded throughout the country.

On Thursday, it was announced Australian tour company Chimu Adventures would organise two emergency charter flights to Sydney out of Argentina and Peru, with assistance from the Department of Foreign Affairs and Trade (DFAT), at a cost of $5,160 per person for an economy ticket.

But days after the flights were announced, Australians were informed that economy seats on the charter flight from Lima to Sydney were full and only a limited number of business class seats remained for people willing to pay $10,872.

Concerns have also been raised over whether the flights will go ahead at all after people who had purchased tickets were told the flights had been delayed from their planned departure on Monday or Tuesday to later in the week.

The delay comes after Peruvian Defence Minister Walter Martos announced that airports and international road crossings in the country would close permanently on Saturday.

“Tomorrow is the last day that facilities are being given to foreigners to leave and to compatriots to return,” he reportedly told local television station Canal N.

Heather, who wished to only be identified by her first name, told SBS News she booked one of the economy seats on the emergency charter because she needs to urgently get home to Australia to have a breast cancer removed.

The 64-year-old travelled to Argentina and Peru for a two-week trip on her own after her doctor advised it would be fine, but expected to be back in Melbourne in time for a scheduled lumpectomy and subsequent radiology treatment on Tuesday.

She’s had to delay the surgery and said she’s worried about how crowded public hospitals will be when she’s finally able to get back to Australia.

“What that’s going to mean for me, I don’t know. But it’s a terrible concern that this could get quite a bit worse when it shouldn’t have been something that’s quite that bad,” she said.

Like other travellers, Heather is currently under lockdown in her room at the Miramar Hotel in Lima, which she moved to after being kicked out of her previous accommodation, and said she’s worried about whether the flight will go ahead.

“They [DFAT] might be working very hard behind the scenes but nobody has seen it here,” she said. “It just feels like they don’t care.”

A Chimu Adventures spokesperson told SBS News the flight would be taking off from a military facility later in the week despite the Peruvian government's statement, adding that the company was considering additional flights to meet demand.

"We are working with the DFAT and the embassies. They have been very professional and absolutely 100 per cent dedicated to getting Australians home," the spokesperson said.
Darrell Cruse is just one of a number of Australians stuck in Peru. Source: Supplied

Darrell Cruse, a 43-year-old construction worker from Western Australia, also told SBS News that he was hoping for a miracle from his hostel in Cusco, approximately 1,100 kilometres from Lima, after he was told economy seats on the flight had sold out.

“All these other governments are talking to get their people out … it just doesn’t feel like we are getting any support from the Liberal government,” he said, adding that he wasn’t in a position to pay $10,000 for a business class ticket.

Several foreign governments, including Mexico, Israel and Chile, have already evacuated their citizens from Peru.

Britain’s Foreign and Commonwealth Office also announced on Sunday that they had secured permission for a UK-organised flight to evacuate hundreds of British and Irish citizens from Peru “early next week”, the Guardian reported.

During a press conference on COVID-19 measures on Sunday, however, Prime Minister Scott Morrison did not commit to organising evacuation flights.

“DFAT are working on those consular cases, in particular where there are larger groups, Lima is a good example of that,” he said. “This is one of the many challenges we are working on.”

Many Australians have told SBS News they feel abandoned by the Australian government and have been forced to turn to Twitter and Facebook groups for consular advice.

In one desperate email to the Australian Embassy in Lima, seen by SBS News, 22-year-old Perth woman Ashlee Baker begged for “more communication because we are going crazy here”.

“This is not good for my mental health, I am crying every day and so scared about what is going to happen next,” she wrote.

“I’m running out of options and I’m worried that if I can’t get on this charter I will be left here for months. Please shed some light because I am really scared.”

Peru has introduced a curfew between 8pm and 5am, restricted people's activities in public and banned non-emergency vehicles, with people who need to leave their homes due to an emergency expected to carry a flag or white handkerchief.

Australia’s Ambassador to Peru and Bolivia - which has also declared a 14-day lockdown - Diana Nelson tweeted on Saturday that citizens trapped in Peru remained her “top priority”.

“The Embassy team continues to focus all our efforts on the situation,” she tweeted.

A DFAT spokesperson said the "Australian Government is working to assist Australians in Peru with the Peruvian Government, likeminded embassies, airlines and travel companies, to identify and facilitate possible travel options for Australians".

On Tuesday last week, the Federal Government urged all Australians overseas to return home before raising the travel advice for the entire world to “do not travel”.