Many people with autism have never held a paid job, but at an innovative program is helping some young entrepreneurs break the cycle. 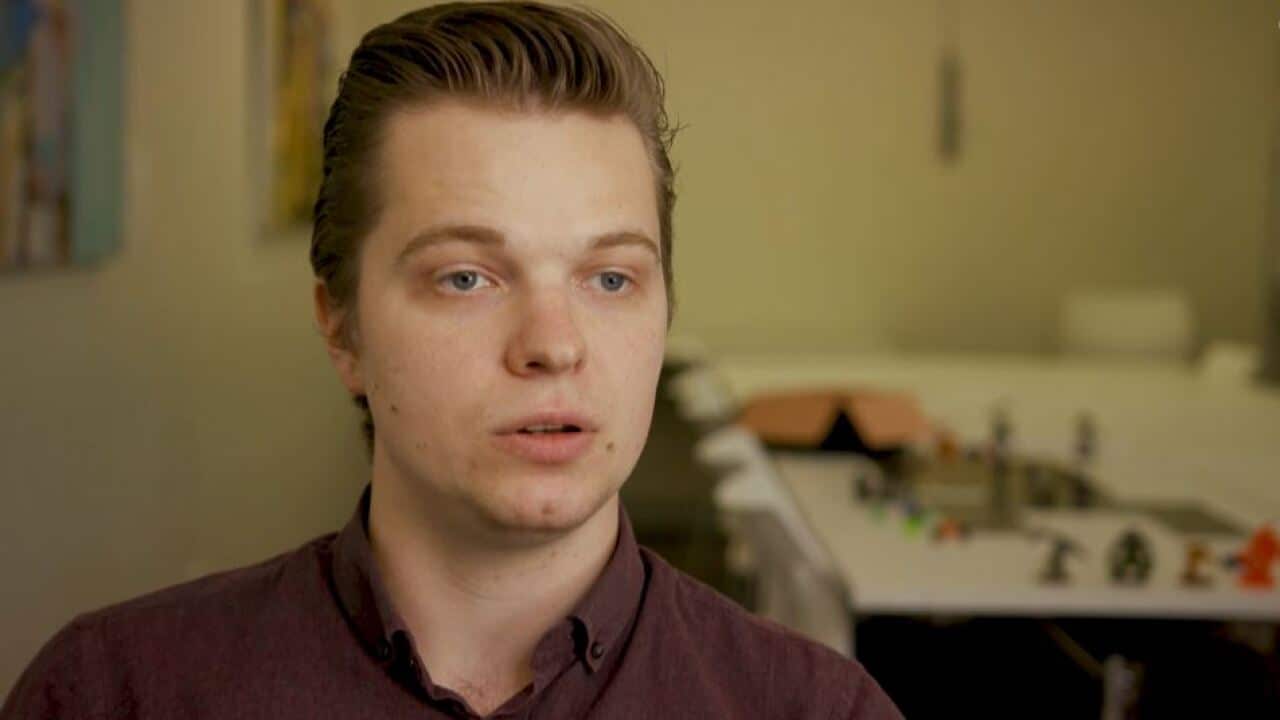 Of the 250,000 Australians diagnosed with autism, fewer than half have ever held paid work, despite having the skills and qualifications.

That was the finding of a new study commissioned by autism body AMAZE.

Of those who do gain work, more than 20 per cent say they have lost a job due to their symptoms.

Advertisement
The bleak picture for job-seekers with autism was highlighted for World Autism Awareness Day on Tuesday, 2 April.

Haydn Payne is among 250,000 people diagnosed with autism, and sensitivity to sound is a common symptom. Source: SBS

Extreme sensitivity to sound affects some people with autism and is one of many sensory issues that can limit career options.

“If I am so overloaded that I can’t even drive home 'cos the world is spinning around me like a top, it’s not conducive to a 9-5 job,” says Australian Haydn Payne, who was diagnosed as a teenager.

“As a child, I hated myself and my differences. I grew up in a rural town where everyone loved football and nerds were there to be bashed. And that’s what happened to me.”

As a child, I hated myself and my differences ... nerds were there to be bashed. - Haydn Payne

Now an adult, Haydn mentors others with autism through group sessions.

“I've had parents coming up to me afterwards, crying and hugging me and going ‘I finally get my kid’," Haydn said.

“And I cried the first time it happened because I realised I’m not alone either.”

Unemployment is six times higher for people diagnosed with autism than for those without a disability, the new research by the Centre for Health and Social Research and Australian Catholic University has found.

"There is gross underemployment for autistic Australians, and their abilities are underestimated and underutilised in the workplace,” AMAZE CEO Fiona Sharkie said.

Yet 70 per cent of Australians believe employers should make adjustments for employees with autism in the workplace, the research found.

Haydn's podcast helps others with autism to sense of their symptoms. Source: SBS

As well as Haydn's group work, he is starting a small business called Spectrumite mentored by a community organisation Settlement Services International (SSI), through its IgniteAbility Small Business Start-ups program.

“The bottom line is, if I don’t start this business, I'm going to be on welfare for the rest of my life,” he said.

Teams work with Haydn to develop his informative podcasts that aim to assist young people with autism to make sense of their world.

“I have a huge auditory response, so I wear active noise-cancelling headphones to block out most of the world,” Haydn said, outlining a common and often debilitating symptom of autism.

“You walk through the doors of a supermarket, you hear them close, it’s like walking into a soup of noise and sound engulfs you, it envelops you, it squeezes you.”

“The noise through the electric fluorescent lights, it never goes away and the longer you stay in that environment, [the more] your senses will start to fail. All the sounds distort, I feel like I’m going to be sick, if I’m there long enough I will be sick. And it’s horrible, absolutely horrible”.

Specialist Merenia Marin mentors people with a disability into their own small business. Source: SBS

“We put around Haydn an eco-system of support including a marketing business plan, and we will help him up to launch,” SSI IgniteAbility specialist Merenia Marin said.

Haydn’s podcast is among a number of projects supported by IgniteAbility.

“There are 98 people in the pipeline who’ve been referred into the program, and 30 business start-ups. It’s extraordinary, it’s a unique program and it’s something we’re very proud of,” SSI CEO Violet Roumeliotis said.

There are 98 people in the pipeline, and 30 business start-ups ... it’s a unique program and something we’re very proud of. - Violet Roumeliotis, IgniteAbility

Teaching assistant Thomas Kuzma is another entrepreneur who is starting a small business called TK Hubworld. His internet broadcasts are based around characters in popular video and board games.

“As an autistic person I found through role-playing games, I could understand the world I live in, as a safe environment.”

“Thomas came to us wanting to be a public speaker and an MC, but it was pretty obvious early on that his true passion was gaming, and the autism spectrum space,” Ms Marin said.

With financial guidance and mentoring, Thomas hopes soon to take his business idea to the next level.

SBS Life: What it is like being diagnosed with autism as an adult

Nicole Rogerson is CEO of Autism Awareness Australia. Her son has autism.

Ms Rogerson welcomes IgniteAbility’s small business initiative as an alternative to unemployment but says it won’t work for everyone.

“Autism is a spectrum disorder, and it’s a very wide spectrum, so for some individuals running their own company might be a little out of reach,” Ms Rogerson said.

Services for adults with autism are extremely limited in Australia, she said, and called for more resources to help young adults bridge the gap between school and finding gainful employment.

“We want to make sure that people with disabilities are placed in appropriate employment, and when it works in both ways in both categories, it’s just a wonderful outcome,” Ms Rogerson said.