The Therapeutic Goods Administration said Moderna would be able to be used as a booster regardless of what COVID-19 vaccine brand people received during their first two doses. 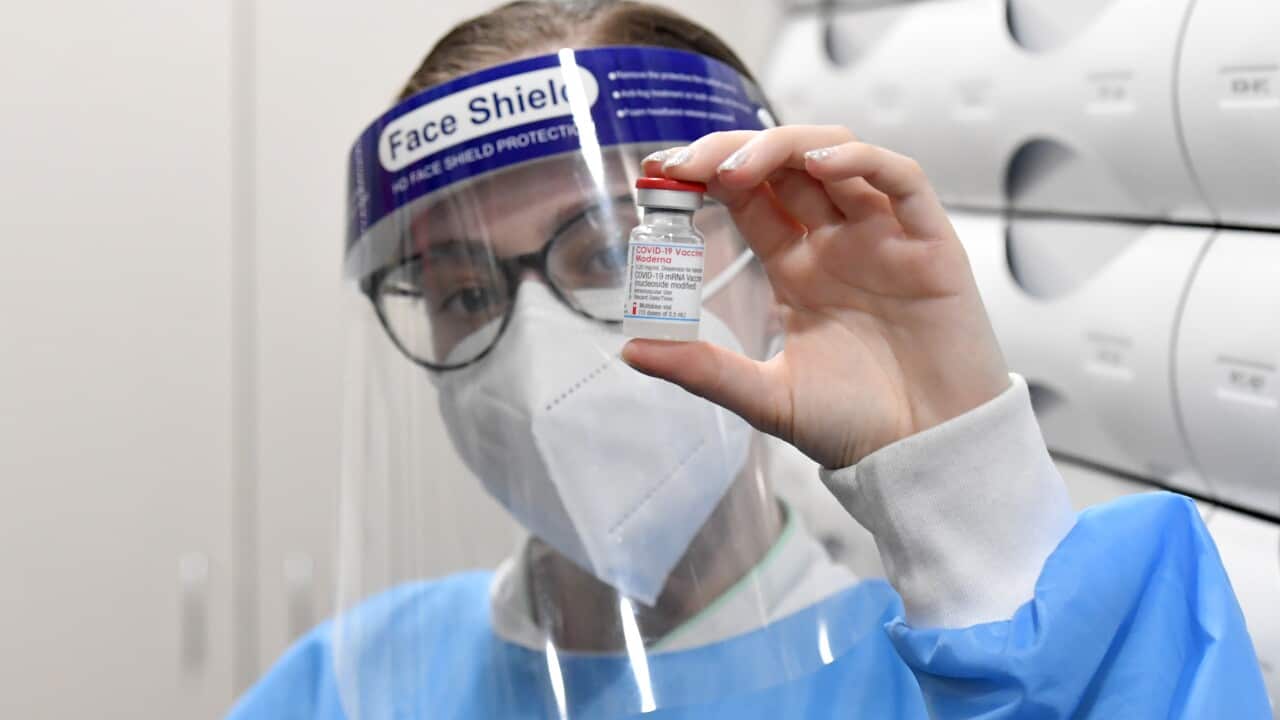 A pharmacist holds a vial of the Moderna COVID-19 vaccine. Source: AAP

Australians will now be able to choose between two types of COVID-19 boosters, after the medical regulator gave provisional approval to the Moderna vaccine to be used as a top-up dose.

The Therapeutic Goods Administration (TGA) gave the green light for people 18 and over to get a Moderna booster shot, six months after their second vaccine dose.

The TGA said Moderna would be able to be used as a booster regardless of what COVID-19 vaccine brand people received during their first two doses.

Advertisement
It comes after the Pfizer vaccine was approved to be used as a booster shot.

More than 500,000 Australians have received their third vaccine dose since the boosters were made available.

The administration said the Moderna booster was approved following the evaluation of safety and efficacy data.

European Union health authorities have backed using a mix of COVID-19 vaccines, saying it could in some cases produce a better response than a single jab.

The best results came from using a so-called viral vector shot such as AstraZeneca or Johnson & Johnson first, followed by messenger RNA (mRNA) jabs like Pfizer and Moderna afterwards, they said.

The so-called mix-and-match approach "can be used for both initial courses and boosters", the European Medicines Agency (EMA) and European Centre for Disease Prevention and Control (ECDC) said in a joint statement.

It could also give countries flexibility as they deal with a spike in COVID-19 cases, particularly if they are short of stocks of a particular vaccine, they said.

Many European countries have already started giving follow-up booster doses six months after the initial course of COVID-19 vaccines due to waning immunity.

"Evidence from studies on heterologous vaccination suggests that the combination of viral vector vaccines and mRNA vaccines produces good levels of antibodies... and a higher T-cell response than using the same vaccine," they said.

The Pfizer COVID-19 vaccine will be able to be administered to children aged five to 11 from 10 January next year. Source: AAP

The body's T-cells are a secondary level of defence against severe illness after the front-line protection given by antibodies.

Some studies suggested that side effects such as pain, fever, headache and fatigue were stronger from the so-called "mix and match" approach but results were "not consistent", they added.

The EU has so far given approval to four COVID-19 vaccines.

The Messenger RNA vaccines made by Pfizer/BioNTech and Moderna use new technology that teaches the body's cells to make a harmless piece of protein found on the surface of the virus that causes COVID-19.

This prompts the immune system to develop antibodies that can fight off the real thing in case of infection.

The more conventional, but still relatively new viral vector approach used by AstraZeneca and J&J uses a genetically engineered version of the common cold adenovirus as a "vector" to shuttle genetic instructions into human cells.

The two agencies said COVID-19 hospitalisations and deaths were lowest in EU states with the highest vaccination rates, irrespective of what vaccines were used.

They urged countries to continue with social distancing and other hygiene measures to keep infections down.