The Department of Home Affairs has confirmed to SBS News it has redirected resources and brought on new staff to address its visa backlog, as concerns persist over the impact on applicants and businesses. Here's what we know so far about the plan. 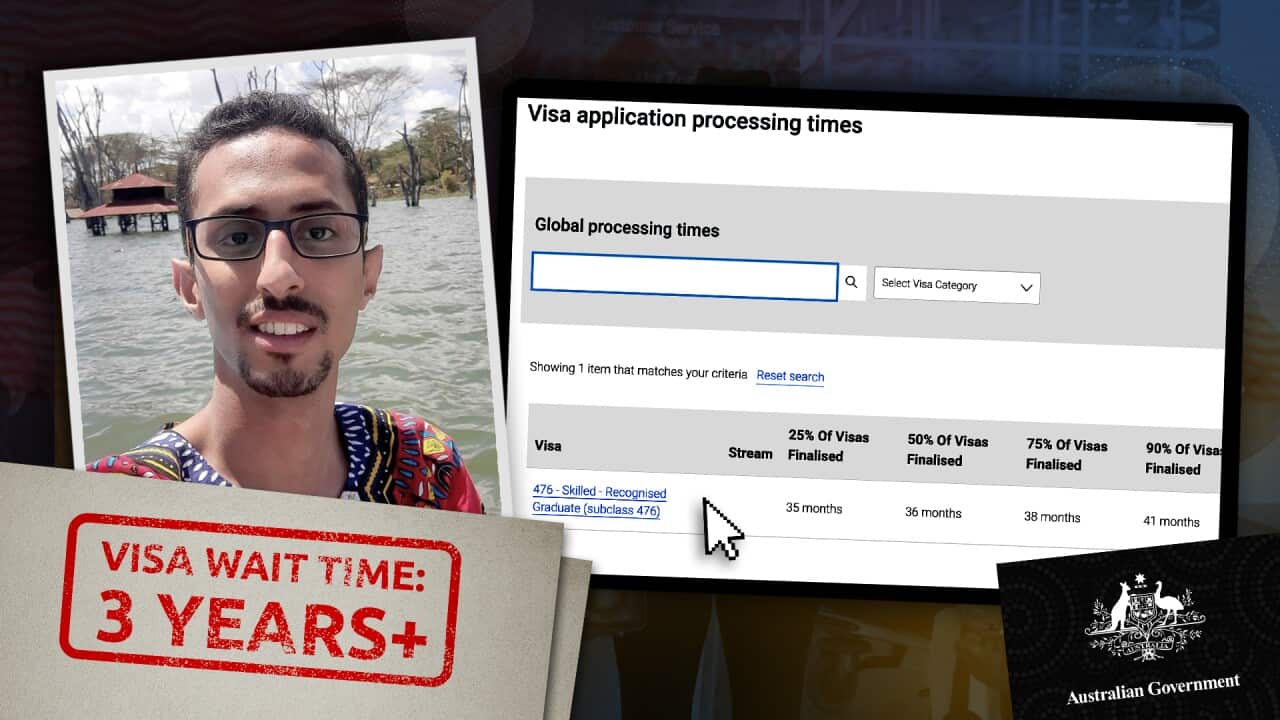 Engineer Abdo Gamal Taher has been waiting since 2019 for a response to his Australian visa application.

Australia’s visa backlog is exacerbating processing delays and prompted the new Labor government to name the problem as a priority to be fixed since coming to power.

The Department of Home Affairs has confirmed to SBS News it has redirected resources and brought on more staff to address the challenge, but concerns remain that the gridlock won’t be easily overcome and will still take time to resolve.

Abdo Gamal Taher, 26, is an engineer from Yemen who left behind conflict in his country to pursue his career in Nairobi, Kenya. His dream is to one day take his skills to Australia, but despite applying for a visa targeting engineering graduates back in May 2019, he’s been left waiting for approval.
Advertisement
Abdo Gamal Taher has applied to come and work in Australia.
“It’s a golden chance. It is a golden opportunity [to work in Australia],” he said. “The process is completely slow. Applicants are being held - are being trapped - while you can get a benefit out of them.”

The 476 visa he’s applied for allows applicants to live, work or study in Australia for up to 18 months, but its wait times have blown out to up to 41 months.

The visa backlog is a lasting impact of the COVID-19 pandemic after resources within the Department of Home Affairs were directed towards enforcing Australia’s international border closure and the administrative burden of travel exemptions.

Applicants are being trapped while you can get a benefit out of them,
Abdo Gamal Taher, Visa applicant

It means that despite the border reopening to visa holders last December, businesses are still waiting months to bring in staff to fill skill shortages, while applicants continue to face delays on their applications to come to Australia.

“We have put people from other duties into trying to clear the visa backlog that clearly is something that’s required,” he said on 17 June.
Prime Minister Anthony Albanese says his government has put on extra staff to help clear the visa application backlog. Source: AAP / LUKAS COCH
A Department of Home Affairs spokesperson has since confirmed to SBS News its intention to reduce visa processing times and the number of submitted applications.

"This will involve sustained effort over coming months to reduce on-hand pipelines for temporary visa applications," they said.

The department has described the response as developing a so-called “surge capacity” comprising staff from across the department and Australian Border Force.
READ MORE
Skilled migration and visa backlog in focus at Anthony Albanese's first National Cabinet meeting
The spokesperson said this was expected to further boost its visa processing capability to reduce the number of on-hand applications.

“In addition, officers previously focused on the processing of travel exemptions associated with Australia’s border restrictions have now been redirected,” they said.

“These officers have recently commenced and the Department’s recruitment efforts are continuing at scale,” the spokesperson said.

The department would not tell SBS News how many staff it had brought on to help clear the backlog.

‘This will take time’

Former deputy secretary of the immigration department, Abul Rizvi, said even with additional resources, resolving the problem would not be a quick fix.

“This will take time," he said.

"We will have a better idea about how the government is going to go about it in the October budget - that will be where it will address some of the critical questions."

Mr Rizvi added that the loss of a “client service culture” at the department, as well as changes to visa design had reduced its efficiency and needed to be addressed.

“Moving staff who were previously working on travel exemptions, that's a good thing,” he said.

“If, however, they end up moving staff from other processing areas that may end up just being an issue of 'robbing Peter to pay Paul'".
READ MORE
‘Absolute gridlock’: The migration and visa challenges facing the new government
The department is also facing an $875 million budget cut, based on the previous Coalition government’s March budget update. It's something the Labor government must now choose whether to address when it hands down its first budget in October.

Demand for humanitarian visas is another pressure on the system, including Australia's commitment to deliver 31,500 places to people from Afghanistan over four years. Mr Rizvi said in addition there were around 130,000 people alone seeking asylum already living in Australia, as well as some 360,000 people on bridging visas.

"That's a staggering number," he said.

Migration agent and lawyer Ben Watt said he is among those with clients facing the personal consequences of visa delays.

"We’ve got an enormous number of applications both in Australia and overseas who had made applications for visas and they haven’t been processed yet,” he said.

“Quite often [for clients] it’s beyond frustration - it’s a big detriment to people's lives and [their] ability to move on and settle and plan ahead for the future.”
READ MORE
Australian visa changes for 2022-23 and what a new government may bring
There are economic implications too. State and territory leaders are among those to voice their concerns about the visa backlog hampering efforts to address skill shortages.

Melbourne-based hairdresser Joey Scandizzo said his business is hoping skilled visa holders can help them recoup losses suffered because of the pandemic.

“As an industry we're struggling to get staff to look after our clients.”

“If we can get some support from the government, get more hairdressers here at home - it would make it so much easier for us as a business to continue to grow and make back some of those losses over those two years we were closed down."
Joey Scandizzo wants to hire more workers from overseas. Source: AAP / JULIAN SMITH
National Farmers Federation President Fiona Simson said the agriculture sector is also facing workforce shortages.

“It's very frustrating for farmers to have people that are sitting in their own countries waiting for their visas to be processed for sometimes many months,” she said.

“We need to make sure that we can address the administrative requirements of the backlog - we need to keep bringing people in to fill these important jobs.”

Official information about visas and immigration can be found at Australia's
Department of Home Affairs website
.
Share
6 min read
Published 9 July 2022 at 7:03am, updated 9 July 2022 at 7:57am
By Tom Stayner
Source: SBS News
Tags
Australia