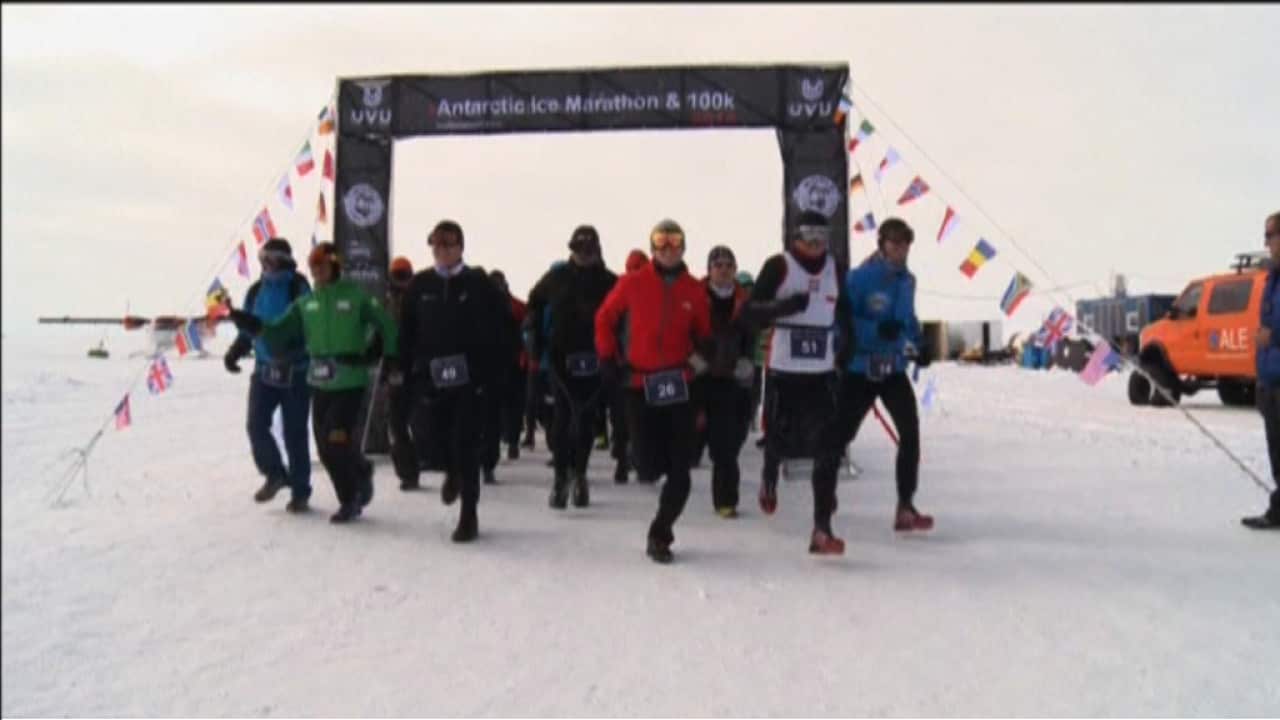 Snow, ice and sub-zero temperatures aren't ideal conditions to run a marathon, but 50 athletes from 17 countries braved the freezing conditions to complete the 10th annual Antarctic Ice Marathon.
The event at the bottom of the world attracted competitors from Argentina, Australia, Belgium, Brazil, China, France, Germany, Great Britain, Hungary, Italy, Japan, Latvia, Norway, Poland, Romania, South Africa and the United States. They set up camp together in the Union Glacier in Antarctica.
Advertisement
The 42-kilometer race was originally planned for November 18 but three days of bad weather delayed the start. Even the most experienced runners admitted to having a case of the nerves ahead of the marathon.
"There's just so many unknowns actually going into this: the weather, the terrain, running in all these clothes. It'll be a learning experience as we go along. We'll just see how we get on," explained British competitor and eventual second place winner Nicholas Horsfall.
When the race got underway, the runners were challenged with an average temperature of -15°C, which sometimes became lower with the wind chill factor.
The marathon is said to be particularly exhausting because of the underfoot terrain of the snow.
Hydration is crucial and the skill is to maintain a good core body temperature - never becoming too warm and sweaty or too cold.
Each runner has to be physically fit to face the elements and harsh environment. Essential gear includes a full balaclava, goggles, gloves and mittens, long johns, waterproof running pants and various layers of thermal clothing under a shell.
The competitors ran two laps of the course around the Union Glacier exploration camp, which was designed mainly for safety reasons. There were several rehydration stops on route with hot drinks, snacks as well as toilet facilities.
The stunning Antarctic scenery adds to the splendour of this unique event, which many see as the one of the most extreme races in the world.
In the men's race, Union Glacier's very own meteorologist Marc DeKeyser set the early pace alongside Briton Nicholas Horsfall. The 48-year old Belgian broke away to take the lead and won the race in 4:12.21 hours.
"Yeah, it was hard," he said. "The weather was good but the surface was so soft. It was hard work. But I'm a happy man."
He was followed some four minutes later by Horsfall who said he was feeling "chuffed" and wanted a cup of tea. Coming in third in the men's race was Hungarian Istvan Toth.
In the women's race, France's Fredrique Laurent was victorious and crossed the line with a time of 5:16.15 hours. Australian Lyn La Canna and South African runner Genevieve Pearson took second and third positions respectively.
Although clearly drained, all the competitors commented on the beauty of their surroundings.
"The most amazing race I've ever run in such a pristine, beautiful environment, couldn't ask for more," said American runner Samir Patel.
"Most beautiful marathon I've ever run. Most memorable. It'll always be the most memorable," added his compatriot Heather Carr.
At the end of the day, the athletes rested their aching and bruised feet, while their running gear was washed and hung out to dry outside in the barren, icy landscape.
SHARE
3 min read
Published 25 November 2014 at 8:12am
Source: SBS