An eight-year-old boy has been diagnosed with coronavirus, taking the number of confirmed cases in Australia to 13 people, as the government gets ready for more Wuhan evacuees. 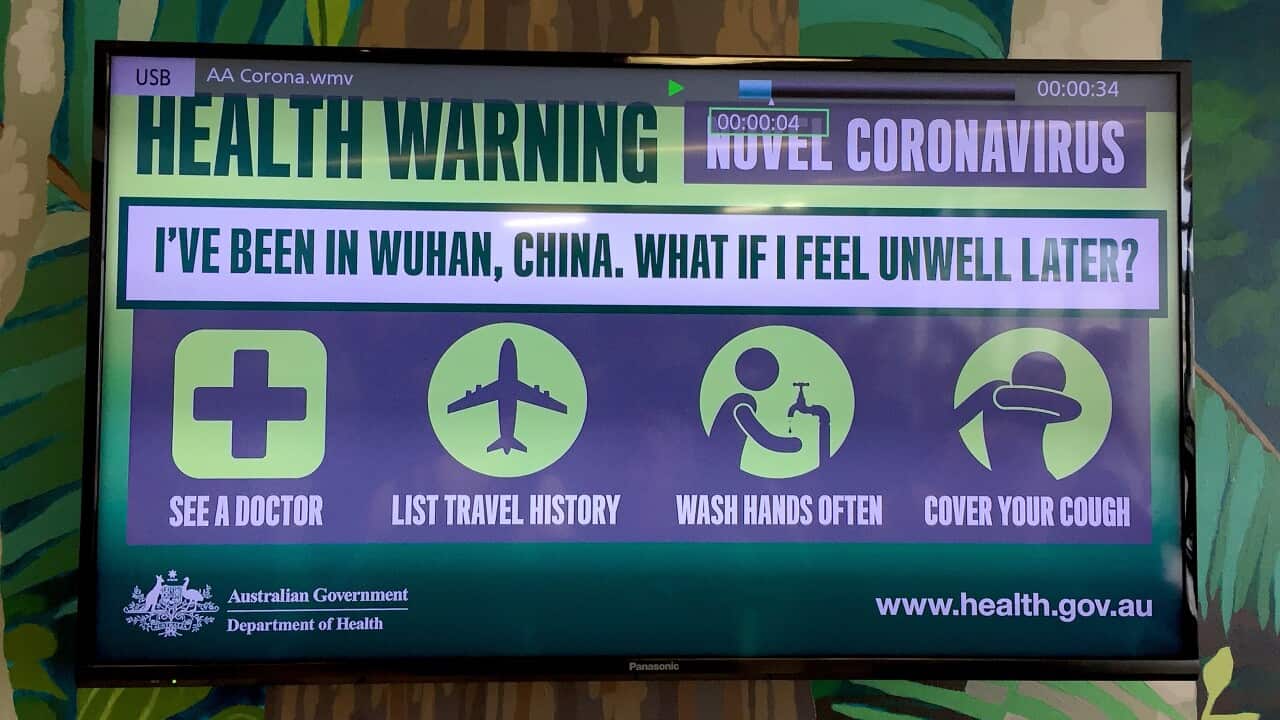 A sign on display in the airport arrival hall on Christmas Island. Source: AAP

Australia now has 13 confirmed cases of the deadly coronavirus after an eight-year-old boy was diagnosed and isolated in a Queensland hospital.

The child, from Wuhan which is the epicentre of the virus outbreak in the central China province of Hubei, was a member of a tour group travelling in Australia in late January.

Two other people from that group, a man, 44, and a woman, 42, also had the virus and Queensland health authorities had been scrambling to contact other people on their flights in case the infection had spread.

The case of the boy takes the number of confirmed cases in Queensland to three, adding the four cases in each of NSW and Victoria and two in South Australia. The nation infection rate now stands at 13 people.

Meanwhile, a group of 35 Australian citizens and permanent residents stranded in Wuhan left the city on Wednesday on an Air New Zealand flight evacuating 98 Kiwis and a number of others to Auckland.

From there, they will be transferred to Christmas Island, off the north-west coast of Western Australia, to join about 241 other evacuees in quarantine for up to 14 days.

The first group arrived on Monday and Tuesday after travelling from Wuhan on a Qantas flight. They included a man and his heavily pregnant wife who were instead taken to a Perth hospital because there are no maternity services on the island.

So far, there have been no confirmed cases of coronavirus infection among the men, women and children already on Christmas Island.

The Air NZ plane is due to land in Auckland around 4.30pm AEDT.

The government is negotiating to set up a second evacuation flight from Wuhan and Mr Morrison has warned those Australians still in China there was no guarantee of another.

Up to 600 Australians initially registered for an evacuation flight but some have decided to remain.

Globally, 490 people - mostly Chinese citizens - have died from the virus and the number of confirmed cases stands more than 24,000.

Federal Health Minister Greg Hunt said it was likely the Australians on the Air NZ flight will be met by officers from Australian Border Force and the Department of Foreign Affairs and Trade when they arrive in Auckland.

"The advice I have is that if they are to come to Australia, if they're not housed in New Zealand, then ... we'll be supporting them on Christmas Island," he said.

A team of specialist doctors and nurses is closely monitoring the evacuees, who were flown out of Wuhan on a Qantas flight on Monday.